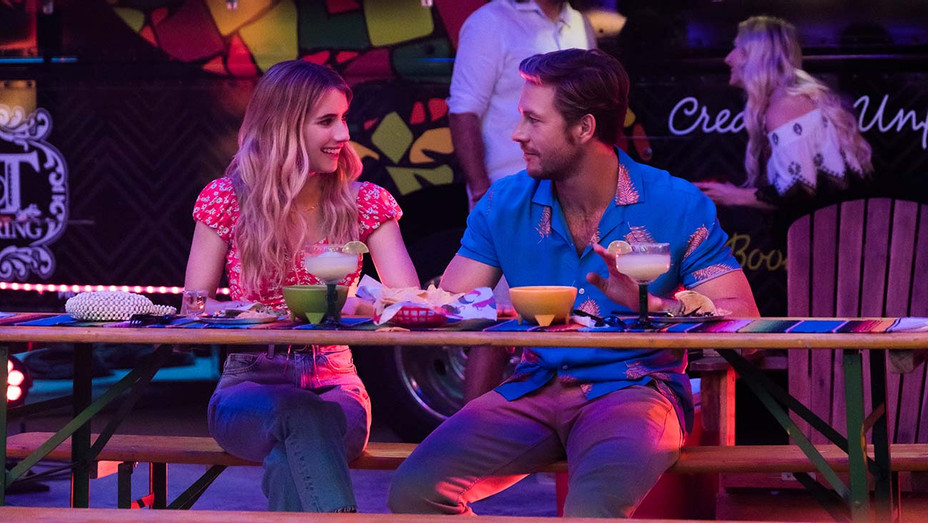 Once upon a time, long ago in a far away land called youth, I really enjoyed romantic comedies. But much in the same way I realized that real archeologists didn’t actually fight very many Nazis and Cheez Whiz wasn’t really food, the disconnect between simplistic movie romance and real relationships soured me on the genre as I got older. There was the occasional film, like Music & Lyrics, that I still found enjoyable, but overall, the genre also got worse and worse, with the last golden age of the fluff romcom ending in mid ’90s, and the only ones worth seeing since have been films such as Eternal Sunshine of the Spotless Mind or Silver Linings Playbook, films that transcend the trappings of the genre.

Holidate follows a year in the lives of Sloane (Emma Roberts, American Horror Story) and Jackson (Luke Bracey, The November Man, Point Break), two strangers who meet by chance at a mall after Christmas. They begin lamenting about being single on holidays, where they face constant judgment from their meddling families. So when Sloane mentions her crazy aunt (Kristin Chenoweth), who finds a different, no-strings-attached “Holidate” for every event, Jakson embraces the idea, taking it a step further, and the two agree to be each other’s platonic “holidate” for every festive occasion in the year ahead. But as the year goes by and they spend more time together, real feelings start to develop, and a question arises: Do they risk the good thing they have going to try for something more?

Director John Whitesell (Malibu’s Most Wanted, Big Momma’s House 2 and 3) doesn’t have a strong handle on flow or visual technique, and the script by Tiffany Paulsen (Nancy Drew, the Adventures in Babysitting remake) is a hot mess. It works well enough when it’s just trying to be sweet and cute holiday romantic fare, but the constant onslaught of raunchy sex talk, f-bombs and “oops, turns out that was a laxative” bits leave you wondering just who they are trying to target with this movie. I’m not against a romcom with an edge to it, but this is more like a butter knife with jagged teeth.

In terms of Holidate‘s cast, Roberts and Bracey have charm and chemistry. Roberts seems literally made for the genre, and Bracey, a likable actor who has had some a string of bad luck, really sells his cheesy “you had me at hello” speech. Jessica Capshaw, as Sloane’s older sister, could really be doing something with some decent dialogue, but Chenoweth and especially the great Frances Fisher (Unforgiven) are wasted as the promiscuous aunt and nagging Mom, respectively. Meanwhile, cinematographer Shane Hurlbut (Terminator: Salvation), who will always be known as the guy that Batman went batshit on, seems to be content enough to be on a low-pressure set that he’s happy with flat and presentable being his calling card.

Honestly, Holidate doesn’t have a terrible premise—at least by romcom standards—and the framing device of starting and ending at Christmas allows for getting away with a certain sentimentality, as long as they sell it (though I feel the need to point out that there are Halloween and Thanksgiving segments, so people who put up skeletons in August but throw a hissy fit that it’s too early for Christmas can just chill out). Still, it could have offered a nice alternative to the Hallmark Channel, but the lack of a clear vision, the misguided attempts to be an “adult” comedy and the general laziness ruin what could have been a palatable romantic holiday treat. Instead it’s a stale fruitcake. –Patrick Gibbs