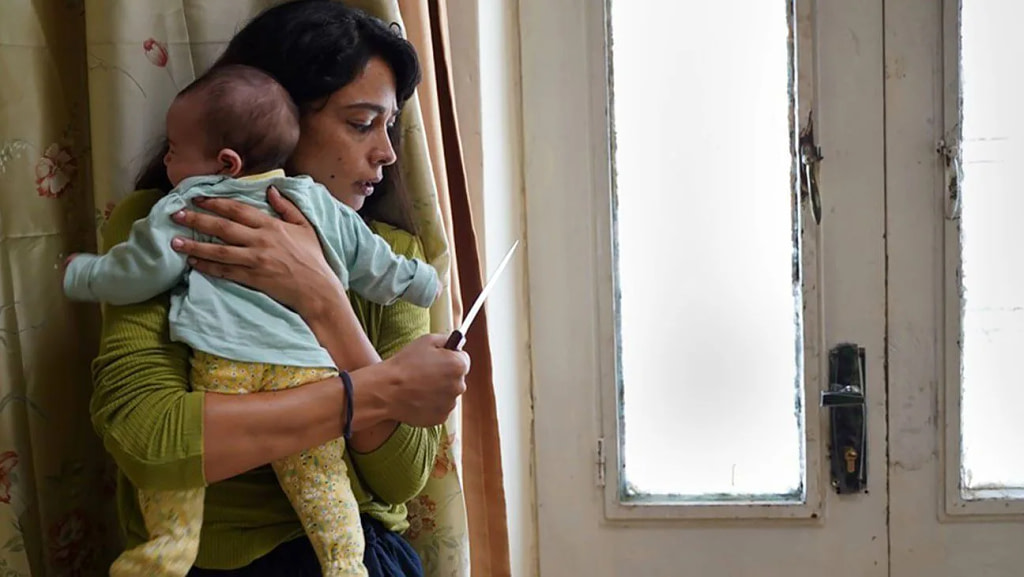 Huda’s Salon doesn’t provide any easy answers, nor does it try to do so, but it does offer a provocative look at the realities of living in occupied territory. Photo Courtesy of H&A Productions and Philistine Films.

Let’s be honest: If you’re going to the movies this weekend, you’re planning on going to see The Batman, and I can hardly blame you for being drawn to Gotham City. But if you find yourself wanting to experience a real-world setting that is even more intense and complex, Huda’s Salon is the place to go.

Huda’s Salon takes place in the occupied city of Bethlehem, which has a predominately Muslim and Palestinian populace, is encircled by Israeli settlements and the West Bank barrier. Reem (Maisa Abd Elhadi), the young mother of a newborn daughter, is getting her hair done by Huda (Manal Awad), a friendly and much sought after hairstylist, and the two engage in small talk and gossip. Reem suddenly starts to feel strange and blacks out. It is then that Huda puts Reem in an unthinkable situation in order to blackmail her into working for the Israeli secret service. For Reem, to do so would make her a traitor, but if she doesn’t agree, she risks dire consequences, the least of which would be the loss of her controlling and jealous husband, Yousef (Jalal Masarwa). Reem must think quickly, try to stay calm and pray that she’s not as completely alone as she feels.

Writer-director Hany Abu-Assad, best known for his Oscar-nominated 2005 masterpiece Paradise Now, is a gifted artist who knows how to build incredible tension, and his stories tend to put characters in situations that are unimaginable to westerners but all too real in his corner of the world. While Huda’s Salon isn’t as groundbreaking as Paradise Now, it shares much of the same approach as that film, following the characters with a certain detachment that rarely lets us quite get in their heads but refuses to make blanket judgements about anyone. Huda’s actions are despicable, yet during her ruthless interrogation by a Palestinian officer, Hasan (Ali Suliman, Tom Clancy’s Jack Ryan), it becomes chillingly clear that the situation is hardly black and white, and it’s never as simple as rooting for good guys or bad guys or just causes versus unjust ones. Abu-Assad favors a realistic approach that abandons many of the trappings of cinematic artifice, favoring long takes, wide angles and little in the way of musical underscoring.

The cast is stellar, with Suliman and Awad so utterly captivating in their scenes together that it’s hard to look away. Elhadi makes a very believable and sympathetic protagonist. If there’s a major shortcoming of Huda’s Salon, it’s that it doesn’t provide much in the way of insights into the world in which it takes place, apart from the obvious fact that it’s a dangerous place to be and that one must be very careful with whom they trust. I wouldn’t go so far as to call this a failing—Abu Assad doesn’t try to make movies that answer impossible questions, choosing instead to simply to tell stories about the people who grapple with them—but Huda’s Salon doesn’t quite have the same kind of unforgettable and thought-provoking impact that Abu-Hassad has given us in his best work.

Huda’s Salon doesn’t provide any easy answers, nor does it try to do so, but it does offer a provocative look at the realities of living in occupied territory, as well as the dangers and moral intricacies of trying to balance survival and loyalty with a sense of right and wrong. If you’re looking for an involving thriller with no capes or masks, one which won’t require you to set aside your entire day, I would definitely recommend making an appointment at Huda’s Salon. –Patrick Gibbs