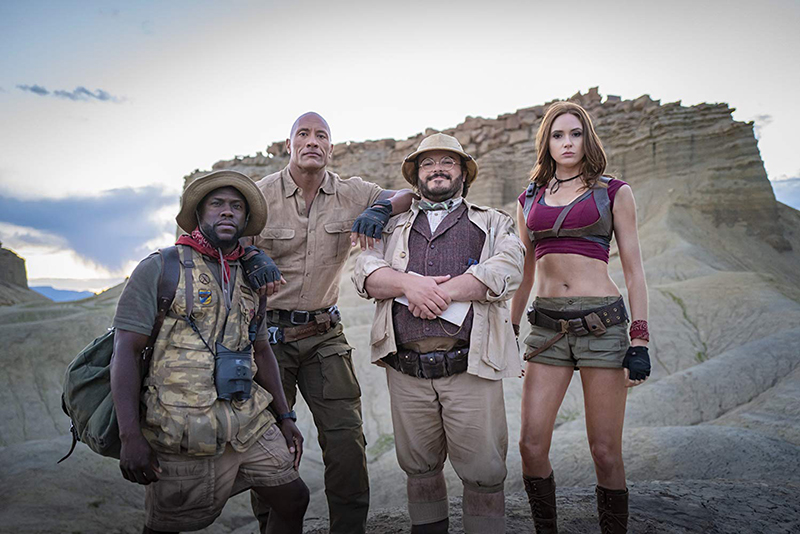 Film Review: Jumanji: The Next Level

Despite the absence of the greatly missed Robin Williams, Jumanji: Welcome to the Jungle was a surprisingly solid reboot/sequel, with a lot of clever ideas and fun performances, including what is arguably Dwayne “The Rock” Johnson’s best performance to date (which is hardly an amazing feat, but it’s not nothing, either).

Jumanji: The Next Level picks up with the main characters coming home for Christmas after their first semester in college.  Spencer (Alex Wolff), has secretly kept the pieces of the broken video game system. In a moment of weakness, feeling lonely and wanting to feel the self confidence that came with being Smolder Bravestone (Dwayne Johnson), he rebuilds the game and goes back inside. The rest of the gang comes to the house looking for Spencer, and instead find his Granpda Eddie (Danny DeVito) having lunch with his friend Milo (Danny Glover).  The gang finds the Jumanji game and goes back in to save their friend, accidentally bring Milo and Eddie along for the ride.

This is very much a sequel to a sequel, and there’s not a lot of freshness to it. The gag of having the old men in the bodies of Johnson and Kevin Hart is hit and miss, with the former having a hard time pulling off a convincing DeVito impression. The film’s first hour stumbles a bit, mostly because writer/director Jake Kasdan doesn’t fully commit to letting Martha/Ruby Roundhouse (Karen Gillan) be the true protagonist of the story in Spencer’s absence, which is a shame considering Gillan’s charm.  But on the plus side, the actors are all clearly having a lot of fun, and when Johnson tones down the impression and just plays the character of Grandpa Eddie, he’s terrific. Johnson rarely gets to show a vulnerable side on screen, and the best part of these films is that they force him to dig deeper and give a more internal performance. Jack Black once again anchors the film, and Awkwafina (The Farewell) has some great moments as a new avatar.

Jumanji: The Next Level is a movie to go into with reasonable to low expectations, and to have fun. And fun it is, with plenty of action, steady laughs and even a subtle and clever shout out to the original 1995 film. If you’re a fan of the franchise, you should find this a highly entertaining, if less inventive, entry in the series. –Patrick Gibbs