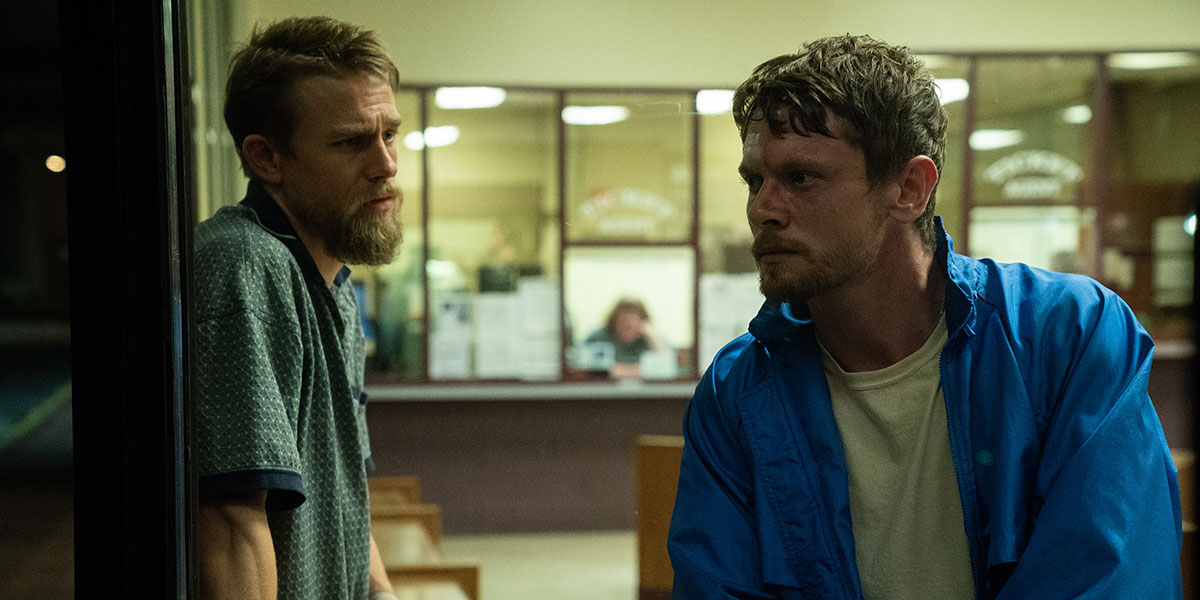 Now that November is here, not only are we starting to get inundated with Christmas movies, but the serious films with Awards aspirations are coming out in force. This week, the underground boxing drama Jungleland, which premiered in September at the Toronto International Film Festival, is coming out swinging, but the smart money says this doesn’t make it past the first round.

Stanley Kaminsky (Charlie Hunnam, Pacific Rim, King Arthur: Legend of the Sword) is a two-bit hustler in Fall River, Massachusetts, desperate to make his mark in the world and provide for his kid brother, Walter, aka “Lion” (Jack O’Connell, Unbroken). Fall River, Mass. But Lion is also Stanley’s meal ticket: He’s a scrappy and ferociously talented fighter, competing in as many amateur bare-knuckle bouts as Stanley can line up. The pair hope to one day get back to the pro circuit, after having been banned because of Stanley’s less-than-successful hustles.

When Stanley fails to pay back a dangerous crime boss (Jonathan Majors), the brothers are given one last big shot, but it comes with a condition: Deliver a package to a crime boss on their way to Jungleland, a high-stakes tournament that is a big opportunity for the brothers to make their fortune. But the “package” happens to be a troubled young woman named Sky (Jessica Barden, The End of the F***ing World), who is stuck in a bad situation. The three of them travel across the country to Jungleland, and as Lion starts to connect with Sky, Stanley sees a problem, and the unbreakable bond between the brothers is tested to its limits.

Writer-director Max Winkler (Ceremony) has put together a film made up of spare or used parts, covering all of the basis for a marketable gritty indie feature like he’s checking them off a list that was compiled in the ’70s. I’ll grant you, it’s a pretty good list, but it makes for a derivative film that struggles to give us anything we haven’t seen before.

Hunnam and O’Connell are both dynamic actors, and their strong chemistry carries the picture. Hunnam gets a change of pace from the roles he’s been playing in bigger Hollywood films, and while Jungleland is not one of his best pictures, it does constitute his best performance in a while. O’Connell’s character seems to mirror him perfectly, a spectacular talent who could and should be doing bigger and better things. He has bulked up for role, but he’s still a bit wiry to be entirely convincing as the boxer in the family, especially cast opposite Hunnam, whom Winkler wisely never allows to go shirtless and costumes in somewhat baggy shirts to try to keep us from wondering why he isn’t the brawler here. Still, it’s a bit puzzling that when the film was cast, Winkler didn’t just tweak the script to make Stanley a failed boxer himself. It would have been more convincing and could have actually made for a more compelling character dynamic.

Barden is a very refreshing presence, grounded and raw, and her Sky is appealing and attractive in a real-world, believable way without overselling it.

In spite of all of its manufactured elements and faux sincerity, Jungleland plays well enough, and I never felt like throwing in the towel, but I wanted to be able to pronounce it a champion. It’s far from the heavyweight contender it wants to be, but the acting keeps it going. It’s an entertaining enough effort, and the ending packs more emotional punch than I thought they’d be able to deliver, and that raised it up a few notches for me.

Jungleland has a strong enough formula to go down easily, but it’s just a shame that it ended up as such a strong example of the “making movies of other movies” cycle. It’s certainly worth a look, especially for Hunnam fans, but if you want a gritty, working-class fighter movie and you haven’t seen Warrior, I’d recommend renting that instead. It’ll be available at a cheaper price, and it packs a much stronger punch. –Patrick Gibbs