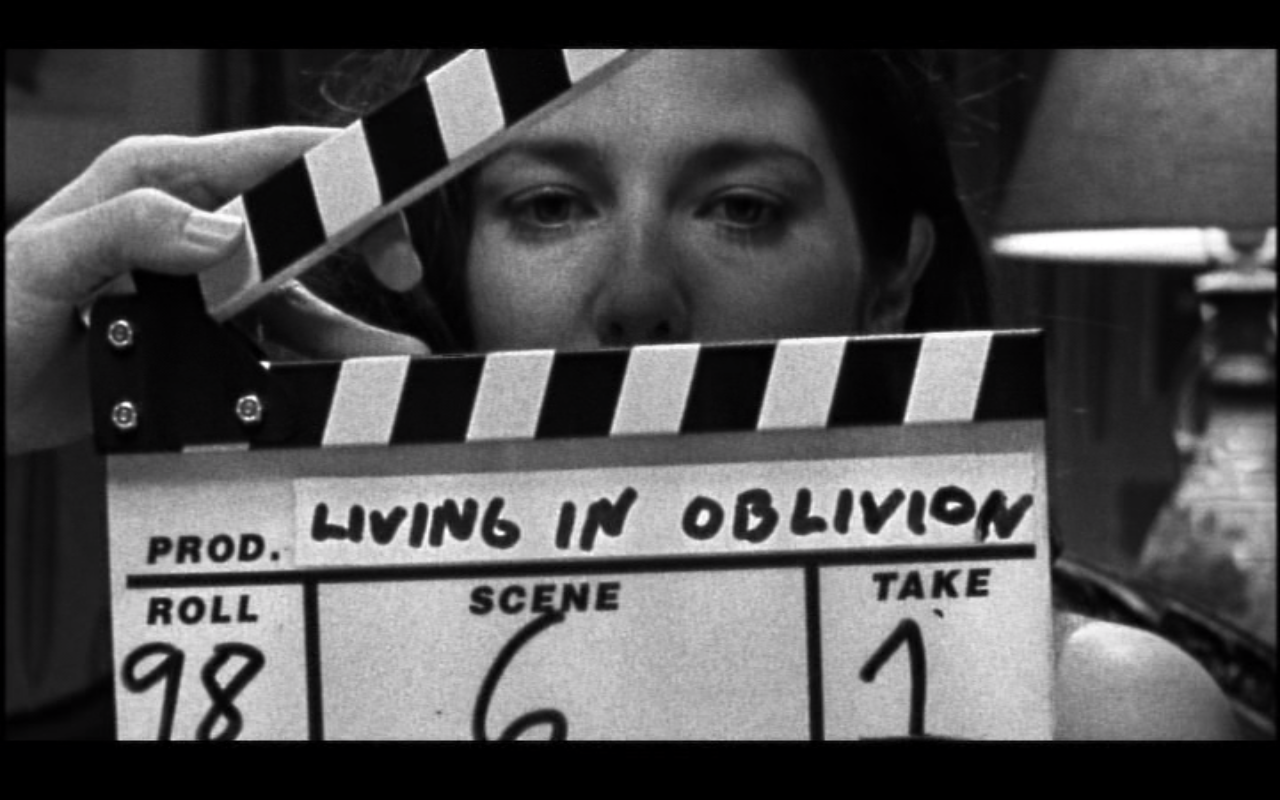 Art about art is some of my favorite shit, honestly. Plays about plays, movies about movies—the metahumor of the creative process is a goldmine, especially for anyone who’s spent any time backstage at a theater or behind a camera at a slow-moving shoot. Living in Oblivion is a 1995 comedy about an ill-fated independent film shoot, and given its cast and writing, this Blu-ray is a beautiful piece of cult cinema that you shouldn’t ignore.

The main action of the film is broken into three different acts—each bit is own unique production nightmare (literally, in the case of the first two). Director Nick Reve (Steve Buscemi) is desperately trying to keep his crew on schedule, his actors happy, and still get a good finished product. Of course, this is nearly impossible with all of the horrible mishaps that transpire. His leading lady, Nicole (Catherine Keener) isn’t confident in her acting ability, horrendous diva actor Chad Palomino (James LeGros) keeps trying to change the script to fit his image, and Tito, the dwarf hired for the dream sequence (Peter Dinklage), is rightfully irked about his odd part in the script.

Frankly, I’m surprised that we don’t have a copy of this in our cult cinema section over at the Tower, because I had an absolute blast with all of the dry humor and jabs at overblown personalities in show business. I’m hesitant to reveal much else about the movie because it’s definitely something that needs to be experienced rather than heard about. The banter is top-notch, and though some of the humor falls a bit flat 20 years after release, none of it feels particularly mean-spirited, even the bit where Buscemi tells LeGros to return the cameraman’s eye patch because it makes him look a little bit gay. Everyone’s acting is on-point. As an actor, I can tell you that acting as if you’re acting is one of the hardest things to make believable onstage or on camera, so the fact that Keener manages to pull it off so flawlessly is nothing short of a miracle.

The stylistic choices of Living in Oblivion are beautiful. The film alternates between using black and white and color for its shots, depending on the act. For one of them, the production area is monochrome, while color is used once the cameras are rolling. For the next act, this trend is reversed. Buscemi does a phenomenal job as the fanatical director, and even though this is Dinklage’s debut role, he absolutely steals the show in the third act with a killer monologue.

The Blu-Ray comes with a standard plethora of special features, but a surprisingly nice addition is the DVD version of the movie that’s also included—if for some reason you haven’t gotten a Blu-Ray player by this point.

Regardless, if you enjoyed Noises Off! and Birdman, it’s well worth your time to give Living in Oblivion your time. At the very least, you’ll come away with a better understanding of what makes a believable dream sequence. After all, have you ever had a dream with a dwarf in it?