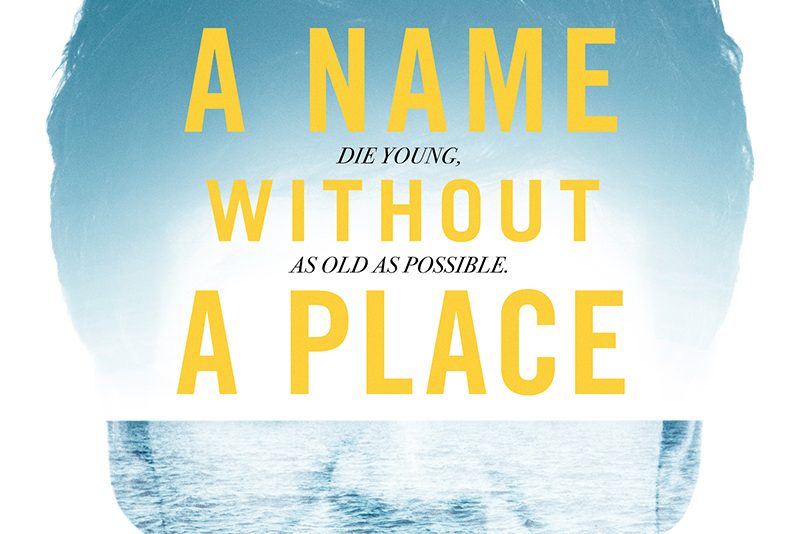 Photo courtesy of A Name Without A Place

Local Film Review: A Name Without a Place

A Name Without A Place
Director: Kenny Riches

A Name Without A Place is the kind of film that’s better in memory than actually watching it. The themes of fate, youth and absurdity come through in recollection in a way they can’t moment to moment. A young man named Gordon (Bryan Burton) travels through the Florida Keys as a way of connecting with his dead twin brother, Ivan (also played by Burton). Ivan is like Gordon in every way but somehow far less sheltered. As Gordon reads his dead brother’s journal throughout his journey through the Keys, Ivan becomes something of a shadow self for Gordon, the version of Gordon who got out of Miami Beach and discovered the world and made trouble along the way. Meanwhile Gordon, a dorky-looking and perpetual swimsuit-and-tanktop-wearing boy, lives with his much-older girlfriend, Gretchen (Elizabeth McGovern), a generationally famous actress so obsessed with her own aging that she dates Gordon in an attempt to cling to youth.

Gordon is, to say the least, going through it. There’s a sense that Gretchen admires his boyish ineptitude as much as she resents it. She encourages him to take a road trip on her dime as a means of getting him out of the penthouse, so he goes. Off in a rental smart car, Gordon follows Ivan’s journal to a turtle hospital and sanctuary. During a tour and looking at a display of items found in a dead turtle’s stomach, he snatches a small message in a bottle. In it is the phone number of Emma (Charlotte Best), whom Gordon meets and who ends up joining his trip abruptly as they are chased out of a bar and wind up crashing the car deep in the estate of the eccentric Dr. Sussicran (Patrick Fugit).

“What’s most interesting about A Name Without a Place is its particular mixture of its disparate characters—successful or not, the film is a unique flavor.

From there, it’s downhill. Emma finds Sussicran charming but never catches onto any of the loose threads of oddity Gordon quickly begins to tug on. Why is this estate so secluded? Why don’t they have running water and instead fetch it in town once a week? Why does Dr. Sussicran act like a magnate just returned from a trip to Africa but looks like he’s in his late 20s? Why are his children like that? The dramatic elements of the film fall away for comedy, but it rarely works because Gordon’s character refuses to vocalize what he’s seeing, acting irrationally in a way that feels inauthentic—not just irrational as a result of being exposed to an irrational situation. He feels like a character in a movie who won’t just say what’s happening to him in plain terms. When Emma becomes frustrated with him because of his growing concern over the underbelly of the estate (for instance, Sussicran’s kids work as servants; they’ve never been outside the estate), Gordon launches into either a baseless tirade about Sussicran’s quirks or about how he doesn’t want Emma to become a sex worker. I want to sympathize with Gordon, but he’s just kind of a goon. He misses his brother Ivan dearly, but I couldn’t find it in me to care.

About the sex-worker thing. The whole film begins with an Ashley Montagu quote: “The idea is to die young as late as possible.” We see a beautiful woman (later revealed to be Emma) through the lens of a tripod handicam, sitting on a couch. “Have you ever done this before?” a man asks. “No? But you do like it, though; don’t you? You like having sex? You like getting fucked? Does your mom know that you’re here?” It’s the “porn-actress’ first interview” trope playing out in front of us. “It says here that you’re a virgin. And how old are you? 19? Well, that’s too old to be a virgin.” It’s the first-timer fantasy, the exploitation fantasy, the “Let me take care of your virginity for you” fantasy. “So why don’t you stand up and show me your tits,” he says.

“The moments that do work are the ones in which the actors play off each other’s bewilderment of each other.”

A Name Without A Place loops back to this scene late in the movie to make a statement on fate, death and the inevitable loss of youth. For Emma, death is relinquishing her sexuality to a career of sex work. But for Gordon, sexuality doesn’t register beyond a scene of him having joyless sex with Gretchen. Death, for Gordon, is the loss of the physicality of youth. Sex is absent from his character-defining ending, and he spends a good portion of the film being upset that Emma would want to have sex for a living, much less that she’d want to do it well.

The moments that do work are the ones in which the actors play off each other’s bewilderment of each other—Sussicran’s children and Gordon get tattoos together, and they bond over their relative misunderstandings of the world. Also, Sussicran himself is anachronistic in a way that’s genuinely unsettling, and even though Emma’s fascination with him seems farcical, their relationship hits a stride toward the back half of the movie, and the notion of inevitability feels its most potent then. What’s most interesting about A Name Without a Place is its particular mixture of its disparate characters—successful or not, the film is a unique flavor.

But for me, the film was unevenly entertaining to watch as Gordon’s character slams around the plot like a kid in a bounce house. There’s no one scene I would point to that really speaks to anything beyond the opening and closing scenes, which by the film’s end, read with sexist undertones. A Name Without a Place is forgettable to me in this way, capped in my memory by its worst moments and never breaking through to stay with me. Eventually, it’s over, the bounce house deflates, and you’ve mercifully got to pull the kid out. –Parker Scott Mortensen