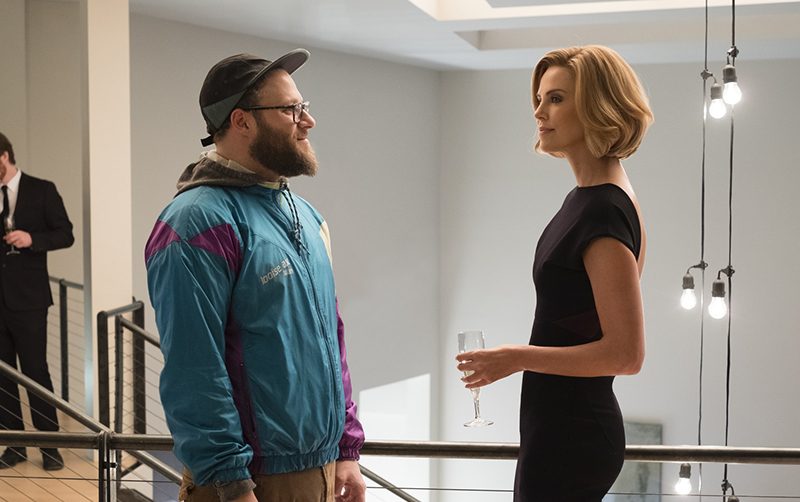 It appears that whenever Seth Rogen’s name is mentioned in the cast of an upcoming film, one could easily predict that the contents will embody numerous crude jokes and an abundance of drug humor. Such is the case with director Jonathan Levine’s latest romantic comedy, Long Shot, but the aforementioned characteristics are not the only elements driving this production.

Rogen stars as Fred Flarsky, a committed journalist with a sharp wit and whose company was recently purchased by a conservative conglomerate, thus sabotaging his career path. On the other side of town, Charlotte Field (Charlize Theron) epitomizes success in the world of politics as the youngest Secretary of State and is among the most powerful women on the planet. When the opportunity to run for President arises, Charlotte must discover the best way to please the masses, but her lack of humor has become a noticeable hurdle. In a chance encounter, our two leads cross paths and reconnect via the fact that she used babysit him and he always had a crush on her. Charlotte hires Fred as her speech writer, but, as the two stroll down memory lane and reignite their passions for their crafts, another layer of passion brings them together even closer.

As stated earlier, Long Shot does feature the archetypical drug-infused shenanigans that come along with Rogen’s presence, but Levine, adding a much-needed sense of authenticity, puts an enormous spotlight on the realities of the ways in which women in the public eye are treated differently than men. During multiple scenes, conservative news anchors are shown being overly offensive, but the sad part about the representation is that is not a far cry from the truth.

As for the chemistry between Rogen and Theron, they surprisingly work quite well with each other. It’s a breath of fresh air to see Rogen take on a more serious character, and as for Theron (when is she ever bad?), she takes advantage of the chance to showcase her comedic abilities. Long Shot is an endearing tale that will leave you with a grin. Both of them have my vote. Lastly, if you need a local reason to get to the theater, the soundtrack incorporates Utah’s own Thunderfist, as the film opens with their song “Smoke ‘Em While You Can.” Can’t go wrong with that. –Jimmy Martin