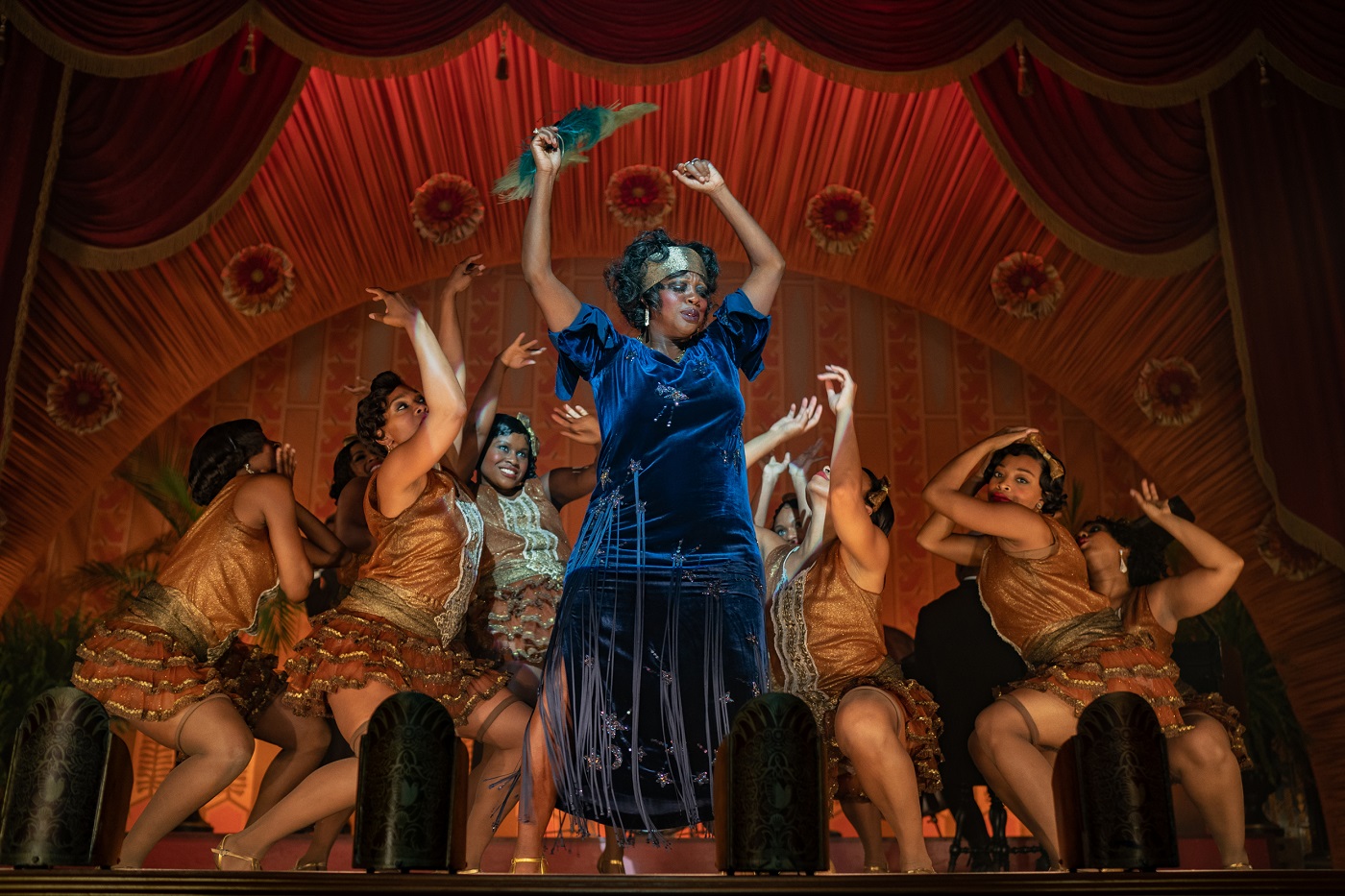 In my entirely subjective opinion, there is no music more exciting to see performed live than jazz. The energy and the level of in the moment inspiration is electrifying. The best concert I've ever attended, bar none, was the legendary saxophonist Branford Marsalis and his quartet. Through a combination of chutzpah and sheer dumb luck, I found myself backstage afterwards hanging with Marsalis and the band, talking music and having the time of my life.

I couldn't help but be reminded of this experience as I watched Ma Rainey's Black Bottom, the spellbinding new adaptation of August Wilson's great play.

In a claustrophobic rehearsal room in 1920s Chicago, a group of Black musicians shoot the bull as they wait for the arrival of "Mother of the Blues," Ma Rainey (Viola Davis). The ambitious trumpeter Levee (the late Chadwick Boseman)—who has an eye for Ma's girlfriend and is determined to stake his own claim on the music industry—spurs his fellow musicians into an eruption of stories, truths and lies, their banter ranging from lighthearted to triggering. The latter is especially true for Levee, who is repressing a great deal of past trauma and has grand ambitions to make it big. When Ma finally arrives for the session, much of the day is spent on a battle of wills between Ma and her white manager and producer over control of her music, while Levee tries to sow the seeds for a record deal of his own. Tempers flare, egos collide and lives are changed forever.

The big story that everyone is talking about here is, of course, Boseman, the Warrior King of Wakanda himself, in his final role, and it's a poignant, powerful and truly heartbreaking exit for an actor whose reign as a bona-fide superstar was just beginning. I will never forget going to see 42 simply because Harrison Ford was in it and leaving thinking only about the dynamic young lead actor who blew him off the screen. But there's nary a trace of Jackie Robinson or T'Challa here, either in the character or in his physicality. While I do not wish to dwell on anything morbid or downbeat, Boseman is downright skinny here—almost alarmingly so in comparison to his past roles—and it's not too hard to see the signs of illness, at least in hindsight. Nevertheless, he brings an energy that the most imposing presence could never match, and it's yet another performance that will shine on forever.

August Wilson was a master at creating men who weren't easy to like but were impossible to just dismiss, and there's plenty of reason to root for this talented young musician in his quest to realize his own grand dreams. Though they don't think too much of each other, Levee and Ma have a lot in common, forced to be scrappers who are constantly ready for a fight. Boseman's performance channels and matches the power of a young Denzel Washington, who served as the film's producer, and the late actor would be getting serious Oscar talk even under the best of circumstances.

Viola Davis is my personal favorite actress, and Ma is probably the least endearing character I've ever seen her play, but that doesn't mean she's unsympathetic. She adopts a gruff, prima-donna attitude because it's a necessary survival tool. She's a Black woman in an industry run by white men, and she cannot afford to show any weakness. She certainly earns respect, if not always love. The entire ensemble surrounding her is marvelous, but Glynn Turman (A Different World, Buffalo Soldiers, Super 8) is a standout as Toledo, the band's pianist.

George C. Wolfe (The Immortal Life of Henrietta Lacks) directs with an assured and inspired touch, keeping true to the spirit of the fact that Ma Rainey's Black Bottom is meant for the stage while still opening it up with some striking cinematic elements, including a new and unforgettable ending that hits so hard it nearly knocked me over. The emotion of this film hit me on so many levels, with Levee's dream of making his own music with his own band being very easy for me to relate to as a lifelong aspiring filmmaker who has faced plenty of obstacles and setbacks and has had to fight to be taken seriously. But what hit me hardest was the knowledge that as a white male, there's a whole other level of the fight that I can't begin to relate to because I'll never have to do so.

All of this was running through my mind and heart as the credits rolled, and then the words "music by Branford Marsalis" came up on screen. I’d had no idea he was involved in the film, despite the fact that I’d been thinking of him the whole time, and it was the cherry on top of one of the sweetest and most fulfilling experiences I’ve had watching movies and writing about them all year long. And then I cried at the realization that it was the last new performance I’d ever seen from Chadwick Boseman. Much like the very best music, Ma Rainey’s Black Bottom was, for me, a whirlwind of emotions. –Patrick Gibbs