Movie reviews for Fifty Shades Of Grey, It Follows, Kingsman: The Secret Service, Super Sentai Zyuranger and What We Do In The Shadows. 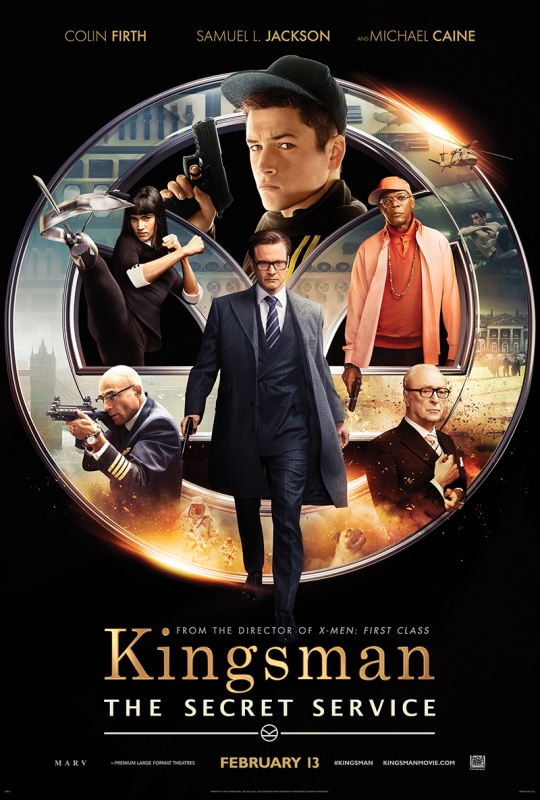 Fifty Shades of Grey
Focus Features
Director: Sam Taylor-Johnson
In Theaters: 02.13
Before we begin, I need to make it known that I was made aware of this franchise’s existence by the fact that my grandmother and mother read the novel, so I had a negative association with it from the beginning. With that said, Sam Taylor-Johnson’s attempt to film the predatory tale of a hunky stalker with sexual abuse in his childhood is far too disturbing with or without an upsetting family introduction. The story follows Anastasia Steele (Dakota Johnson) as she meets billionaire bachelor Christian Grey (Jamie Dornan) while interviewing him for her college’s newspaper. Grey is instantly attracted to Steele and promptly becomes unrelenting in his quest to make the virgin a part of his deviant sex acts. Why people find this alluring is beyond me. Forget the fact that author E.L. James started this nonsense as Twilight fan fiction—the chemistry between Johnson and Dornan is non-existent. The constant bombardment of Grey’s enticements toward Steele with laptop computers, fancy cars and helicopter rides in order for her to sign a contract so he can act upon his desires to punish is disgusting and degrading. Sure, there are a few sensual scenes that stimulate the nether regions, but the cliffhanger ending, which I could not care less about, leaves the audi- ence feeling anything but romantic. For the greater good of the human race and the world of cinema as a whole, avoid this movie like a bad case of gonorrhea. –Jimmy Martin

It Follows
Radius
Director: David Robert Mitchell
In Theaters: 03.20
David Robert Mitchell’s It Follows cannily takes the torrential world of the contemporary American teenager and uses it to bring the horror film back to its visceral roots—those dirty, little tendrils that obscure the collective fears of our modern society. Today’s teenagers live in a bigger, more accessible world—a world in which the idea of the masked boogeyman lurking in the backseat has become clichéd to the point of being used as a Geico commercial. This is a truth that Mitchell understands completely, and his dissection of the paranoia and emotional detachment that plagues our suburbs is the genesis of this fresh interpretation of the horror genre. Following a sexual encounter with an older man, Jay (Maika Monroe) finds that she is being followed by a malevolent entity that will only leave her alone if she sleeps with someone else. This terrifying scenario throws Jay and her friends into a nightmarish game of trying to keep one step ahead of the relentless creature. Cinematographer Michael Gioulakis captures the unyielding dread that permeates the narrative with wide shots that evoke the eerie perspective of a hunter stalking its prey. It Follows feels like a natural progression of the teenage horror film—one that uses the complexity of today’s young people as a canvas for some expertly crafted, psychosexual drama. –Alex Springer

Kingsman: The Secret Service
Focus Features
Director: Matthew Vaughn
In Theaters: 02.13
It has been a long time since I watched a film and immediately wanted to get back in line to ride it again like a rollercoaster, but that is exactly what Matthew Vaughn’s latest homage to the gentleman spy genre did to me. Eggsy (Taron Egerton) is a young man who was meant for great things, but certain unforeseen circumstances changed that path of righteousness to a life of mischief and crime. After finding himself in serious trouble with the law, an acquaintance of Eggsy’s deceased father, Harry Hart (Colin Firth), offers the troublemaker a life-altering opportunity to become a member of the Kingsman, a secret spy agency that an- swers to no government. Complete with gadgets and gizmos that would make James Bond drool, Vaughn reignites the classy take on good vs. evil with dapper suits, classical scores and a psychopath villain played wonderfully by Samuel L. Jackson with a lisp. The dialogue is as clever as it is funny, the soundtrack is unforgettable and there is a whimsically chaotic bloodbath scene in a church that embodies some of the most stunning choreography I have seen to date. The icing on the cake comes from an intelligently written female spy prospect, Roxy (Sophie Cookson), who abolishes the stereotypical Hollywood female role, which is much needed in modern-day films. My fingers are painfully crossed in the hopes the masses discover this slice of perfection, so audiences can enjoy more adult-themed projects with comic book origins. Without a doubt, this is 100-percent badass. –Jimmy Martin