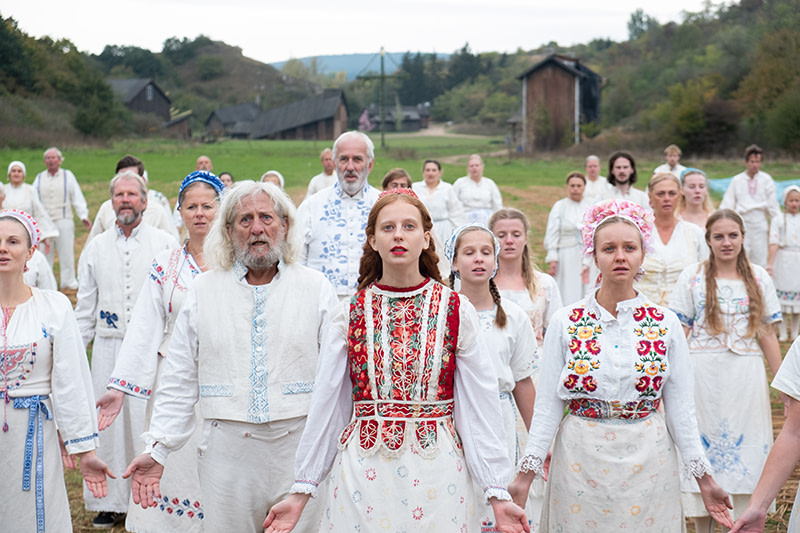 Photo by Csaba Aknay, Courtesy of A24

Midsommar director Ari Aster is the mind behind 2011 short film The Strange Thing About The Johnsons and last year’s talk-of-the-town, Hereditary. He has established himself as a director that delivers striking visuals as well as writes captivating stories that twist hearts just as much as they wrench guts. Midsommar, his second full-length feature film, delivers exactly that with a deranged elegance.

Midsommar begins with a focus on Dani (Florence Pugh) and her less-than-adoring partner, Christian (Jack Reynor). We see that their long-term relationship is on the rocks, and Dani is dealing with a family-related tragedy on top of it. Christian’s friends Mark (Will Poulter), Josh (William Jackson Harper) and Pelle (Vilhelm Blomgren) are planning a trip to Sweden for the summer, to visit Pelle’s family for their Midsommar celebrations. However, once they arrive, they quickly learn that this wasn’t the retreat they were expecting. It isn’t long until the group realizes that Pelle is a part of a pagan cult, this celebration only occurs once every 90 years, and that they will experience excruciatingly gruesome encounters throughout their stay. These encounters consist of many graphic rituals that are enveloped in a disorienting atmosphere, making me feel just as out-of-place as Dani did. Throughout the story, there’s a divide that grows between the group of friends, separating them as they are individually plucked from the group leading to a satisfying and fulfilling conclusion.

“The score and soundtrack for Midsommar is enchanting and it supports the story effortlessly.”

Midsommar, in comparison to Aster’s last project, Hereditary, takes on a completely different tone while still following through with extreme visuals. While Hereditary is known for its dark, intense storyline and it’s looming, stick-to-your-ribs cinematography, Midsommar kicks it up a notch by keeping the light on. The brightness of this film creates the feeling like there’s nowhere to escape as every sickening, gore-filled moment is showcased in broad daylight. The cinematography in this film is absolutely breathtaking, and the visual effects used throughout is never “too much.” There’s purpose and intention behind every shot, every cut and every haunting image. I could talk about how beautiful this movie is forever because the lush, green environment and all of the colorful flowers are sweet on the eyes, and the way they are captured is careful and do it every bit of justice. The way the richness of red blood jumps from the ethereal pastel color schemes makes it all that more gruesome. I was expecting more blood, as barbaric as that may seem, but the film’s other terrifying offerings scratched that itch, leaving nothing to be desired on that front.

The score and soundtrack for Midsommar is enchanting and it supports the story effortlessly—so much so that it’s almost hypnotizing when paired with each shot. I would listen to it independently from the film because it is so beautiful and refreshing as it is straying from the usual dark, ambient, horror-score path.  Bobby Krilic (The Haxan Cloak) uses traditional Nordic instruments and non-lyrical, chant-like vocals together to create a dreadfully spellbinding soundscape that hugs the story tight. By using these mediums together, there aren’t traditional jump-scare-packed, violinning shrill sounds from other popular horrors and gifted with a bright, airy soundtrack that still manages to sit heavily on the ears of the viewer.

“No matter what it is on paper, Midsommar is a beautifully unsettling watch.”

This film and Aster truly are gems in the realm of intense, shocking filmmaking. While Midsommar could be considered “horror,” I believe that “horror” doesn’t quite cover all of this film’s bases. There are so many complexities to this film that it can’t be completely pinned down to one thing. Is it a thriller, drama, horror or all three? No matter what it is on paper, Midsommar is a beautifully unsettling watch, and while it may clock in at 140 minutes, its captivating nature makes the time fly. I absolutely love this film and am so excited to see what else Aster has up his sleeve. –Zaina Abujebarah