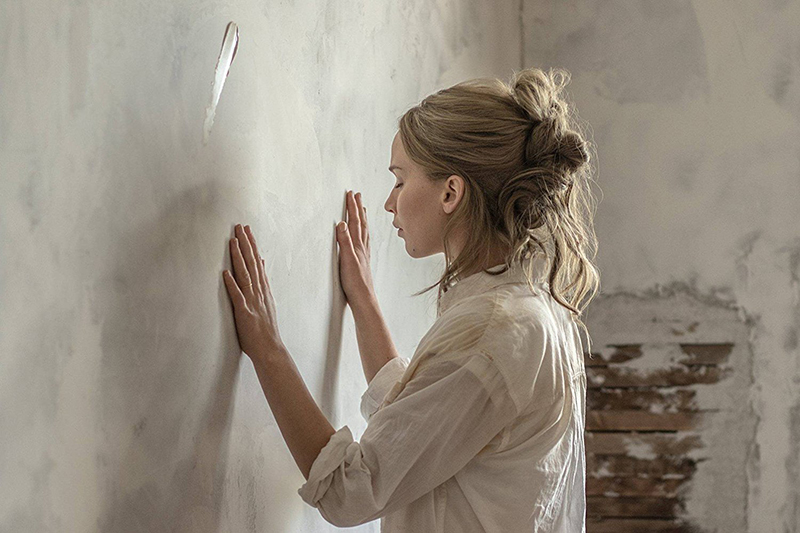 In mother!, Darren Aronofsky combines the many obsessions of his psyche into one long, horror-tinged jaunt that begins in psychological thriller and ends in phantasmagoric, swallowed-by-fire apocalypse. The film takes place entirely within an old, remote mansion. Inside lives a woman, billed in the credits as “Mother” (Jennifer Lawrence), and her older husband (Javier Bardem, billed as “Him”), a famous poet who is struggling to overcome his writer’s block to produce his next work. The poet’s home was once almost entirely destroyed in a fire, but he and Mother return to restore the house and lead their life together. As the poet mulls away in his upstairs studio, Mother lovingly paints the walls and attends to the home’s fixings. She taps into the countryside structure’s beating, bleeding heart, working to create a “paradise”—an Eden—for herself, the poet and his work.

The Biblical imagery only continues from here with the arrival of a stranger, “Man” (Ed Harris), a dying doctor and huge fan of the poet’s work. Mother is immediately distrusting, growing frustrated and baffled when the poet insists that the doctor stay the night. The next day, the doctor’s shrewd and seductive wife, “Woman” (Michelle Pfeiffer), arrives, and she’s all the more invasive, playing Eve and the serpent as she drunkenly wanders through the mansion and probes into why the other couple doesn’t have any children yet. By the time the intruding couple’s two adult sons (Brian and Domhnall Gleeson) arrive, embroiled in the furor of a Cain and Abel brawl, Lawrence’s character escalates all the more into her paranoia and terror.

In nearly every shot, the camera follows Lawrence closely, tightly hugging her face while every single sound in the house, from creaking floorboards to dripping water (or blood), is amplified. The film is technically impeccable, with frames that impart Mother’s claustrophobia and delirium, cascading from the serene, country-home beginnings and plunging into depravity and annihilation. There are stunning performances all around, too—Lawrence does well here as she pulls the audience into the dazzling and dizzying throes of the Lars von Trierian psychological horror.

Despite the more literal aspects of its storyline and the parallels to Polanski’s Rosemary’s Baby, mother! isn’t entirely centered on Mother’s pregnancy. Rather, it’s about creation and destruction—birth, death, rebirth. There are certainly the more mythological or theological angles, like the Garden of Eden or the unseen feminine counterpart to God’s more overt masculine side, and the film could certainly be considered from Mother Earth’s viewpoint, what with the man—and those he invites in—stealing, ravaging, consuming and destroying Mother and her home. (When mother! screened at the Toronto International Film Festival, audience members were given copies of Rebecca Solnit’s “Mother’s Prayer,” in which the author/activist replaces “Our Father who art in heaven” with “our mother who art underfoot,” and so on.)

It’s difficult, however, to shake the sense that mother! actually operates on a smaller, more personal scope: less grand, ecofeminist allegory and more the-artist-and-his-muse dynamics. Bardem’s affable but greedy poet does anything he can to feed his ego and foster new creative stimuli, from taking early-morning walks to inviting strangers into his home, ignoring however much anguish or agony he causes his wife. He alternates between calling Mother (and diminishing her to) his “inspiration” and his “goddess” throughout, yet no matter how much Mother shares, grinds and toils, she can never give enough.

The gendered and uneven push-and-pull between the poet and wife’s mismatched needs/desires culminates into the last several, blink-or-breathe-and-you’ll-miss-a-detail minutes of the film: primal mania, gleeful abandon, gruesome consequences. There are easy connections to make between mother!’s poet and Aronofsky himself, what with the director’s tendency to tell tormented stories (Pi’s obsession, Requiem for a Dream’s addiction, Black Swan’s self-immolation) and push actors to their limits (while shooting one particularly emotional scene for mother!, Lawrence started hyperventilating and tore her diaphragm). But from that lens of self-critique, mother! comes off as less self-aware, more self-aggrandizing. Aronofsky crosses lines here, especially considering that the film is being distributed by Paramount, and does well to create so visceral a film, giving rise to divisive—yet eager—interpretations. But he also trades in any sense of subtle writing or character nuance, indulging so much in feverish, overwrought display that mother! feels almost shallow here. –Kathy Rong Zhou