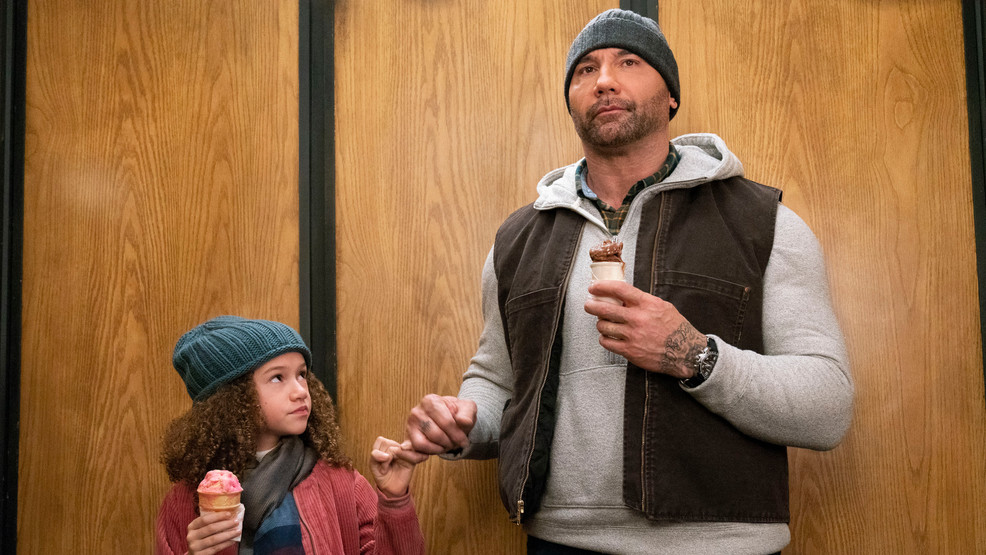 In March, back when new movies were opening in theaters and there were press screenings every week, I missed the first screening of My Spy and figured I would make it to the second one, which was canceled at the last minute so that we could all feel like we were instead living through an R.E.M. song. Three months later, what was once a major theatrical release has premiered on Amazon Prime. There’s a level on which My Spy benefits from this: In March, it was just a warm up act that got weak reviews, but in late June, it’s the closest thing to a blockbuster we are getting, and it’s a lot better than Artemis Fowl.

JJ (Dave Bautista) is a former Special Forces soldier who recently joined the CIA, but his brash approach causes him to blow his first major mission. As a result, he is stuck with a surveillance assignment and teamed with tech wiz Bobbi (Kristin Schaal). Their mission is to keep an eye on the sister in-law of Victor Marquez, a French illegal arms dealer who has obtained construction plans for a miniaturized nuclear bomb, which he intends to sell to terrorists. The agency suspects that the plans may be in the possession of Victor’s late brother, David’s, American wife Kate (Parisa Fitz-Henley), who left France with their 9-year old daughter, Sophie (Chloe Coleman), and went back to Wicker Park in Chicago.

To accomplish this, JJ and Bobbi set up surveillance in the building where Kate and Sophie live. But when Sophie finds one of their hidden cameras, she stumbles upon their base of operations. Sophie then blackmails JJ into keeping her company while she tries to make new friends, and JJ forms a reluctant bond with the girl.

My Spy is a cookie cutter movie made from more or less the same dough as Kindergarten Cop or The Game Plan, but for the most part, it’s quite edible. Bautista is really coming along as an actor, as we saw in Blade Runner 2049, and he can carry a movie. But it’s Coleman who makes the movie, without question, and her performance takes a character that should seem phony and makes her human and lovable. Schaal (whom you may know from Flight of the Conchords, and will almost certainly recognize as the voice of Louise on Bob’s Burgers) is a personal favorite, and she adds a lot to the film, also taking what could have been a generic character and making her memorable.

Director Peter Segal (Get Smart) has a pretty good handle on the film over all, though he makes on add choice in overusing a Cardi B song that is catchy, but hardly appropriate for a family film. In general, the script gets more reckless with the profanities than it should—given the target audience—and the nasty, violent villain clashes a bit with the overall tone. Still, the movie exceeded my relatively low expectations, and because it’s on streaming and largely bereft of major competition at the moment, it’s likely one I will enjoy watching more than once. It’s hardly classic, but it gets the job done. My Spy gets a qualified recommendation from me. –Patrick Gibbs