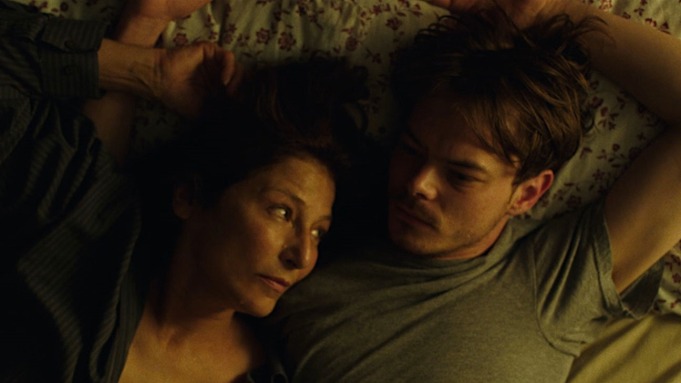 Drug addiction is a heavy and powerful subject in any context, with no difference when it comes to film. Unlike almost all other art forms, movies can show us a different life in motion. No Future, directed by Andrew Irvine and Mark Smoot, instead shows us two lives in stagnation following the drug-related death of a mutual loved one.

In the film, Will (Charlie Heaton), a young man recovering from addiction, loses an old friend to the substance he’s managing to leave behind. This loss leads him to reconnect with his friend’s mother, Claire (Catherine Keener), while driving a wedge even further between him and his girlfriend, Becca (Rosa Salazar). Will and Claire find comfort in their relationship—as well as confusion—as they move through an aftermath filled with guilt and regret.

Though its premise suggests a deeply emotional and resonant experience, No Future never quite delivers. Shot well with a somber haze in its framing, coloring and camera movement, the film successfully creates a sense of hopelessness, realism and slowness. The grief and mourning felt by the two leads is well near tangible.

That being said, the film’s slow sense of sadness—while effective—backfires when it succeeds a little too well. A large chunk of No Future is spent feeling caught in a cycle of repetitive beats. Every scene between Will and his girlfriend plays out the same way, with him refusing to communicate and her leaving him … only for them to repeat that conversation again and again throughout. Will’s visits to Claire play out similarly, albeit with a different conflict between them.

The performances from Heaton and Keener are the highlight and carry a script that could otherwise feel bland and alienating. Heaton’s mannerisms and line deliveries feel true and never out of place or over-dramatic. Keener portrays Claire with that same sense of realism and groundedness, though occasionally it feels a little stiff.

It’s easy to understand that the understated haze of No Future was intentional. We’re meant to feel trapped in a bleak, grey world of sorrow and frustration because that’s what our characters feel, but it doesn’t make for an impactful viewing experience. The narrative and its characters’ decisions weigh on the viewer, but it doesn’t always translate to a connection with the material. No Future is competent and deliberate in its choices, but those choices left me numb and unsatisfied.

There is always room for a harsh story that leaves you heavy. I only wish this one were executed with more emotional movement and less repetition. –Max Bennion