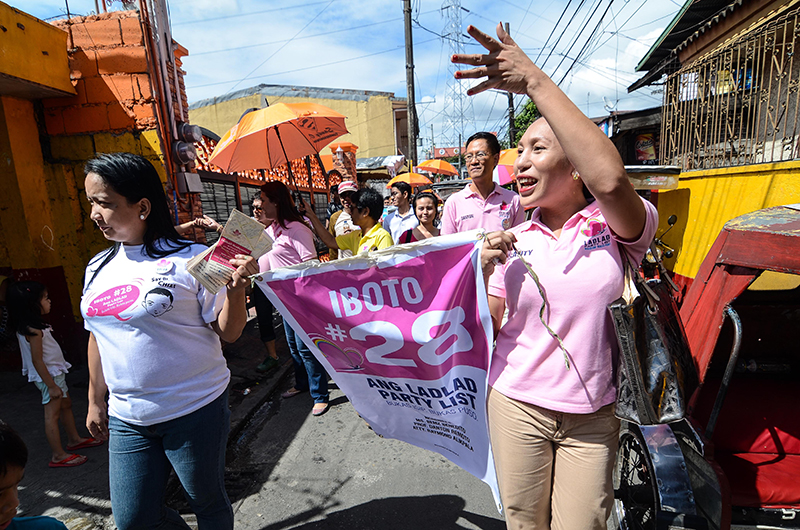 In the wake of North Carolina’s “bathroom bill” and Utah’s history-making nomination of Democrat Misty K. Snow as Senate nominee, Out Run is one of the timeliest documentaries being shown at this year’s Damn These Heels Film Festival. Set in the Philippines, this political doc follows the Ladlad Party—the only LGBT political party in the world—and its monumental, grassroots effort to obtain a seat in the Philippine Congress. The face of the Ladlad party, Bemz Benedito, is a passionate activist and transgender woman—the sweetheart of LGBT Filipinos.

In the observational documentary, the Ladlad Party—which overwhelmingly represents the poor LGBT communities of the Philippines—enthusiastically makes its way to hair salons, beauty pageants and awareness marches, led by Ladlad nominees and campaign coordinators such as the immensely likable Santy Layno and Bhuta Adelante. Directors S. Leo Chiang and Johnny Symons’ deft observational storytelling offer viewers glimpses into the lives of their primary characters: the working-class tenements, trans women’s explanations of their gender identities, the grandiose beauty pageants that are safe havens for so many, the news coverage after a transgender woman was beaten to death for using a women’s restroom.

In the face of institutionalized poverty, daily discrimination and a predominantly Catholic nation, Ladlad’s is a daunting task. Despite the seemingly increased visibility of transgender and gender non-conforming individuals in the Philippines, the Philippines has yet to have a Gender Recognition Law—Benedito, for example, still has to carry identification that lists her gender as “male.” Unlike the U.S. gay rights movement’s push for same-sex marriage, Ladlad’s primary platform is passage of an anti-discrimination bill to guarantee equal rights for LGBTs in employment and housing. There’s also Ladlad’s somewhat political rival, the anti-LGBT preacher and politician Benny Abante, whose title for his group of LGBT supporters, when shortened to an acronym, reads “AIDS.”

Most notably, Out Run astutely captures the ins and outs of running a campaign and a political party. There’s the tireless grassroots mobilization and activism, Benedito’s grace and careful optimism as a nominee, and the enthusiastic parades and rallies in support of Ladlad and LGBT rights. However, Out Run also unblinkingly captures the compromises and controversies surrounding the political party. While the Ladlad nominees view their political alliances and concessions as necessary strategies to win a seat in Congress, many of their potential constituents disagree. Some LGBT Filipinos felt that instead of a transgender woman, a more “straight-acting,” cisgender gay man would have made for a more unifying primary nominee, while others decried Ladlad’s decision to not advocate for same-sex marriage in their platform, viewing it as a sign that the party was already making compromises. In a few short scenes, a journalist from The Guardian questions the Ladlad nominees about their decision to create several alliances with local government heads and officials, implying that Ladlad was forming too many pacts early on.

Each detail in Out Run is integral to capturing the immense responsibility taken on by the world’s only LGBT political party in their fight to make the concept of LGBTQ equality a reality in the Philippines. By following the narrative of Ladlad, as well as the moving and relatable stories of the diverse individuals who make up the party, Out Run illuminates the complexities of LGBTQ lives and identities and how they interact with political movements, cultural norms and global progress toward—or away from—LGBTQ equality. –Kathy Zhou