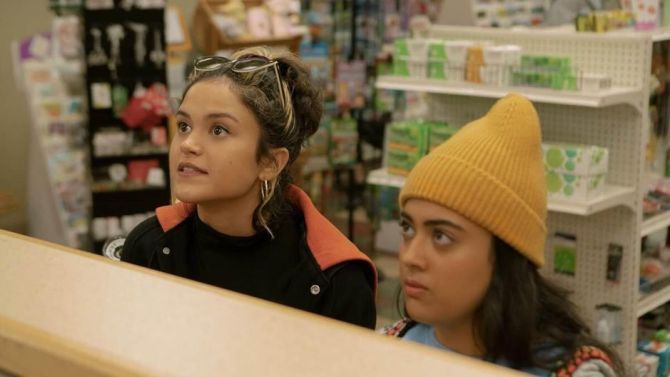 As a general rule, raunchy teen comedy is not my genre, and never has been. But occasionally, one is able to rise above the tropes, the contrived amenities and immature antics and wins me over. Such is the case with Plan B, the new film from actor-turned-director Natalie Morales (Parks and Recreation, Dead To Me), which takes a comedic yet surprisingly sensitive approach to the subject of reproductive health care.

Plan B follows BFF’s Sunny (Kuhoo Verma, The Big Sick) and Lupe (Victoria Moroles, Liv and Maddie, Teen Wolf), both of whom are crushing hard. The inexperienced and terminally uncool Sunny is completely enamored with a boy from school named Hunter (Michael Provost, Insatiable, Saving Zoë), while Lupe, known for her legendary sexploits, is habitually texting a charmer named Logan whom she met online. When Sunny’s mother goes away for the weekend, Lupe decides that the way to get Sunny and Hunter together is to throw a rager at Sunny’s house.

The girls spend the evening mixing drinks, and when the party starts, Sunny gets drunk and ends up having an unplanned sexual encounter. When she discovers that there was a mishap with the birth control, Sunny has a meltdown, but Lupe suggests that they get her a morning after. or “Plan B.” pill. But when they go to what is apparently the only pharmacy in their small South Dakota town, the condescending pharmacist (Jay Chandreskhar, Super Troopers, Club Dredd) refuses to sell them the pill, citing a “conscience clause” law that allows him to make that decision. This leaves the girls with 24 hours to track down a pill, so they hit the road, embarking on a series of misadventures and learning a lot about themselves along the way.

Plan B is bawdy and R-Rated, and to say that it’s not for the easily offended is putting it quite mildly. The film relies a bit too heavily on shock-value humor—to varying degrees of effectiveness, for my taste—especially in the first half. But there’s also a number of genuine laughs, most of which can be directly attributed to the brilliant breakout performances of Verma and Moroles, who have a chemistry and sense of timing in their interplay that’s really quite something. The screenplay by Prathi Srinivasan and Joshua Levy (iZombie, Bollyweird) is well-constructed, hiding genuine depth beneath the endless onslaught of penis and vagina jokes, and director Morales pulls it all together through her sensitive and nonjudgmental approach to not just Sunny and Lupe, but all of the major characters.

Plan B is, in many ways, at its best when it lets its comedic guard down and allows the more tender character moments play out. Once it reaches a point where it starts to trust its stars to guide it, it really shines. There are some great surprises along the way, and the relationship between the two friends is always believable and, at times, quite touching. While it’s a very different movie from last year’s groundbreaking classic, Never Rarely Sometimes Always, it brings that film to mind in that both are providing a glimpse at real issues that many young women face.

While I’m confident that the Keith Merrills of the world will judge this film without actually seeing it, Plan B effectively portrays the short-sighted self-righteousness of those who think they have the right to make decisions for such women without taking any responsibility for their repercussions. The movie couldn’t be called “anti-male” by any means, and it ultimately offers compassion and sympathy for what the boy in the story is going through as well.

I can’t blame anyone if Plan B is a bit too much for their taste. If I’m being totally honest, I almost gave up on it at one particularly graphic moment involving an unpleasant body piercing, but I’m glad I stayed with it. The character relationships, the talented cast and the overall message of the importance of teens and their parents being able to communicate honestly—especially about delicate subjects—all make a memorable film and an impressive feature debut for its stars and their director. –Patrick Gibbs