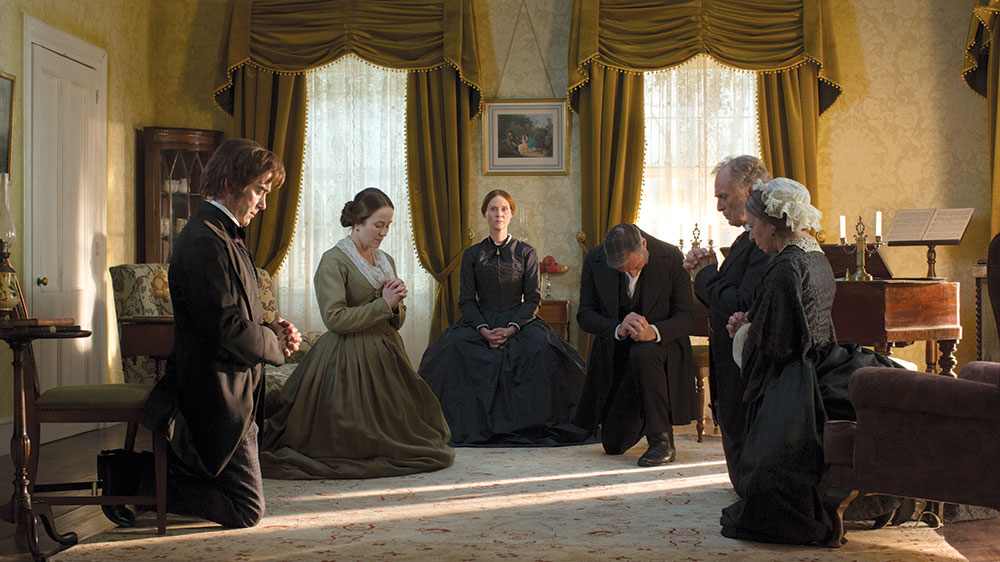 Learning the story behind an enigmatic literary icon like Emily Dickinson is a dangerous endeavor. Part of me wants to know what everyday life was like for a writer like Dickinson, whose ability to enunciate the natural and spiritual world with such singular language was nothing short of genius, but then part of me likes to think of her as an incomprehensible enigma. For those whose appreciation of an artist is strengthened by learning about their humanity, go see A Quiet Passion this instant. For those who prefer to maintain the mystery, proceed with caution.

From A Quiet Passion’s very first scene, both the successes and flaws of Davies’ film are starkly present. After a particularly fiery speech from the headmistress of Amherst Academy forces the young women present into two camps—those who have found God and those who pledge to find Him—a young Dickinson (Emma Bell) stands defiantly in the middle. The production design, costumes and dialogue present Davies’ penchant for creating textbook-level period dramas. However, the decision to kick off a film with such an obvious illustration of Dickinson’s rebellious attitude was a bit heavy-handed, which felt out of place with the poet’s knack for subtlety. While A Quiet Passion is lovely to look at, it does struggle a bit with striking the right tone for the subject of its study.

Cynthia Nixon, who assumes the role of Dickinson in her later years, is the heart and soul of the film. She finds the tumultuous conflict between Dickinson and the hyper-patriarchal society in which she lives and communicates that conflict with just the right amount of restraint. While Nixon’s performance is amazing, the film gets a lot of mileage out of genre mainstay Jennifer Ehle, who gives every scene she’s in some much-appreciated brightness—Dickinson’s story isn’t the most upbeat of tales, and Ehle’s presence helps add a bit of levity to the film.

Outside of the well-crafted performances and striking visuals, A Quiet Passion struggles a bit with its overall narrative. Since Dickinson herself wouldn’t give two shits about what today’s audiences would think of her, the film doesn’t spend much effort on creating a commonality between her and the audience. While this is a badass move on the part of Davies, it’s also a move that hampers our ability to identify with the main character. –Alex Springer