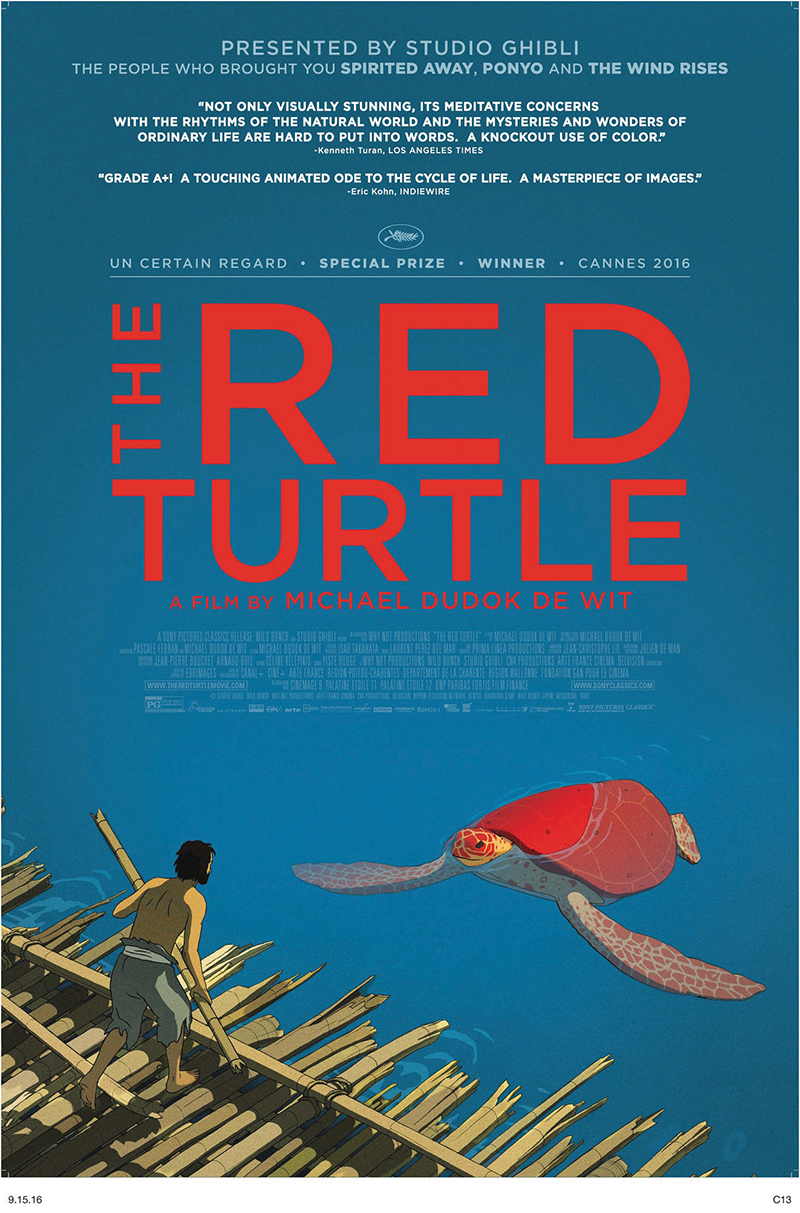 The Red Turtle is the latest outing from Japan’s geek-revered animation wonderland Studio Ghibli, and it will no doubt be something that fans of Ghibli’s other films will enjoy. Its truly gorgeous animation palette transports the viewer directly into the quiet nuances of the film’s story, and its dialogue-free narrative structure lets the audience drink freely from that deep well of visual beauty. Those who are in need of hyperactivity in their animated features, on the other hand, may want to skip it. Never have I seen a film with so much happening amid a story where very little actually happens.

Beginning with a lone survivor tossed back and forth within a roiling oceanic storm, The Red Turtle makes no pretense of explanation. We don’t know who this man is, nor do we know why he’s stuck in the middle of the ocean. What we do know is that he eventually washes up on a tropical island, filled with lush green bamboo forests, chittering birds and mischievous crabs. Eventually, the man builds a raft to try to escape the island, but each attempt is thwarted by a giant red turtle lurking just offshore. When the turtle shuffles its way onto the beach, the man reacts violently, thus kicking off the more allegorical portion of the film, where he meets a mysterious, red-haired woman and starts a family.

At this point of the film, it’s a welcome change—we spend the first third of the film following this guy around as a giant seafaring turtle trolls him on multiple occasions. While this meditative pacing serves to familiarize the audience with the film’s verdant animation and sound effects—not to mention Laurent Perez Del Mar’s atmospheric score—it does sacrifice a bit of forward momentum.

As The Red Turtle digs into its second half, the metaphorical nature of the film starts to come into focus. It definitely gives the audience more to hold onto—it became shamefully obvious that I didn’t really care about this guy until he started his little island family. While this shift in direction definitely capitalizes on the emotional investment that the audience now feels, it also succumbs to the danger of being slightly too obvious with its metaphors despite the ambiguous subtext.

Films that deal in ambiguity have a tough job—they have to capture the audience’s attention but also give them permission to draw their own conclusions. The Red Turtle is big on the latter, as it would be easy to argue any number of possible explanations to what this island represents. The problem is that the film doesn’t spend enough time ensuring that the audience will want to have those discussions after the credits roll.

In the end, The Red Turtle left me strangely alienated—the parallels to life and death are universally applicable, but I kept looking for a humanizing access point into the lives of these characters. It’s evident that their lack of distinguishing characteristics is supposed to make it easier for us to superimpose ourselves into the film, but that aspect made it ironically hard to relate to the main characters—it’s hard to care too much about a truly blank slate.

Despite its narrative flaws, there’s a reason that The Red Turtle has been nominated for an Academy Award. Its sweeping landscapes, vibrant art design and pitch-perfect score exemplify the appeal of animated films. It’s definitely another jewel in the Studio Ghibli crown. –Alex Springer