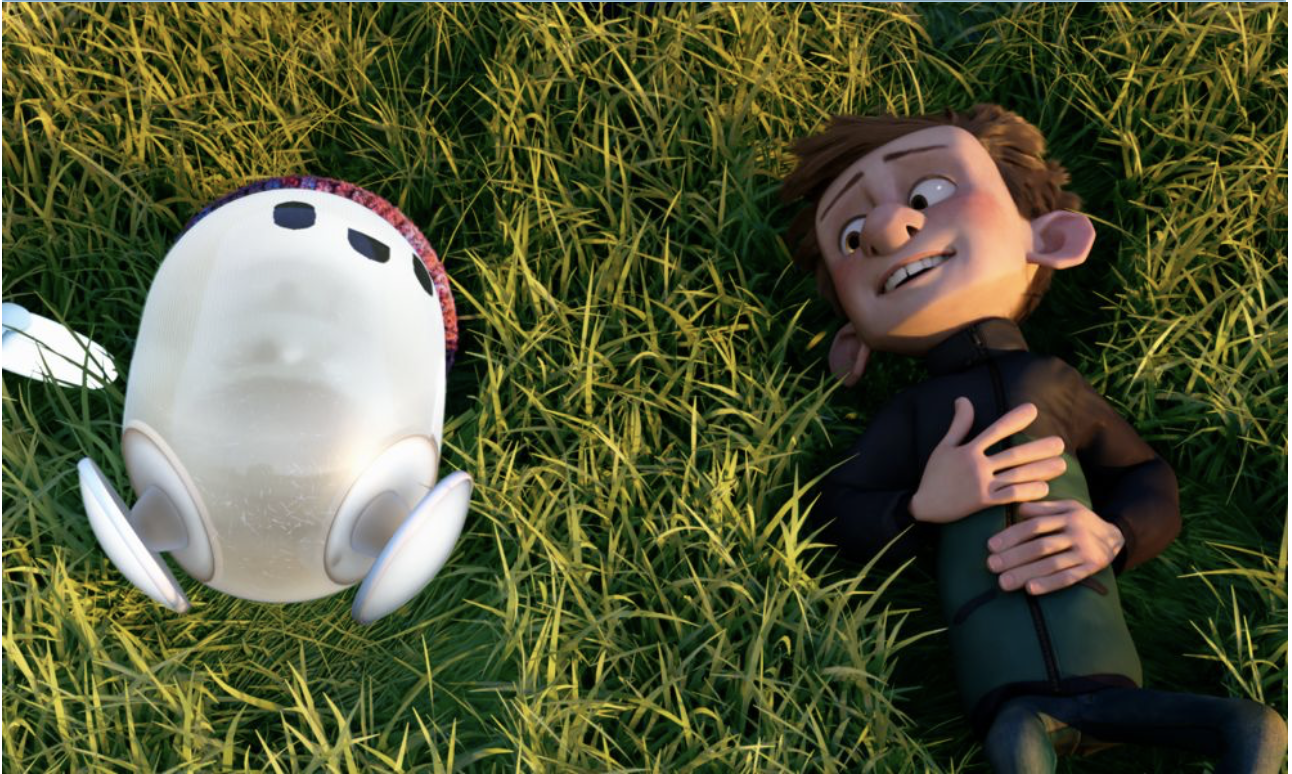 In 2011, Arthur Christmas was the most pleasant surprise of the year, but trying to convince even my close friends to forget the lackluster trailer and listen to me was an uphill battle. Ron’s Gone Wrong comes from the same creative team, and this time, I’m begging everyone who reads this to remember that I’m your friend and just trust me.

Ron’s Gone Wrong is the story of Barney Pudowski (voiced by Jack Dylan Grazer, It, Shazam!, Luca), a socially awkward middle-schooler who has trouble making friends. Every other kid in school has a B*BOT, a new walking, talking, digitally connected device known as your “Best Friend out of the Box”—somewhere between the Gigapets of the ’90s and an iPhone. When Barney’s father, Graham (Ed Helms, The Office, Rutherford Falls), realizes at the last minute that this toy is all his son wants for his birthday, he faces a huge waiting list. In desperation, Graham buys a slightly damaged B-Bot straight off a shipping truck driver in a back alley. The unusual behavior of Barney’s malfunctioning new friend causes trouble at first, but Barney soon sees advantages to the unique nature of his bot, whom he names Ron. Barney and Ron bond as they both start to learn outside of their programming, and their shared journey becomes a powerful lesson on what friendship really means.

Directors Jean-Philippe Vine (the original episodes of Shaun the Sheep) and Sarah Smith (Arthur Christmas) set a great tone for the film right from the beginning, following a visual style somewhere between Pixar and Aardman. Smith and co-writer Peter Baynham, whose credits range from Arthur Christmas to the Borat films, have created a richly textured story that is as heartfelt as it is hilarious, full of action and wonderfully engaging characters. The title itself should be a big clue that this is an American film made by British filmmakers, and the English sense of humor shines through in all the right ways.

There’s also no small amount of E.T. at play in Ron’s Gone Wrong, with a touch of Big Hero 6 and Short Circuit thrown in the mix, but it’s got a heart and brain of its own that prevents it from ever feeling like a wannabe. The film covers a lot of ground, from the disconnect caused by too much screen time to the toxic elements of social media culture. Ron’s Gone Wrong also covers data mining and mass consumerism, with some pointed jabs at Apple and other tech giants. There’s the very real danger that a movie with this much to say can get lost in a jumble of ideas and agendas, but the primary focus at all times is kept to telling a great story and giving us characters we will love.

Grazer is one the most charming comic actors in Hollywood for more than just his age range, and he makes Barney very easy to care about and to identify with. Zach Galifianakis (The Hangover, Missing Link) scores big with his portrayal of Ron, making him a classic character and a friend we’d all be lucky to have. Helms is great, and Oscar winner Olvia Colman gives her second standout performance in an animated film this year, following The Mitchells vs. The Machines, stealing more than once scene as Donka, Barney’s eccentric grandmother. The first rate musical score by Henry Jackman (Wreck-It Ralph, Captain America: The Winter Soldier) expertly moves between comically bouncy, rousingly adventurous and quietly touching, and it’s one of the year’s best.

Ron’s Gone Wrong is pure joy, and it’s the kind of film that encapsulates everything that I love about the moviegoing experience. There’s enough truth and insight in Ron’s Gone Wrong for several movies. For 106 minutes, I was a kid again, albeit one whose appreciation of children and true friendship has evolved over decades, and every minute of Ron’s Gone Wrong is one that I will cherish again and again. –Patrick Gibbs