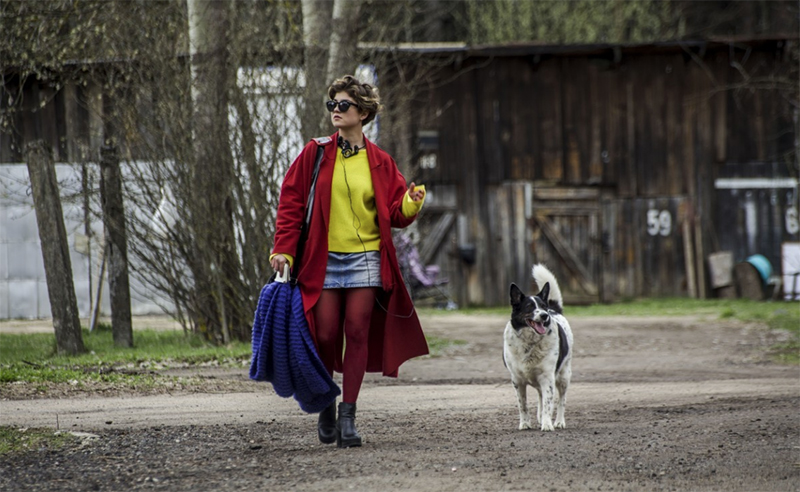 In the shadows of the crumbling Soviet Union of the ’90s, the young people of Minsk, without any job prospects, turn to the partying scene. Velya (Alina Nasibullina) finds herself in the midst of warehouse parties donning a synthetic blue wig and Dj’ing house music, but becomes disillusioned with the lackluster, drug-ridden scene and her unemployment, which forces her to hawk counterfeit oddities like a fake Armani jacket. To make matters worse, her mother (Svetlana Anikey) calls Velya a waste, because she hasn’t been able to make a use of her law degree. For Velya, the only way out of her oppressive life in Belarus is to apply for a visa to go to America—specifically Chicago, the birthplace of house music. After making a mistake on her (mostly fraudulent) visa application, Velya’s only solution, in her mind, is to spend the last bits of her money to track down the family with the phone number she accidentally put as her place of employment.

Velya’s imposition on a random, rural, Belarusian family in order to keep an eye on the phone in case the American Embassy calls is kind of ridiculous, showing Velya’s desperation to leave her life in Minsk behind. She immediately warms up to the two sons of the family, soon-to-be-married Soviet army veteran Stepan (Ivan Mulin) and the doe-eyed, impressionable, young Kostya (Ilya Kapanets), who takes a liking to Velya’s cassette tapes.

The theme of the movie centers around the dichotomy of Velya wanting more for herself amid the complacency of everyone around her in Belarus. Stepan echoes Velya’s mother’s words that everyone must stay in their home country, and mocks Velya’s idealism about America and her dreams of freedom. Despite their ideological differences, the two strike up a friendship quickly. While there is something endearing about the charm of rural Belarus and Stepan in particular, there is also something dismally patriarchal and rotten about the situation Velya has walked into with Stepan and Kostya’s family—especially as Stepan gets closer to his wedding day and his attraction toward Velya becomes obvious to everyone around them.

Nasibullina is absolutely captivating as Velya, an imperfect heroine trying to navigate her future through the tricky waters of post-Soviet Belarus. Her outfits, always an array of brilliant primary colors, shines against the drab background of the gloomy, soviet-era buildings in the crystal-factory town she comes upon.While Velya is sometimes cunning and deceitful, it’s easy to identify with her dreams for freedom and her growth as the toxicity of Belarus closes in around her. Stepan, while initially chivalrous and charming, seems to be haunted by the violence of his army past, and one scene captures how he was literally branded by the experience.

The way Stepan and Velya’s relationship evolves and subsequently devolves definitely strays in a direction that is unexpected for viewers. While trust is built up towards Stepan, a single decision leads to heartbreak and betrayal. And while Velya’s journey is painful and awkward at times, the film conveys a sense of hope for Velya, artfully portrayed by the protest she passes in the final scene where protesters chant for freedom. –Ali Shimkus