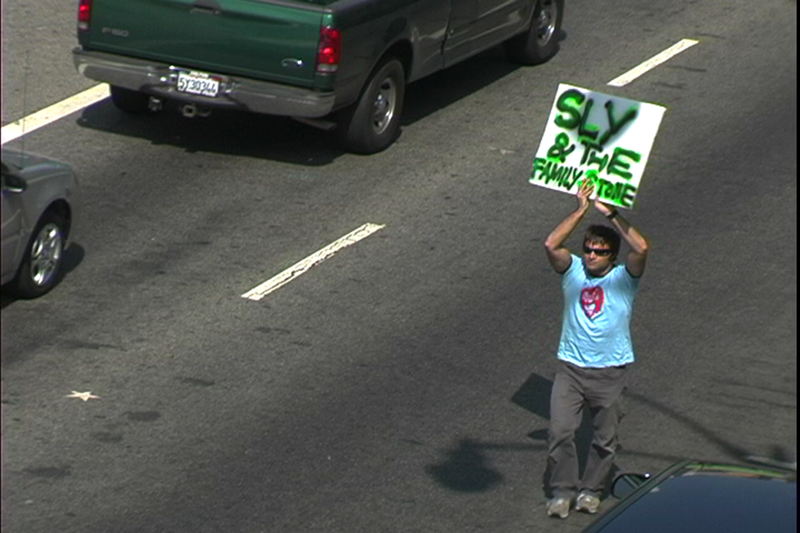 Slamdance Film Review: On The Sly: In Search of the Family Stone

On The Sly: In Search of the Family Stone

Starting innocently enough as a documentary of a fan trying to score an interview with their favorite musical artist, On the Sly turns into a decade-long search for Sly Stone, the frontman of Sly and the Family Stone and composer of hit classics like “Everyday People” and “Thank You.” The search is definitely a personal quest: the documentary starts out with some backstory on director Michael Rubenstone himself, from being dissatisfied in New York around the time of 9/11 to moving to Los Angeles in search of acting work—and how Sly and the Family Stone helped Rubenstone cope with the difficult times in his life in between.

Rubenstone travels across the country, using his personal budget to track down various people involved in Sly Stone’s life, and is at first met with some confusing and dissatisfying declines, including a stop at a house thought to belong to Sly Stone. He is met by a man who seems to not know who Sly Stone is, but is later seen at an event in Sly Stone’s entourage, showing just how deep Sly Stone’s paranoia about press really goes. Rubenstone’s search seems to start out with other fans like himself: He first meets up with a Sly and the Family Stone archivist and a biographer who also had a difficult time locating the elusive frontman of this progressive funk group. He slowly starts breaking into the circle, eventually meeting the extremely energetic, 82-year-old former manager of the band, David Kapralik, who turns over two scrapbooks’ worth of the Sly and the Family Stone history.

The documentary starts to take on the story of Sly Stone himself as told through the scrapbooks, starting with his musical upbringings around the San Francisco Bay Area as a preacher’s son, to his early, enthusiastic interest in music theory, to his eventual career in radio and production. The early prototype groups that preluded Sly and the Family Stone are highlighted, laying down a foundation for the band, which first came together as a ragtag group in San Francisco. Interviews with original members, including Freddie Stone and Cynthia Robinson, reveal that these first real gatherings imparted something unique and magical, where the band members knew instantly that they had created something amazing. Commentary from Dr. Cornel West offers perspective into what this pioneering group meant in the scope of the time, while interviews with personal friends of Sly Stone give insight into this musical genius’ mind and personal struggle.

The documentary then goes into the rise and eventual fall of the band—and Sly Stone himself—while trying to capture an interview with a man who does not want to be found. The highest point of the band, for the movie, was their performance at Woodstock in 1969. Clips from this epic performance are utterly breathtaking, with Sly Stone at the forefront in a white jacket, fringed on the sleeves, goading on the crowd’s participation. Kapralik has a brilliant, unscripted soliloquy warning Sly Stone, his “Icharus,” not to fly too close to the sun. Kapralik points to Sly Stone’s fringed jacket as his wings of wax, and the spotlight as his sun, and the documentary takes a solemn, almost tragic turn. As Rubenstone inches towards the truth, the people that he encounters, including the original band members, start to warn him that Sly Stone is not the man he once was—and yet the search for the ultimate interview prevails. –Ali Shimkus