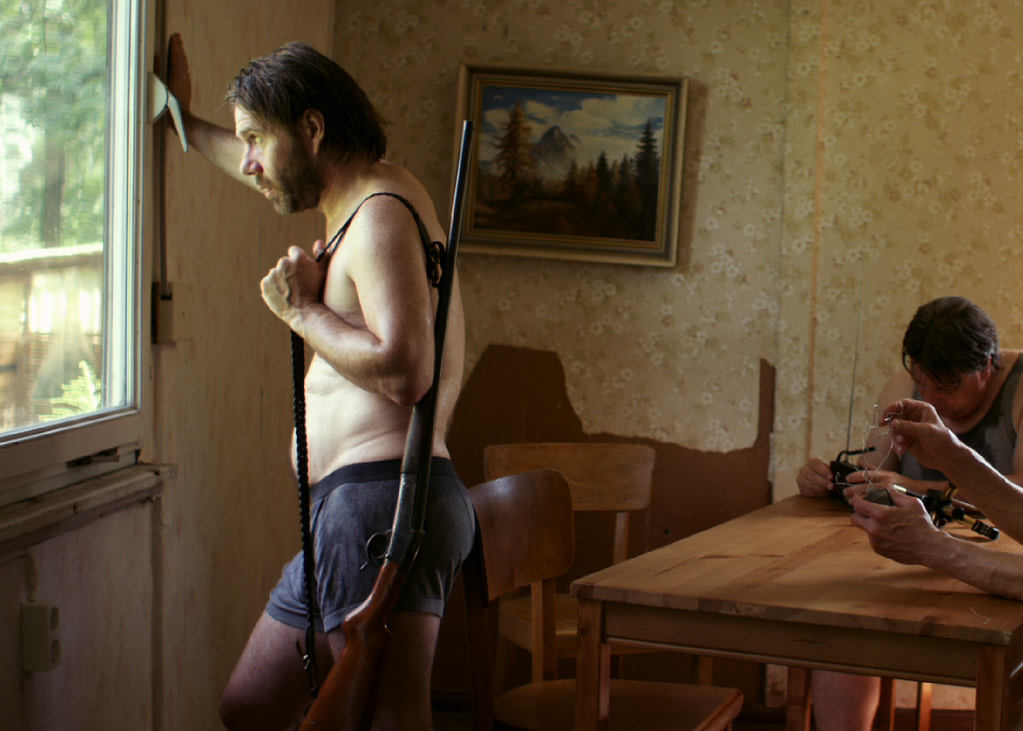 In a post-apocalyptic world, humans are driven to the brink of extinction via extreme and sudden temperature shifts. While Weather House does not give us many clues as to how the world came to be this way, it does show what a certain, cult-like group does in order to ensure its survival. Holed up in a rundown house, one man sits completely still, connected to a large plant for the entirety of the film, while another man runs random wires in awkward places all through the house as a woman records the white noise in between conversations with a boom microphone. Weather House is a minimalist look at a group of people who fall into a strange routine in order to cope with their surroundings. It is unclear whether the people think they are controlling the weather in some way, or if they are simply falling into these habits to give themselves a sense of normalcy. The strangest thing about the piece is that when a man with a gun (Jack Rath) enters the home claiming to be looking for his wife, none of the occupants seem to even notice that anything has really changed in their small atmosphere, and the gunman makes himself right at home, though he is initially suspicious of the behavior and accuses the group of being “another cult.”

Far from a fast-paced apocalyptic film, the movie lingers on close-up scenes of nature, such as rain dropping into a creek in slow motion, interspersed with the calculated and almost robotic motions of the actors as they go about the daily rituals in the house. While the gunman at first accuses the group of being just like other cults he has seen throughout his travels, his habits soon start to mimic the others⎯ mainly, the way they almost say nothing. There is a sense that either William (Erik Hansen) or Audrey (Inga Dietrich) are somewhat the leaders of the group, as they have the most dialogue and take the most initiative. The gunman posts himself at the window with his gun drawn, as if the group is going to run into trouble, while Audrey nervously paces through the house, often making very intentional steps that impede her movement in a straight path. The dialogue is very choppy—if one person speaks, it is almost as if to ponder something. The talking is not done to each other, but rather, at each other. Occasionally, the group is seen gathered at a table playing cards or eating a meal⎯ that is, until William decides to saw off two of the legs, which miraculously doesn’t seem to affect the leveling of the table and is met with only minimal protest from the other house members.

As the film progresses, the decay into madness seems inevitable, as the seemingly most rational character, the gunman, starts to adopt the strange, disconnected way of living that the other tenants already abide by. The irrational behavior of the Weather House occupants can almost seem to make sense by the end of the movie, as the scenes occasionally stop to remind you of the temperature and air pressure of the current situation. Weather House gives a glimpse into the madness and the cult mentality that can take over in situations where death and climate change is a near possibility. –Ali Shimkus

Preceded by Voyage of the Galactic Space Dangler (USA), directed by Evan Mann.