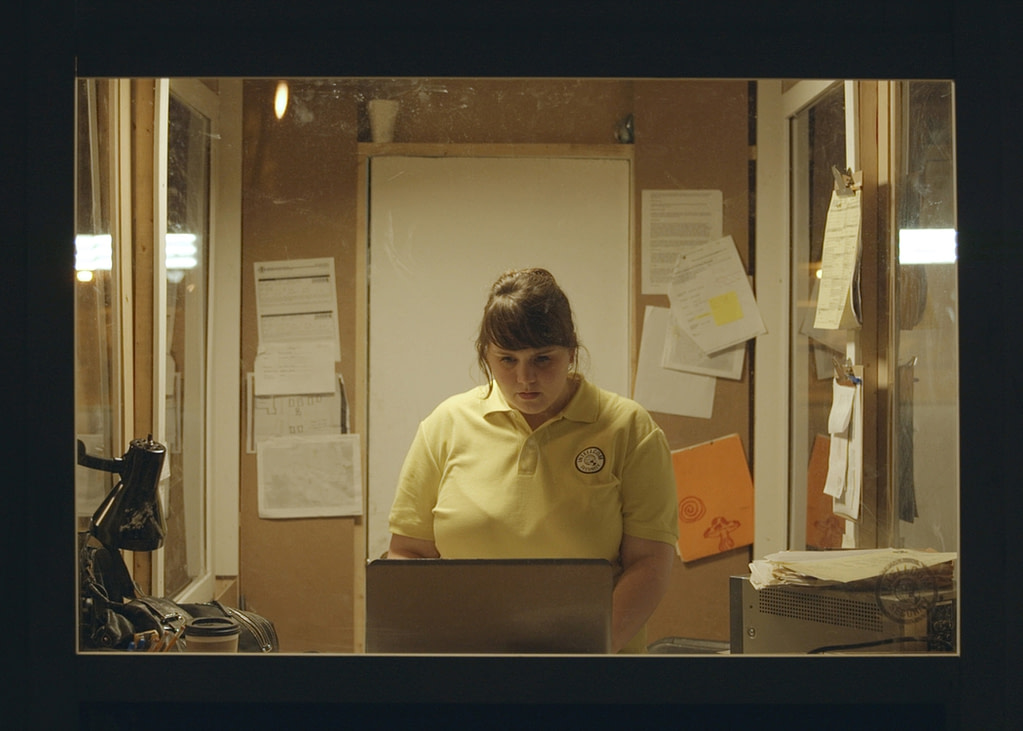 Toronto-based Joyce Wong’s first feature film, Wexford Plaza, is an at-times painfully real-life comedy about suburbia, isolation and ennui. In the film, Betty (Reid Asselstine) is a 19-year-old, late-night security guard at a dingy strip mall. At work, she mostly hangs around her two coworkers, including Rich (Francis Melling), who spends his breaks driving around, making crude comments, smoking weed and watching porn on his phone. At home, Betty appears to be mostly alone, scrolling through social media, ignoring lewd messages on her dating apps and deflecting her friends’ texts about hanging out. Betty’s life is a mundane one, but even more so, it’s lonely. When she heads to a bar with the other security guards and gets too drunk, the well-meaning albeit deadbeat bartender, Danny (Darrel Gamotin), gives her a ride home.

Wexford Plaza parallels Betty’s storyline with Danny’s. At 31 years old, Danny is ensnared by the same melancholy that plagues Betty, but in a different way. While Betty is struggling to “put herself out there,” Danny is in what appears to be a mostly happy relationship with his girlfriend, Celine (Ellie Posadas). When he unexpectedly loses his job, however, he finds himself with limited options and $12,000 of credit card debt. As he applies to Craigslist posting after posting and drives around in the car he shares with his mother, Danny eventually decides to start selling makeup and body products as part of a multi-level marketing scheme.

Meanwhile, Betty grows more and more fond of Danny. After a misunderstood sexual encounter between the two, both Betty and Danny find their lives unraveling—the crux of Wexford Plaza’s humor and heartache.

Wexford Plaza joins a league with plenty of other films that present coming-of-age tales in the post-internet age, but Wexford stands out for its immense sincerity. Instead of being too obvious about decrying the isolation brought on by new technology and social media, Wexford offers us two relatable characters who are working hard to make sense of their lives. Appropriately, we never find out how or why Betty and Danny got to where they are in life, or what their dreams and future plans are. Instead, we follow along, glimpse by glimpse, as each earnestly attempts to connect with other people, glean approval and find meaning in the day-to-day.

In many ways, Wexford Plaza depicts Betty and Danny’s stories the way the characters might perceive their own existences, moment to moment: the uncomfortable interactions, the distracted silences, the cringe-inducing sensations of embarrassment and desperation, disappointment and regret, emptiness and hope. It’s fitting that most of Betty and Danny’s interactions happen around the strip mall, too. Meant to be a social destination full of different businesses and people, the setting is instead dilapidated and boarded up, and it’s easy to get the sense that Betty and Danny have been left behind—floating adrift somewhere in suburbia, away from the rest of the world.

Newcomer Asselstine gives a remarkable performance as Betty, portraying her character with both subtlety and candor. Thoughtful and lighthearted—but not untroubled—Wong’s Wexford Plaza might well be one of the most approachable films at this year’s Slamdance Film Festival. –Kathy Zhou