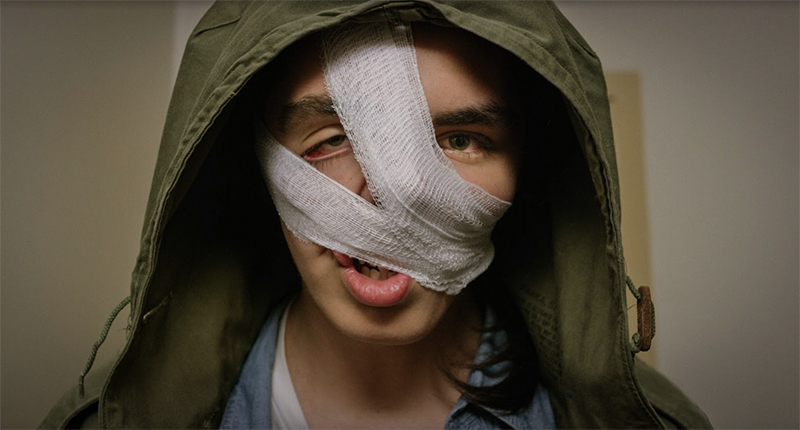 In a disorienting evolution, the film Happy Face is a piece that explores abandonment, fear and the interplay between society and self-worth. Beginning in a therapy support group, we are introduced to all of the characters, each having some type of physical deformity. The main character first introduces himself as Augustin, however, at the conclusion of the support meeting, he storms to the bathroom and peels back tape and bandages, revealing his flawless skin and a different identity—Stan (Robin L’Houmeau), a 19-year-old finance student and Dungeons & Dragons fanatic, whose grief becomes the orchestrator of his denial.

The film races between memories and the present moment, and in an opening scene, as the camera pans between isolated body parts—delicate cheek to nail, arm to forehead—we soon discover that his mother is a victim of breast cancer and has lost a breast. There is an unassuming tension between the mother and her son as she prods him not to leave her for his absent father. Later, we learn that her cancer has come back, and four tumors are growing in her jaw and brain.

As we are introduced to the members of the support group, we are also given insight into their stories and their goals. Lead by Vanessa (Debbie Lynch-White), a woman whose ability to empathize has grown from her own insecurity about weight and appearance, ends up needing the group as much as they need her. There is an overwhelming sense of fear and isolation present in the meeting, and each individual has a desire that is challenged by an undesirable sense of not belonging or loss. Because of this, Stan’s attendance exemplifies a great irony—in an attempt to deal with his mother’s inevitable disfigurement, he attends these meetings and helps to resolve the hurt of the people present, but in doing so, he leaves his mother in a hospital by herself as she undergoes treatment for a terminal cancer. He won’t return her calls and spends an increasing amount of time with the group, located in the same hospital she is staying at.

Stan’s identity is soon discovered by the rest of the group, but his eagerness to help prompts their forgiveness. Throughout the film, he evolves as the antagonist, the protagonist and, at times, it is greatly unclear what is taking place in his development. His anger drives many of the characters to break, which ends up helping them. He moves forward with the motto: “Break them so they get over the fear of being broken.” So they go through the action of breaking themselves, whether it be talking to a stranger or an ex-partner in order to make a breakthrough.

As the confidence and power of the group dynamics grow, each character takes on the persona and power of a different Dungeons and Dragons character, and by takings steps toward accepting themselves together, they earn their figurine. However, the storm of emotions experienced by Stan are also mixed with the morals, sexual desires and rage of those in the meetings, causing turbulence within the group.

Director Alexandre Franchi successfully shows the experiences of these marginalized individuals, with the subplot of Stan’s inability to confront the loss of his mother. The film moves fast, and by the end, it seems as if many moments were unresolved, however, the relevance was undoubtable as so many people are bullied and harassed because of their appearance. At times the story grew in unexpected ways with no resolution, causing a handful of scenes to feel out of place—but for those seeking a fast-paced challenge to their standards of beauty, Happy Face will prevail and inspire. –Makenna Sutter-Robinson