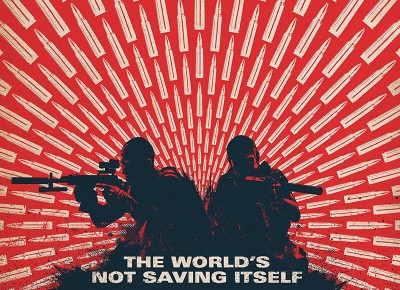 Those who like their sex and violence mixed with a complex narrative will probably want to stick to Game of Thrones, but that doesn’t make Strike Back a failure. In fact, the show’s self-awareness of its genre and its consistently high-octane action sequences are pretty damn impressive.

The third season pulls Section 20 agents Michael Stonebridge (Philip Winchester) and Damien Scott (Sullivan Stapleton) from their super rad motorcycle trip across California and throws them back into some hardcore anti-terrorist ass kicking. While Stonebridge and Scott appear to see their job as little more than an excuse to shoot bad guys and cash in on international booty calls, their commanding offcer, Rachel Dalton (Rhona Mitra), is at the end of her rope after watching terrorists murder Agent Baxter (Liam Garrigan). Winchester and Stapleton maintain a solid bromantic relationship as they bounce macho one-liners back and forth, but without the benefit of Winchester’s British accent, it’s damn near impossible to tell them apart. The bulk of the show’s gunfights, raids and suicide missions take place in their story arcs, but I actually found myself more drawn into Dalton’s parallel story in Beirut. She starts gradually losing her shit over Baxter’s death, eventually working with a highly suspicious double agent as she goes rogue from Section 20. Mitra, who often gets a bad rap as a K-Mart Kate Beckinsale, rips into this character—we can actually hear the fuses blowing as she frantically waterboards a terrified prisoner.

The dark horse of this season was Dougray Scott’s SAS-operative-turned-arms-trafficker—imagine Destro from G.I. Joe in real life. Scott digs into his natural charisma to show us a character who is more of a Byronic hero than a generic gun-running villain. His ode to the Scottish love of exploration as he shares an angry tryst with his boyfriend Farhan (Daniel Ben Zanou) takes an interesting departure from the show’s hyper-masculine comfort zone. It’s one of those rare moments in television where sexual orientation is simply another facet to the creation of a character —the show offers no commentary on Leatherby’s sexuality, other than the fact that it is one aspect of a surprisingly well-developed bad guy. Storywise, assigning him a romantic backstory and seeing Stonebridge and Scott exploit this relationship in negotiations made for an emotionally jarring confrontation.

With all of the efforts that the show puts into new supporting characters this season, it’s too bad that Stonebridge and Scott aren’t given more development. Neither of them is a stranger to tragedy, but they don’t really seem to develop much over the course of this season. There was an attempt to inject some nuance into Scott’s character by having him reconnect with the slinky Mossad agent Rebecca Levi (Lyne Renee), but the lack of chemistry between the two resulted in little more than a half-hearted sex scene.

In addition to audio commentaries for each episode, the Blu-ray copy comes with a pack of bite-sized featurettes that offer some behind the scenes insight into the show’s more spectacular stunts—I found “How To Fight Naked While On Fire” to be particularly useful.

The attempts to ground the show in legitimate storytelling succeed for the most part, but Strike Back is at its strongest when it revels in the fact that it’s a cocksure action flick that liberally combines body count with boobies.