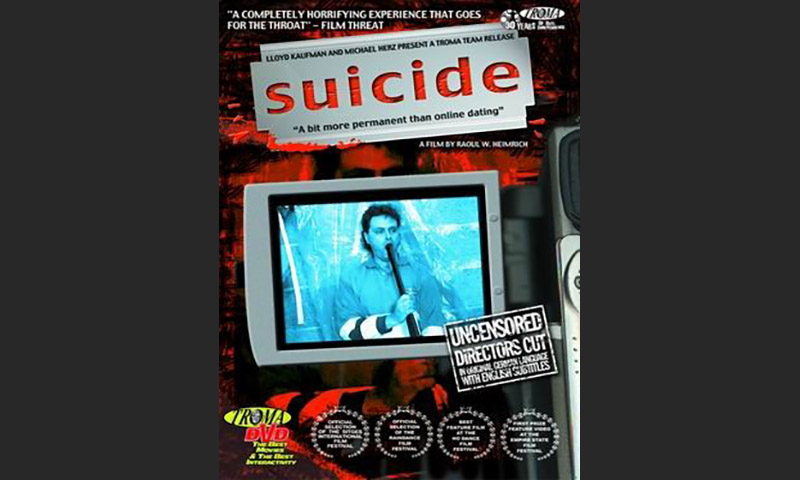 This movie was supposed to be scary and disturbing. Well, it’s not. It’s about as scary and disturbing as a box of well-nourished puppy dogs. I thought it was going to make me be all, “Dude, I saw Kill Bill like, five times and thought I could handle violence in movies, but this is too much!” Instead it made me be all, “Dude, I saw Kill Bill like five times.”This movie is about a German couple who start a website that films people killing themselves. It’s filmed in that Blair Witch car-sickness fashion to try to give it a realistic effect. Instead, it’s not very gore and the acting is just bad. There’s even one part where a guy is slitting his wrists and he slits them the wrong way! So much for realistic. I mean, come on, everyone knows that if you slit your wrists, you go the long way, up your arm and not across, or else you wont hit any veins. Duh!

Another thing about the movie that I didn’t like was the subtitles. Normally I don’t mind reading a movie, but since I was under the impression this movie would be super fucked-up, so I also got super fucked-up. But just to be on par with the movie, of course. This made reading the movie a bit of a challenge and to make it worse, they were speaking German. God, I hate the French.

On the DVD box of this movie, it says how sick and demented the ways these people kill themselves are. But they’re not. They’re normal ways to kill yourself.

I would have been much more satisfied if this movie was about lemmings. Lemmings are those little creatures that commit mass suicide and I’m not sure why. Like, what if this German couple set up a website where lemmings could e-mail them and be like, “Dudes, a bunch of us are going to walk off this cliff tomorrow and you guys are welcome to come film it. But since we are lemmings and that’s what we do, it’s not that big of a deal.”

Well, this movie wasn’t that big of a deal, either. If you are truly sick enough in the brain that you want to see people dying, skip this movie and rent Faces of Death or just log on to the good ol’ Internet. If you like crappy movies, then rent this movie. It’s right next to the new Lizzy McGuire section at Hollywood Video.