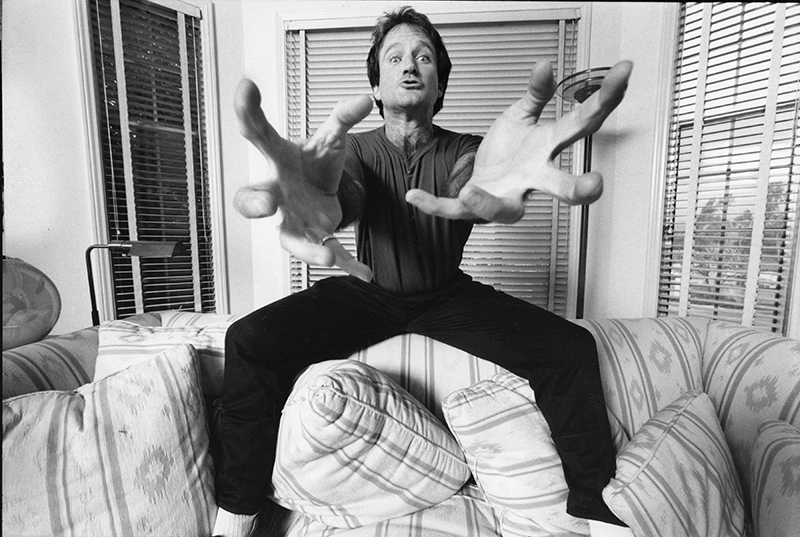 Robin Williams: Come Inside My Mind

“Come inside my mind,” says Robin Williams, in his own distinctive voice as the film opens with a scene from a different time—an interview where Williams uses an impromptu performance as the answer to a question about whether he can think faster than most people. After metaphorically pulling out the contents of his mind for the audience to see, he receives a standing ovation, proving that, in a way, he can. The documentary was rendered lovingly in memory of a man who was not without flaws, but whose zany, quick sense of humor enraptured his audiences. The film moves through Williams’ childhood, interest in improvisational theater as a way to meet women, and his climb up the ranks of the comedy to his eventual stardom. All of this keeps this sense that Williams had both his wild, off-the-cuff humor persona that most fans remember him by, as well as his quieter side that not many people saw and will probably never be explained.

I felt as though the matter of Williams’ death in this documentary was treated with a great deal of respect. Having been a relatively recent loss, the movie made no pretensions about why Williams may have committed suicide and didn’t dwell too much on the death but, rather, on his life. While hints are dropped throughout the retrospection of Williams’ past that he may have been lonely or struggling with his recent diagnosis of Parkinson’s Disease, I liked that the film focused on Williams’ accomplishments, the happier parts of his personal life and the highlights of his career.

Williams’ legacy seemed to be the strongest with his family, and those who were closest to him. Commentary from Billy Crystal and Pam Dawber (costar on The Mort and Mindy Show) were, for me, the most heartbreaking elements of Williams’ passing. The fact that Crystal kept phone messages of Williams pretending to be different, hilarious characters over time shows the depth of their relationship and how Williams was genuinely an entertainer in every aspect of his life.

The film used archival footage to hone in on why Williams was such a memorable comedian, but there was a disconnect between the early part of Williams’ career and the later half. It seemed to me that there was a lot of emphasis on the ’70s and ’80s, but the ’90s and ’00s were rushed through for time’s sake, despite containing some of Williams’ best work. Understandably, Williams’ troubles with substance abuse at various points in his life seemed to be glossed over out of respect for him and his family, but Williams himself was open about his struggles as he was navigating through them, and the documentary may have softened this aspect of Williams’ life as not to pass criticism on him posthumously. I felt as though the movie could have made a more decisive stance on suicide in general, but ultimately, the decision to focus on Williams’ legacy rather than the tragedy was the most respectful and effective way to go.

Williams’ own words throughout the narrative were extremely powerful and emotionally wrought—toward the end of the film, there was a clip of a younger Williams looking out on the San Francisco Bay, where his ashes would later be spread after his death. Knowing that the inevitability of his death will be in the next scene, the room was absolutely silent, and releasing into tears as this moment of serenity gave way to news stories about his suicide. The crowd’s reactions to the different aspects of the movie were telling—even Williams’ earliest stand-up from the ’70s seems to have stood the test of time with the audience in attendance. Going through the highlights of Williams’ life is like reopening the fresh wound of his death and feeling his loss all over again.