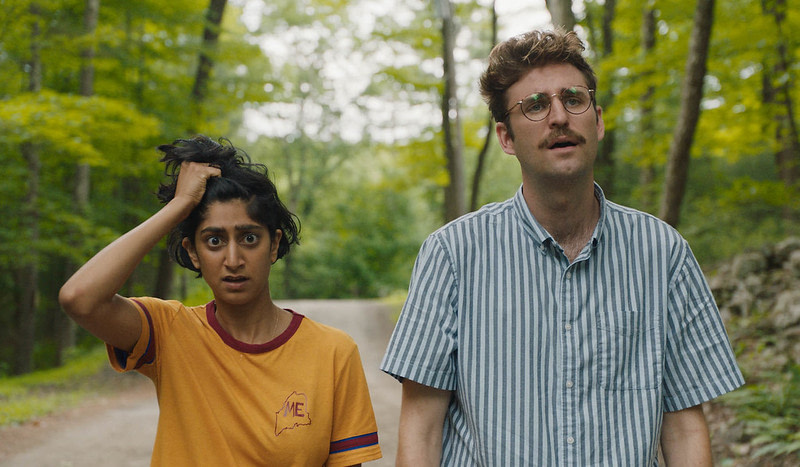 Sundance Film Festival: Save Yourselves!

Save Yourselves!
Sundance Film Festival

The timing couldn’t be worse for Su (Sunita Mani) and Jack (John Reynolds) to go off the grid. The plugged-in, stereotypical millennial couple spend the majority of their time together in their own separate bubbles, staring at their phones or laptop screens. Charmed by their friend who has disconnected from the real world in order to travel, the couple leaves Brooklyn for upstate New York. They decide to unplug in order to reconnect with each other, vaguely setting the goal to “become better people” in the process. It becomes glaringly obvious to the audience that the world is under attack by aliens just as Su and Jack try to reconnect with nature and each other, oblivious to the chaos ensuing around them.

Save Yourselves! is witty, charming and unpredictable. A funny twist on a War of the Worlds–type situation, Su and Jack are the types of characters who are the least likely to survive the apocalypse, yet their efforts are amusing and sometimes even clever. Figuring out that the aliens are attracted to ethanol, Jack uses bottles of wine as a “distraction bomb” for the aliens in order to make their escape. Even though Su and Jack are oblivious and inadequate for survival, their quirkiness is infectious, daring the audience to root for them to make it through their ordeal. Mani and Reynolds have a dynamic chemistry that hints at underlying issues for their characters—such as possibly wanting a baby in the future, despite being barely able to look away from their phones long enough to understand what is going on around them.

The design of the aliens—which Su and Jack call “poufs”—are imaginative and hilariously benevolent-looking. I appreciated that the majority of the film focuses on the dynamic between Su and Jack instead of relying on CGI or special effects to tell the story. While most of the film is just Mani, Reynolds and their onscreen chemistry, other characters, such as Su’s mother, serve as important plot devices, even though they never appear onscreen. Su’s mother’s overbearing personality and penchant for Fox News is revealed through her voicemails. Even though nothing else is known about this character, she is easily imagined, speaking to the subtlety and effectiveness of the script.

Save Yourselves! relishes in an apocalyptic, dark humor, highlighting how clueless society has become by relying too much on the internet and becoming out of tune with the real world. Every twist of the story is unpredictable. While I was hooked on every quip and exchange between Su and Jack, I wondered how the story could possibly end for them, as the chances for survival become more bleak as the story progresses. While the film plays with themes of technology and selfishness, nothing felt to overbearingly preachy or overwrought, due to the humor in the script and Mani’s and Reynolds’ delivery. The ambiguous ending was surprising and symbolic. While it does leave the story on a sort-of cliffhanger, I felt as though it fit with the rest of the film. Overall, Save Yourselves! represents what Sundance films should aspire to be: original, exciting and insightful.