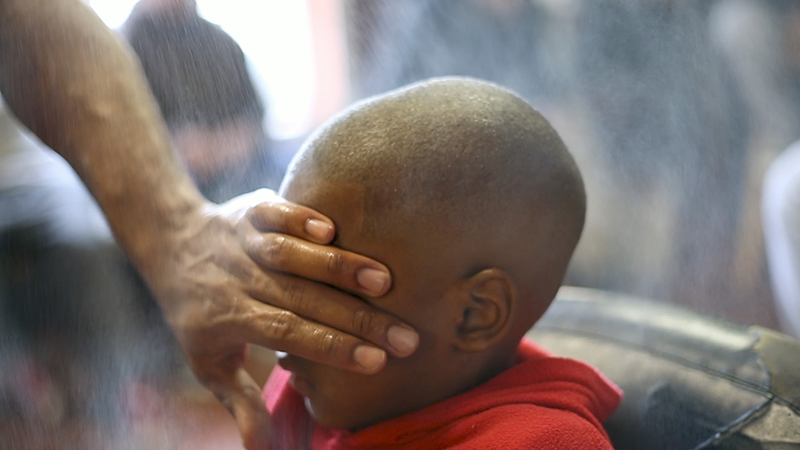 Hale County This Morning, This Evening

Director RaMell Ross describes the loosely developed plot of Hale County This Morning, This Evening, as an “anti-narrative.” The film is a series of beautiful scenes of Hale County, Alabama, and seems to be a love letter to the people there, specifically the black community. The film goes over random snapshots of Ross’ life after his move to Alabama over the span of five years, with him as an unnamed, never-speaking point of view, giving an intimate look at the the lives he documents. Viewers are introduced to Quincy, an ambitious young man who is just starting his family with his partner, Boosie, and their young baby, Kyrie. Ross also focuses on Daniel, a young man who is extremely driven in his passion for basketball. Daniel sees basketball as his ticket to a good college, hoping to avoid working at the catfish factory, like his mother and most of the people in town. In between scenes of Quincy’s family and Daniel’s journey are viscerally gorgeous snapshots of nature—including even the cotton fields surrounding Hale County, which serve as a constant reminder of the history of the area.

Ross seems to have fascination with the natural, marking the passage of time with scenes of the sun and moon rising and setting, as well as time-lapse views of the stars rotating through the sky underneath the trees. The sounds of crickets chirping as someone plays disjointed notes on a flute in the distance stick out in the opening and closing scenes, imparting congruity to the various memories created by the film.

Cinematically, the atmosphere that Ross creates through his focus on the natural elements of Alabama create a visual poetry that defines the film. The film operates as a collection of nostalgic memories, some of my personal favorites being those that Ross creates with thunderstorms in the background. In one scene, a child and an adult lean into the wind in front of Quincy’s metal trailer as a tempest roars in the background. In another, a few girls hang out under the awning at a school as the rain pours down, singing songs to each other. There is also an ever-present sense of Alabama’s tragic past, as one scene lingers as a car approaches a plantation. There are cuts to a vaudeville black-and-white film, where actor Bert Williams, donning black face, creeps through thick brush. While nothing is really said during this scene, it is one of the more powerful statements made throughout the film—the plantation, a representation of slavery, sits hidden among trees along a dirt path, having survived over the last 200 years. The footage of Williams in blackface, peering in from a different time in between shots of the plantation in the present, reminds us that racism is an ongoing issue, despite those who purport that it no longer exists.

Personally, the anti-narrative style of telling a story is effective for me. There was a sort of unexpected nature to the film, where the viewer isn’t sure what would happen next, which elicits the viewer to live in the moment with each scene. The stunning visuals and meticulously captured sounds of Alabama in the summer made the landscape seem dreamlike and surreal. The focus of the film depicts black identity, specifically in the American South. I think Ross captured the narratives perfectly: the love and loss within the family structure, the fight to escape a fate, the racism that ominously lingers like a specter in the background, and the strong communal spirit that can overcome it.