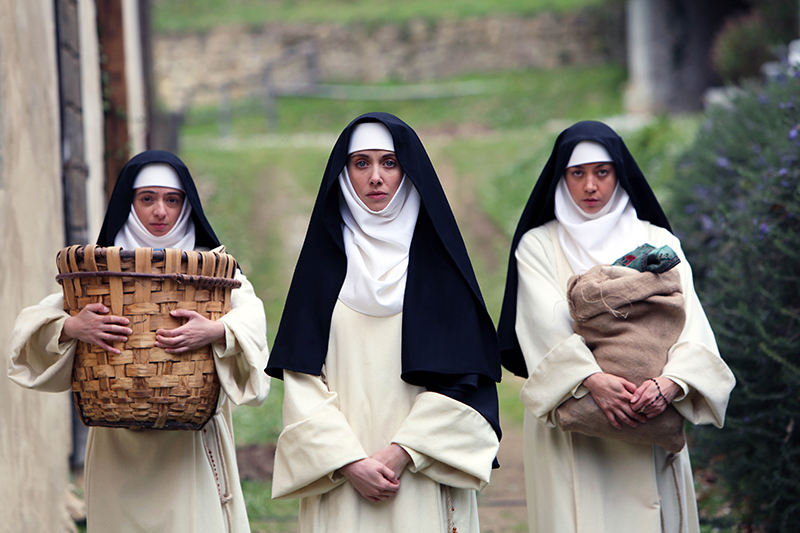 Alison Brie, Kate Micucci and Aubrey Plaza appear in The Little Hours by Jeff Baena, an official selection of the Midnight program at the 2017 Sundance Film Festival. Courtesy of Sundance Institute.

During the title screen of the raunchy medieval tale that is The Little Hours, we learn that the film is based on The Decameron, a collection of a hundred short stories written by Giovanni Boccaccio in the 14th century. While saying this film is based on The Decameron is a lot like saying A Knight’s Tale is based on The Canterbury Tales, The Little Hours embraces the time period of its source material, merging two of Boccaccio’s bawdy stories that create a darkly comedic period piece that makes one seriously reflect upon the film’s risqué source material. Jeff Baena’s (Life After Beth) irreverent interpretation of Boccaccio’s debauched yarns makes us appreciate the fact that sex comedies have been funny for hundreds of years.

The Little Hours tells the story of Sisters Alessandra (Alison Brie), Fernanda (Aubrey Plaza) and Genevra (Kate Micucci), three bored nuns whose tedious routine gets a bit of a jumpstart when Father Tommasso (John C. Reilly) recruits a recent runaway by the name of Massetto (Dave Franco) to work as the convent’s gardener. It’s an opportunity that Massetto welcomes—not only does he get to work alongside three hot nuns, but he also gets a reprieve from an angry nobleman (Nick Offerman), who wants Massetto’s head for fooling around with his wife.

Throwing out a cast list of that caliber (not to mention Molly Shannon’s beleaguered Mother Superior and Fred Armisen’s prim bishop) is a comedic gold mine. The problem with assembling this mighty cast is that it’s too easy to give them lines and silly costumes and watch them run away with the story, which appears to be what happened with Baena’s screenplay. What The Little Hours has in comedic capital, it lacks in narrative focus. Since each sister sees Massetto as the focal point for their own repressed sexuality, bouts of jealousy, paranoia and gossip start filling up the storyline, and, oddly enough, it’s pretty easy to see where the film is headed.

Despite the fact that both witchcraft and hallucinogens work their way into the film’s conclusion, I couldn’t help but feel like The Little Hours was a bit toothless overall. While the cast is funny, it’s a funny we’ve seen before. Aubrey Plaza is acerbic and sarcastic, Nick Offerman is basically Ron Swanson in a page-boy wig and it’s not much of a stretch for John C. Reilly to play a boozy priest—though Kate Micucci breaks out of her typical mousy performance into a ravaging force of psychotic rage in the final act.

Though the humor is consistent throughout, the end result of The Little Hours comes across as more puzzling than satisfying. It might not be the most rational thing to ask about the filmmaker’s vision when the film involves nuns going mad with horniness, but that’s where the gaps in the story inevitably took me. Was this supposed to be a statement on religion? Women? Sexuality? Or was it supposed to be an archetypal role reversal that placed an attractive young man at the mercy of three pervy women? These are questions that have no answer, but nevertheless managed to continue to nag at me after the film had ended.

All the same, for those who can forgive the film’s threadbare storyline and focus on the gleeful absurdity of two nuns verbally abusing an old man and Nick Offerman’s deadpan delivery of trendy torture maneuvers, The Little Hours will not disappoint. –Alex Springer