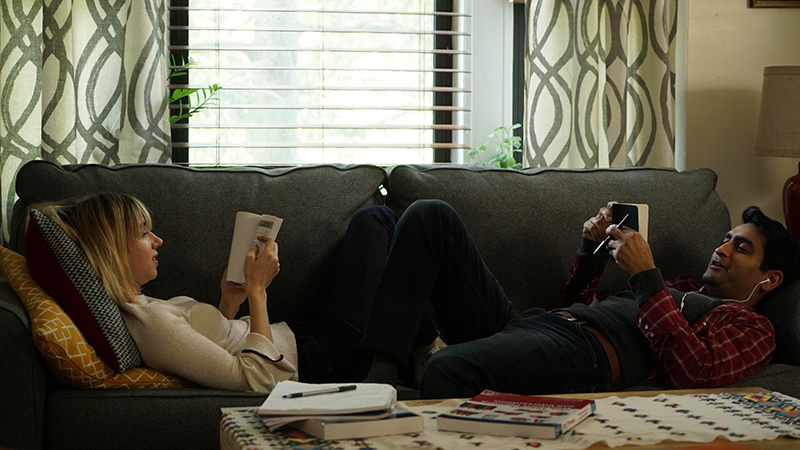 Zoe Kazan and Kumail Nanjiani appear in The Big Sick by Michael Showalter, an official selection of the Premieres program at the 2017 Sundance Film Festival. Courtesy of Sundance Institute | photo by Nicole Rivelli.

I have Kumail Nanjiani and Emily V. Gordon to thank for creating and hosting The Indoor Kids, one of the only video game podcasts that gave me faith in gamers as a community. It’s been good to see both of their careers take off, a feeling which has only been extrapolated after watching The Big Sick, a dramatized retelling of how Nanjiani’s and Gordon’s met, fell in love and got married. It’s a story that deftly balances its comedy and drama, which is exactly the kind of film that attracts the interest and production acumen of Judd Apatow and Barry Mendel (Trainwreck, Bridesmaids). Add to that the directing talent of comedian Michael Showalter, and you have the recipe for a romantic comedy tailor-made for people who hate romantic comedies.

The Big Sick unfolds in the nocturnal realm of stand-up comedians, which is familiar territory for Nanjiani, (who co-wrote the script with Gordon) Apatow, and Showalter. Nanjiani plays a cinematic version of himself, a Pakistan-born comedian who is struggling to reconcile his career as a stand-up comedian with the cultural values of his traditional family. When he meets Emily (Zoe Kazan), a lovely and intellectually stimulating psychology student, the pair forms a casual relationship that is destined to become true love—once it goes through a hell of a lot of problems.

Typically, films that dig in to the world of stand-up comedians run the risk of being alienating to those who are not comedians themselves. It’s a pitfall that the Showalter avoids with his interpretation of the script—he’s completely focused on telling a compelling story, not on showing us how witty and hardworking the film’s comedians are. The Big Sick works hard to maintain the film’s careful balance between some truly funny jokes and some truly disastrous heartbreak.

One of the most successful aspects of The Big Sick is how it treats those that love the romantic leads. Despite the fact that Kumail refuses to entertain his mother’s constant efforts to find him a suitable Pakistani wife, it’s evident that he still loves his family—a love that creates the first obstacle in his successful relationship with Emily. The second obstacle comes as Emily is placed into a medically-induced coma—which takes place only days after the pair have endured a nasty breakup. Kumail’s first introduction to Emily’s parents (Holly Hunter and Ray Romano) takes place at the bedside of their comatose daughter, and it’s the relationship that develops among the three of them that ends up taking center stage throughout the middle of the film.

It’s difficult to think of a romantic comedy where the leads’ parents and families are treated with such devotion. Emily’s parents’ slow acceptance of Kumail’s constant presence at Emily’s side begins in the stages of painful awkwardness and concludes with genuine love and affection—watching Hunter tear into a heckler for yelling that Kumail should go back to ISIS is a thing of frightening beauty.

Perhaps what makes The Big Sick stand out from other entries in the romantic comedy genre is because it’s a film about love itself. Any time two people find each other and fall in love, it has the power to bring two whole camps of completely different people together, and that’s a concept that tends to get neglected in other love stories. It’s time to add The Big Sick to another successful, funny and unexpectedly powerful film in the Apatow collection. –Alex Springer