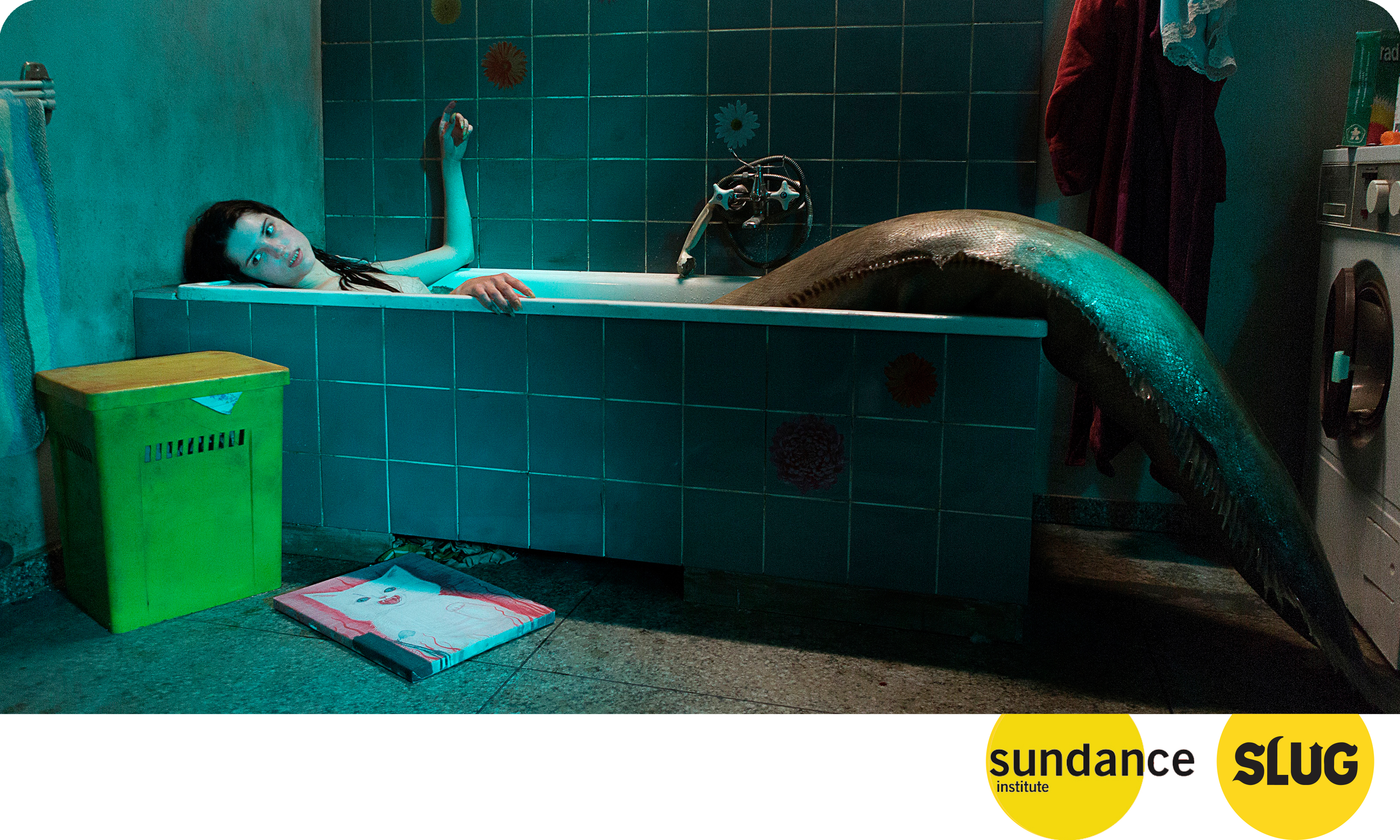 At SLUG Magazine, we’re wont to qualify music we review in equations made up of different bands or albums. I would equate Agnieszka Smoczyńska’s The Lure to Twin Peaks + The Forbidden Zone + Grease + Ministry + Rose McDowell. The Lure presents an enticing confluence pop culture influences in its ’80s setting—I never considered that I’d see a musical at Sundance, but I now have, and The Lure proves to be a batty one. Silver (Marta Mazurek) and Golden (Michalina Olszanska) come ashore before the house musicians of Warsaw bar Adria and walk into the nightlife scene as singers and burlesque performers for the club. Men applaud and gawk at the two mermaids as they sing and dance—and with a splash of water, their fishy, iguana-like tails emerge and aid them to win the adoration of the bar’s nighttime crowds.

As Silver and Golden integrate into their new environment, Silver begins to fall for the baby-faced, blonde bassist, Mietek (Jakub Gierszał), who, sadly mentions that he will always see Silver as a fish, despite his attraction to her. While Silver plays the love game, Golden stays true to her mermaid roots as she seduces a hotshot guy at the bar only to eat him during a make-out session in his car. As Silver falls in deeper with her new beau, a mysterious punk rock merman (whose horns have been removed) warns that if Silver’s love ends up marrying a human woman, she’ll turn to sea foam. The two sisters bicker and incur the wrath of their night-club overseers in this rollercoaster of otherness.

Smoczyńska’s feature-length debut is a hit. She superlatively employs campy tropes—through musical numbers, bawdy dad jokes and so on—and allows Silver and Golden to dazzle the screen with their beautiful mermaid singing voices and snarling cat fights with protracted fangs and dilated pupils. 1980s horror B movie techniques peak in for comedic effect every so often, except for when Smoczyńska commands them for unsettling and creepy purposes. The Lure is rife with absurdist images, such as the mermaids’ grotesque tails or Silver’s legs-transplant surgery. Through moments of magic realism, Silver and Golden smoothly maneuver through their story of love and horror.

Smoczyńska treats Silver and Golden as super animals bestowed with human faculties. One drawback from this approach is that the two mermaids must develop from a standing jump. Aside from Silver mentioning to the club owner that she learned Polish on a beach in Bulgaria, The Lure doesn’t fill out any aspects about the mermaids’ past. Their unclear history is romantic and enigmatic, but Silver and Golden of the sea remain flat for half the film, and even though they’re mermaids, their sexuality and bestial strangeness characterize them, for the most part. I felt that their roles as protagonists were somewhat weak in this regard.

Pound for pound, however, The Lure is simply fun. The musical numbers make the film and lend it its allure. Smoczyńska’s mix of genres generates a zany world where particulars become less important and a scene’s weirdness imparts its value. The Lure is about unsettling images penetrated by irony, and it soars within this distinction. It ignores some rules of storytelling to bolster other aesthetic elements. If you can see The Lure, take advantage of the opportunity!