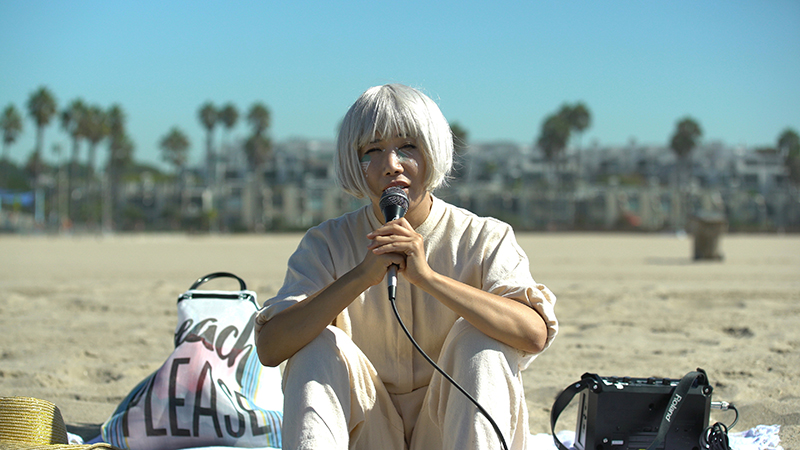 Played by the delightful Vivian Bang, White Rabbit’s Sophia is an L.A.-living, Korean-American artist. She lives alone, bikes around on a cruiser, organizes strangers’ homes for TaskRabbit funds, and uploads Mukbang videos of herself smushing her face into piles of Cheetos puffs. Mostly, though, she’s a performance artist, making and staging the type of “art you can’t sell.” Equipped with a short white bob, long gloves, a loose onesie/jumpsuit and pastel face paint, she stages public performances, amplifying impassioned monologues through an over-the-shoulder mic setup. From speeches to soliloquies to sermons, Sophia takes on and assumes different identities in these public interventions, often examining Korean and Korean-American issues. In one, she’s standing in a grocery store, donning an accent and relaying her life’s story as a struggling Korean shop owner. In another, she’s at Echo Park Lake, questioning why the media portrayal of the 1992 Rodney King riots seemed exclusively to pit the city’s Korean Americans and Black Americans against one another.

Sophia is earnest, curious and open, refreshingly so, but when we meet her, she’s a bit stuck. She’s recently out of a breakup, and she’s not getting views on her YouTube videos, let alone any fanfare for her performances, which only really reach indifferent, straggling passersby. But things start to change for Sophia after a series of encounters with a stranger, Victoria (Nana Ghana), a grounded and self-possessed photographer. As the two quickly connect and spend more time together, Sophia feels herself fawning over and falling for Victoria.

White Rabbit is a wide-eyed and heartfelt dramedy, compelling with a clever, entertaining premise before digging into its lead heroine. We watch Sophia get into and react to curious and amusing situations, from holding up a line of cars as she slowly bikes up a hill to getting pressured into giving a horseback ride to a random kid. We catch her when she’s vulnerable, video-chatting with her mother, reaching out to her ex or reminiscing about art school with a friend. Throughout, we watch her lash out at, apologize to, Instagram stalk and obsess over Victoria.

White Rabbit offers a true and fitting depiction of race, too. (In one of my favorite exchanges, Sophia tells Victoria that she learned English watching John Hughes films—hence the reason she’ll eternally sound like a teenage Valley girl.) It’s clear that Sophia’s Korean heritage is an important part of her identity, but it isn’t the only part; and while Sophia channels different Korean/Korean-American identities and issues in her performances, her characters remain separate from herself. When a filmmaker reaches out to her with a small acting role, Sophia is apprehensive but excited, until he asks her to affect an accent. After Sophia finishes her somewhat rambling, convoluted monologue about the 1992 L.A. riots, Victoria strikes up a conversation with Sophia, pointing out what Sophia still might need to learn when it comes to race in America.

Co-written by Bang and director Daryl Wein, White Rabbit is deeply felt and full of life. Bang and Ghana magnetize together for a sunny dramedy that burrows into the White Rabbit hole of what it means to form connections, form experiences, make art and make sense. –Kathy Rong Zhou