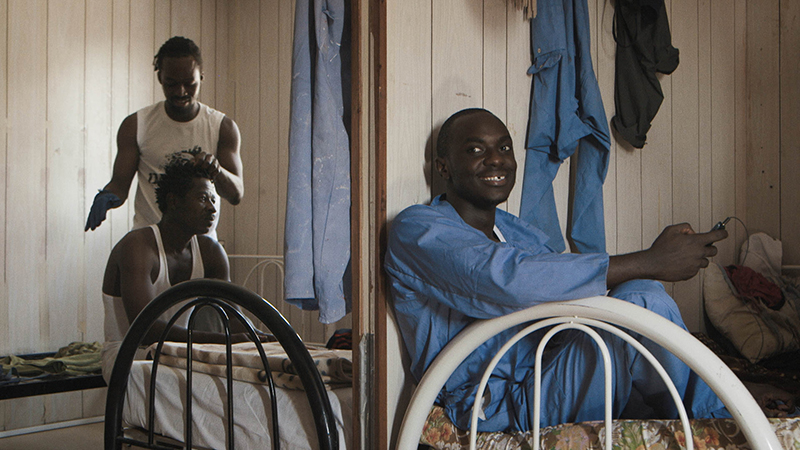 Samuel and Calton appears in The Workers Cup by Adam Sobel, an official selection of the World Cinema Documentary Competition at the 2017 Sundance Film Festival. Courtesy of Sundance Institute.

The Workers Cup follows men who work in camps in Doha, Qatar, for Gulf Contracting Company (GCC). This company is one of the construction businesses developing the city in anticipation of the Qatar-hosted 2022 Fifa World Cup, and the bulk of their workers traveled there to escape crippling unemployment in their home countries. They hail from countries spanning from Africa, the Middle East and Asia, but despite their various backgrounds, they share a passion for football (“soccer” in the USA). One man, Kenneth Kwesi, came on the premise that he could easily join a football club, a lie that his recruiter told him in Ghana. To boost morale and to show off the purported value that they hold for their workers, a coalition of development companies participate in a football tournament, wherein each company assembles a team. It’s safe to assume that each team that participates lives and breathes football—but since GCC is our team of champions, we know that football inspirits and animates them, keeping them alive amid their demanding work-camp environs.

The company’s workers essentially become indentured servants—if not economic slaves. They sign their lives away and cannot even leave the company without its consent. Though they have workers’ rights and are entitled to one day off per week, they customarily work 12 hours a day, seven days a week. Even a date with a woman arranged online raises eyebrows enough to warrant a plausible visit to a “higher-up’s” office. The opportunity to punctuate their dreary routines with this sport, however, becomes their vocation. Kwesi becomes the team captain, and they face off against another company team. They lose dismally. From there, they vie for more training, declaring that they would like to represent GCC with the utmost honor. Moving forward, they improve their performance in an upswing. With each win, their boyish excitement bubbles as we root for them. All while exuding pride for their company team, though, they lament their prison-like conditions in their worksite and camps behind the scenes of football matches. One scene features a discussion among team members about what qualifies as freedom. The Workers Cup juxtaposes their realities on and off the field, and we feel just how much this game means to them on a palpable, existential level.

When I say palpable, I mean that I am on the edge of my seat with each goal in a GCC game. Each goal that the on-field team scores causes their teammates on the sidelines to erupt in celebration. It’s infectious. Even viewers who don’t relate to football can get behind the team. Their brotherhood charms us, and we can relate to their spiritual sense of purpose in playing football and earning more training time from their General Manager. This camaraderie also accentuates the grim reality that these companies use their teams’ notoriety as a marketing ploy to draw even more intrigue from potential workers and as a way to soften their image in the way of workers’ rights. As the GCC team advances to crucial games, they grapple with their brief fates as workers-cum-athletes in a world where they can’t even shop at the same mall as rich people.

Even though The Workers Cup offers a bleak perspective about one of the world’s most celebrated events, we see “unity in diversity” in these men. We see their drive to realize their dreams in spite of an undesirable context. We watch them as football players. You’ll see it, and you’ll feel it. –Alexander Ortega