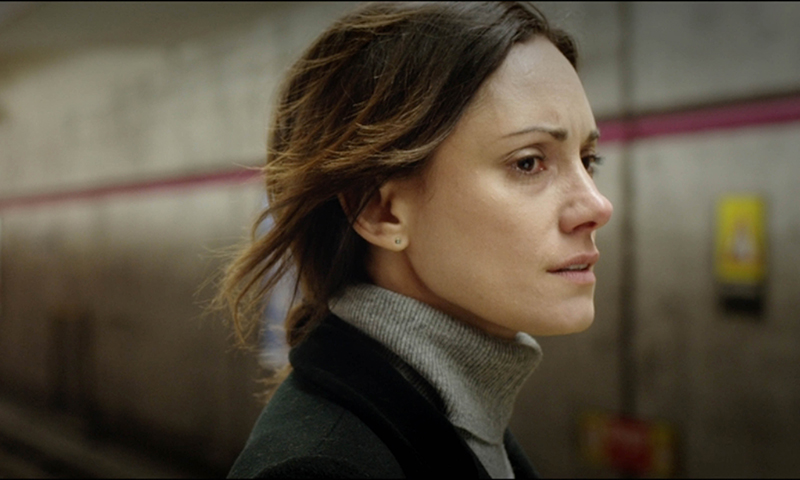 Creating and distributing an anthology of short films is extremely difficult to pull off. Like it or not, audiences will subconsciously pit each film against one another until they find a clear winner and a clear loser. XX fights that battle admirably—despite its pitfalls, it remains a solid vision of female-driven horror—but ultimately falls victim to the dangers of anthology filmmaking.

XX kicks off with Jovanka Vuckovic’s “The Box,” a subdued story that explores and exploits the maternal fear of a mother losing control of her family. While Susan (Natalie Brown) is riding the subway home with her two children, her son Danny (Peter DaCunha) asks to see inside a stranger’s Christmas present. Though we don’t see what he sees, we learn that the revelation had some kind of malevolent impact on the small boy when he starts to refuse his meals. Throughout his physical deterioration, Danny shares his secret with his sister and father, causing them to stop eating as well.

“The Box” establishes a profound connection to mothers everywhere who are killing themselves to keep their families running, but the fact that several months are supposed to fly by in a 20-minute film takes the thematic piss out of the story. It’s a motion picture idea crammed into a short film frame.

The next chapter is called “The Birthday Party,” and it happens to be the directorial debut of Annie Clark, better known as the musician St. Vincent. This chapter feels less like a horror film and more like a dark satire—which is actually a nice change of pace. “The Birthday Party” sees Mary (Melanie Lynskey) struggling to arrange the best birthday party on the block for her daughter Lucy (Sanai Victoria Cunningham). The problem? Her husband appears to have killed himself. Instead of calling the authorities and potentially ruining this special day, Mary goes to great lengths to conceal the corpse.

There’s a heavy dose of suburban absurdity at play here, and “The Birthday Party” gets bonus points for its inclusion of the strikingly beautiful and talented Sheila Vand (A Girl Walks Home Alone at Night). “The Birthday Party” uses the short film format a bit better than “The Box” (see? I can’t help but compare the two), but the overall payoff was lukewarm.

Up next is perhaps the most successful chapter in XX, which is Roxanne Benjamin’s “Don’t Fall.” It’s not flashy, it’s not heavy on subtext—it’s just a bunch of stoned campers getting ripped apart by a demon. There’s a bit of Blair Witch at play—the demon takes over the timid body of Gretchen (Breeda Wool) when the campers stumble upon a series of ominous petroglyphs, and proceeds to turn their RV into an unholy abattoir of violence. “Don’t Fall” is a blood-drenched homage to pre-CGI creature features like Pumpkinhead and The Fly, resulting in a truly memorable short film.

The concluding film is Karyn Kusama’s “Her Only Living Son,” a story of familial dread that evokes films like The Omen. On the eve of her son Andy’s (Kyle Allen) 18th birthday, single mom Cora (Christina Kirk) starts to notice that something’s not quite right. Throughout the film, we learn that Andy’s a bit disturbed—he has a thing for ripping people’s fingernails off and nailing squirrels to trees. Oddly enough, the members of Cora’s community that we meet seem overly concerned with justifying Andy’s actions. It’s here when the allusions to Ira Levin’s horror classic Rosemary’s Baby start to jump out at the audience.

“Her Only Living Son” also suffers a bit by cramming a lot of substance into a short run time, but Kirk’s performance as a mother who refuses to acknowledge the darkness in her son makes the film’s culminating moments powerful to watch.

XX brings together a creative team of female filmmakers, and it’s great to see their work come to gruesome life. I’m anxiously awaiting the feature films that will realize their ambitious ideas. –Alex Springer