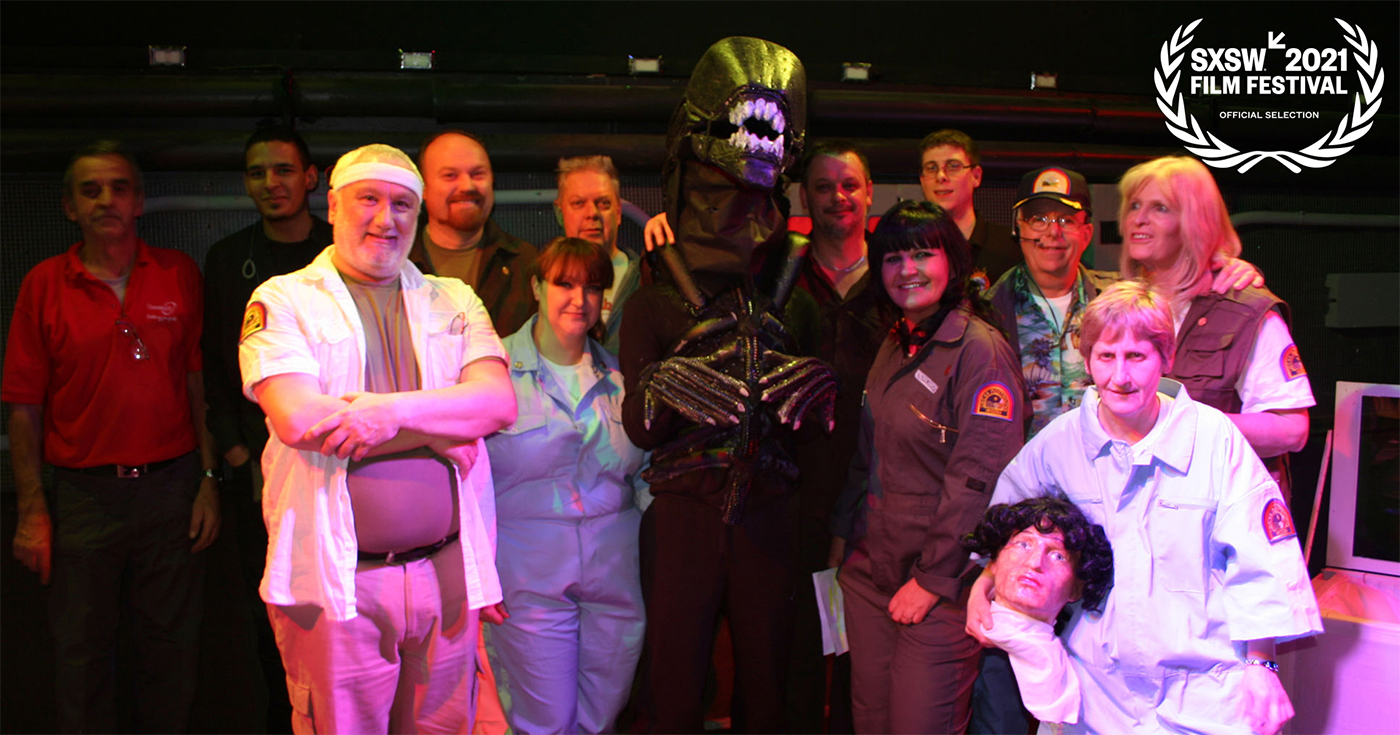 In space, no one can hear you forget your lines.

There are two films from the past 25 years that have made me laugh and filled me with a sense of pure, unfiltered joy in a way that nothing else can. Waiting For Guffman, which is Christopher Guest’s brilliant mockumentary about the making of community-theater premiere production, and Galaxy Quest, the hilarious and surprisingly touching love letter to Star Trek and the space operas of the ’60s–80s. If anyone were to tell me that they could be combined into one gloriously goofy and strangely inspiring film, I would have thought it was impossible, but directors Danielle Kummer and Lucy Harvey’s Alien on Stage: The Documentary have done exactly that, and it truly must be seen to be believed.

The Wilts and Dorset Bus Company in Dorset, England, has an Amatuer Dramatics group known as “Paranoid Dramatics.” Every year, they put on a show to raise money for charity. After years of doing musical pantomimes of Sleeping Beauty, Robin Hood, and the like, Luc—the budding, young screenwriter tasked with writing the latest production—wants to do something different. Something very, very different. He proposes doing a stage production of an iconic film, with a list of ideas that included Pulp Fiction and Tombstone. But the group settles on Alien, the 1979 sci fi horror classic from Ridley Scott. It’s the favorite film of Luc’s mother, Lydia, who showed it to him when he was 9 years old. But can Alien really be done as a play? It does, after all, take place all in one ship with a minimal number of set changes. How hard could it be?

Luc’s dad, Dave, is a day-shift manager who is former military and is known for approaching the yearly Am-Dram show with great intensity. He directs the production, which features Lydia herself in the role of Ripley. The cast comprises bus drivers and supervisors, including white-haired drivers Mike and John—who reminded me vaguely of Statler and Waldorf from The Muppets—playing the roles of Brett and Parker, played onscreen by Harry Dean Stanton and Yaphet Kotto, respectively; and Jason, who looks like a British Louis C.K., as Captain Dallas.

Pete, the night supervisor at the bus station who is in charge of props and special effects, researches Alien cosplay and comes up with some brilliantly crazy ideas. Lydia’s father, a retiree, builds an intricately detailed set based on watching the film “a couple of times.” The group spends a year preparing the production, only to have the performance at the Allendale Center in Wimborne, Dorset, be attended by an audience of only 20 people. It seems like the end for this oddball experiment, until something utterly unexpected happened: The company is invited to perform the show in London’s West End, at the Leicester Square Theatre.

Alien on Stage: The Documentary chronicles the strange, hilarious and often rousingly uplifting story from inception to the glorious opening night in the heart of London’s theater district. The endearing cast of characters may vary in their enthusiasm for the production, but everyone gives it what they’ve got to give. What makes it so richly satisfying is that while the original intention was certainly not to go for laughs, the plucky troupe takes being designated as a comedy in stride without ever making the mistake of killing it by trying to deliberately play it as such.

The fact that they embrace being laughed at makes us laugh with them in a way that’s filled with a grateful sense of respect for their efforts. Kummer and Harvey capture the joys, frustrations and ultimate triumph of this unlikely success story through extensive interviews, plenty of footage from behind the scenes and even of the one-of-a-kind production itself. The inspired musical score by Alex Shesha captures both the bizarre comedy and rollicking sense of adventure.

Alien on Stage: The Documentary is lightning in a bottle,and one of the most delightful, entertaining and unforgettable documentaries that I’ve ever seen. It’s a must-see for movie buffs and for anyone who enjoys a great story of the triumph of the underdog. It filled me with love for being inside a darkened theater of any kind—and at capacity, to boot. It’s likely to stand among my personal-favorite films of 2021, and I urge you—no, I implore you—to see it the minute you get the chance. – Patrick Gibbs