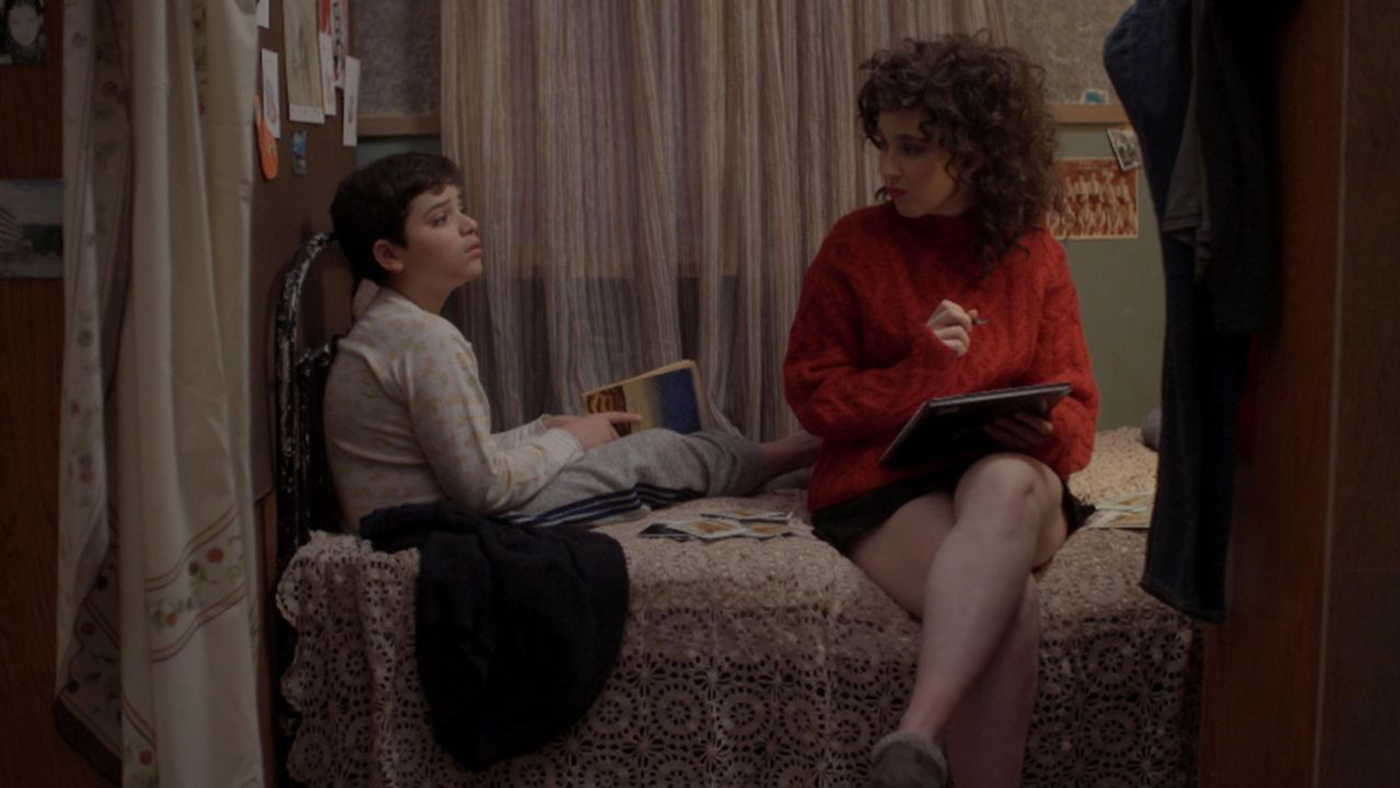 You are who you are no matter how hard you may try to bury it, and the only path to happiness is to be true to yourself. This is the beautiful theme of Wes Hurley’s heartfelt film Potato Dreams of America, a movie that is clearly personal to the filmmaker who made it. It’s a narrative-feature version of his previous work, Little Potato, which won the Grand Jury Award for documentary short at SXSW in 2017. Both films are based on Hurley’s life story, but I have to believe that it must’ve worked a lot better in the documentary than it does here. I’m not saying that because it’s a story that doesn’t lend itself to a narrative feature; I’m saying it mostly because of the simple fact that in a documentary, you don’t have to be able to work with actors.

Potato is the nickname given to a boy (Hersh Powers) growing up in the collapsing USSR, where he falls in love with American movies. His single mother, Lena (Sera Barbieri), is a medical doctor who tends to prisoners at the Gulag, working ruthlessly long hours under horrible conditions only to come home to be harangued from Potato’s grandmother. When the Iron Curtain falls, Russia changes overnight, and suddenly, Christianity flows into the country, and with it, antisemitism and homophobia. Potato, trying to understand this new normal, creates an imaginary friend version of Jesus (Jonathan Bennett, Mean Girls), who freeloads on the couch all day watching television. Potato also starts to feel stirrings that he doesn’t quite understand and hopes will go away.

When Lena finds an ad for mail-order brides, she starts corespondending with an American named John. It’s not long before she and Potato go off to live with him in Seattle, where they’re both recast with older actors: Tyler Bocock as a teenage Potato and Marya Sea Kaminski as a middle-aged Lena. In Seattle, they find that they are happy with the freedom of life in America but fearful of the whims of the ultrareligious John (Dan Lauria, The Wonder Years) and Potato must make a decision on how to deal with his increasing certainty of his sexuality and what coming out might mean for his relationship with his mother, with America and with God.

Potato Dreams in America is a story of a boy who grows up wanting to make films very badly. Here, Hurley gets his wish, as legit feature films don’t get made much more badly than this one. The acting can be most charitably described as inconsistent. In the first section, focusing on young Potato in Russia, I’m not even sure that it’s fair to say that it’s community-theater level because the fact is that there are some community theaters out there doing some pretty solid work. The style of this section of the film is so stagey and artificial that, in fairness, I can’t say for certain that Hurley isn’t deliberately trying to get bad performances from his cast as some sort of offbeat, failed artistic choice.

It’s downright painful to watch, a cringe-inducing attempt at making something that’s somewhere between A Christmas Story and Jojo Rabbit—I never thought I’d see a Jesus that made me think, “He’s just a pale imitation of Hitler”—and there’s a weird kitchiness to it that vaguely feels like a John Waters movie made in the backyard. The acting does gets substantially better once we reach America, and Lauria is genuinely good in an intriguing role. I also thought the choice of playing Russia without any accents, only to make the American versions of Potato and Lena heavily accented, was an interesting one that could have really worked if the section of the movie set in the USSR was even marginally well-done.

The story here has all the elements to be sweet and compelling, and honestly, I really wish that Hurley had collaborated with a more experienced screenwriter and left the directing duties to someone else—frankly, almost anyone else, as the director he ultimately ends up channeling is Ed Wood. There’s a good version of this movie to be made, minus Jesus, and it brings me no pleasure to say that Hurley’s love of film doesn’t translate to showing an aptitude for it, and the unmitigated failure here rests squarely on his head. Potato Dreams of America is largely one bad choice after another, and while the theme of religious confusion leads to some of the most interesting moments, all I know is that I audibly thanked God when the movie was finally over. –Patrick Gibbs