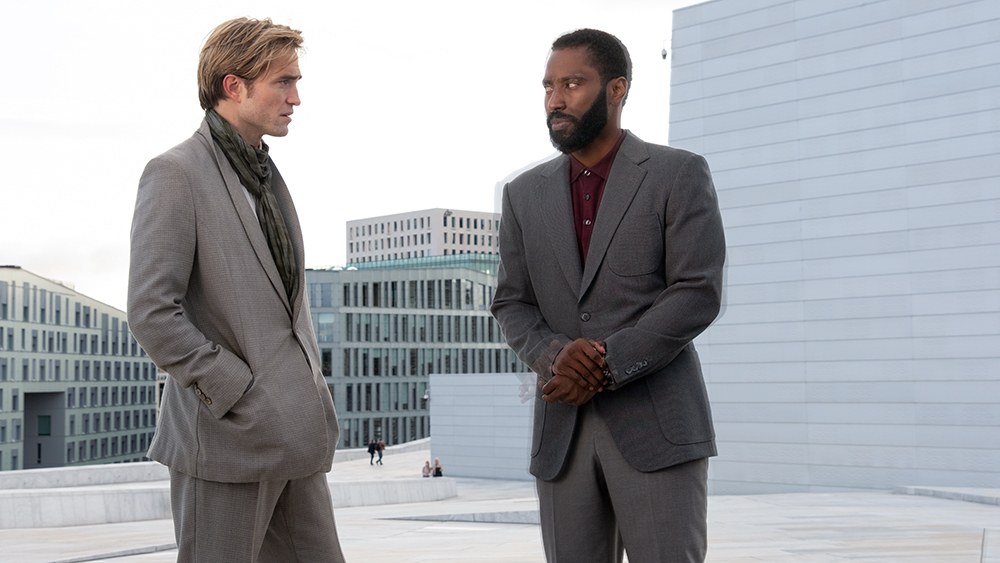 We are still months away from a COVID-19 vaccine by the most optimistic estimates, but Hollywood’s hopes of a box-office booster shot are resting on the release of Christopher Nolan’s insanely overhyped and overburdened spy thriller, Tenet.

The writer/director’s films tend to be shrouded in secrecy, and they build up an ultra-high level of anticipation. While that worked to his advantage with Inception ten years ago, it has more mixed results with both The Dark Knight Rises and Interstellar, both terrific films that were so heralded as classics before anyone had even seen them that when people finally did, general audiences felt oddly obliged to pick them apart. But with Tenet, the circumstances have raised it to a mythical status, and the pressure to deliver is extreme, to say the least.

The film opens with a CIA agent (John David Washington, Blackkklansman) participating in an undercover SWAT operation at a Ukranian opera house. He rescues an exposed spy and steals a strange artifact, but also gets captured along the way. He is tortured, and rather than give up any secrets, he takes a cyanide capsule. But he awakens to discover that the pill was a fake, his colleagues are dead, the artifact was taken … and that the mission was only a test.

The agent (whom we only ever know as “The Protagonist”), is pointed toward a secret organization called “Tenet,” where he meets a scientist studying bullets whose entropy has been inverted so they move backwards through time. The Protagonist follows the trail to Mumbai, where he meets with local operative Neil (Robert Pattinson) and learns that the bullets are being inverted by a Russian arms dealer named Andre Sator (Kenneth Branagh), who is communicating with the future, and planning something big.

Tenet is big, ambitious and loud, with the emphasis on loud—theaters are already offering ear plugs to guests, though it is recommended that you bring your own so you can color-coordinate them to your mask. The ear plugs will do nothing, however, to help you separate the pounding bass of the soundtrack from the complicated psuedoscience explained in dialogue that you can’t hear because Nolan is, apparently, a moody teen who refuses to turn down his stereo. It’s a huge problem, as without being able to hear the dialogue, there is no hope of following just what the hell is happening on screen.

The film is overlong by a full half hour, and short on character development, though the latter is a deliberate choice as Tenet is plot- and concept-driven and highly dependent on surprises. And when things start coming together, there really is a lot to love, and plenty of fun to be had here.

Gene Siskel once emphatically stated that he wanted to see Denzel Washington play James Bond, and that’s basically what we are getting here, with the acting legend’s charismatic son tearing things up as a superspy. (Though truthfully, he reminded me more of Ethan Hunt.) Meanwhile, it’s a great chance for people who don’t see indie dramas to discover that they actually do like Pattinson, and Elizabeth Debicki is a nice presence as Sator’s wife. Branagh is good, but we’ve already seen him play this same character in Jack Ryan: Shadow Recruit.

Tenet is a smart popcorn film that doesn’t rank among Nolan’s best, but it would be more than enough to satisfy audiences without the enormous obstacles of the sound issue, which is one of the director’s recurring problems that reaches simply intolerable levels here. Add to this the fact that it’s just not worth braving a crowded theater at the present time. Yes, the IMAX is eye popping, and this is a highly cinematic film, but to be perfectly blunt, those factors are outweighed not just by safety concerns but the intense desire to turn on the captioning so you can understand the dialogue.

In many ways, Tenet is distinctly a Nolan film, and fans will eat it up. But as a fan myself, I want to see someone reign him in a little next time and put their foot down about the sound mixing, and in general, I feel that the auteur’s autonomy and ego need to be put in check. That being said, once the action gets going fast and furious, there’s simply too much blockbuster here not to enjoy, and it’s inventive and pulse pounding in an Alfred Hitchcock–meets–The Matrix kind of way.

I liked Tenet, but it was a lot of what I love about Nolan fighting with what I hate, and it’s a dizzying experience. On the whole, the good outweighs the bad. Do I think it’s worth risking your health over? Frankly, there are better films that would give me pause on that question. But as a cinema junkie, I sympathize, and while I saw it under extremely controlled circumstances at an exclusive screening, I can’t deny it was good to be in a theater again.

But for the sake of your health, and others—like my immunocompromised twin brother who is a devoted fan and will probably have to wait for video to see this one—please, I beg you, be responsible and wear your mask. It’s what Batman would do. –Patrick Gibbs