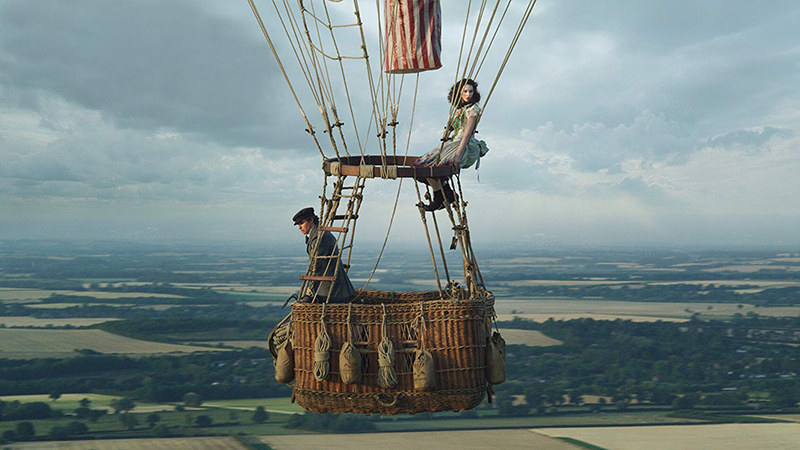 If anyone out there needs a reminder that the phrase “based on a true story” should be taken with a grain of salt when watching a major Hollywood release, The Aeronauts is here.

In 1862, the visionary meteorologist James Glaisher (Eddie Redmayne) enlisted the aid of daredevil, balloon pilot Amelia Rennes (Felicity Jones) in order to learn more about predicting weather patterns by flying higher than anyone in history. The journey is thrilling but perilous, and the pairs’ descent becomes a fight for survival.

The liberties taken by director Tom Harper in this account of Glaisher’s real life voyage makes the film closer to historical fiction than anything. Amelia Rennes (who is really the lead character here) is entirely made up, as is her dramatic backstory, although she is loosely based on several different real people, none of whom had anything to do with this particular voyage. Frankly, as this sort of playing fast and loose with facts goes, I will take The Aeronauts over The Greatest Showman any day—call me uptight, but singing, dancing and feel-good messages based around a slave owner who famously exploited and mistreated people and animals just doesn’t sit well with me. However, the fabricated elements in The Aeronauts are problematic, and it partially explains the vague and sloppy approach to developing the characters.

The good news is that both Redmayne, and (especially) Jones are so likable and have so much chemistry that you become easily invested in James’ and Amelia’s flight (this is actors’ second big screen pairing, following The Theory of Everything)—whenever they are in the air, it is a breathtaking ride. The flashback sequences on the ground are more hit and miss and often feel as if they are just there to pad the film out to feature length—they don’t give us nearly enough insight into how or why the characters became the people they are. The film was shot with the intention of an IMAX release and is meant to be an eye-popping adventure. It is unfortunate, however, that Amazon Studios made the choice to put the film out at such a competitive time and give it a very short theatrical run. It is clearly meant to be a large format experience.

Despite its shortcomings, there’s nothing else out there quite like The Aeronauts, and when it comes to pure excitement and daring exploits with a touch of feminism, the movie is an absolute joy. –Patrick Gibbs