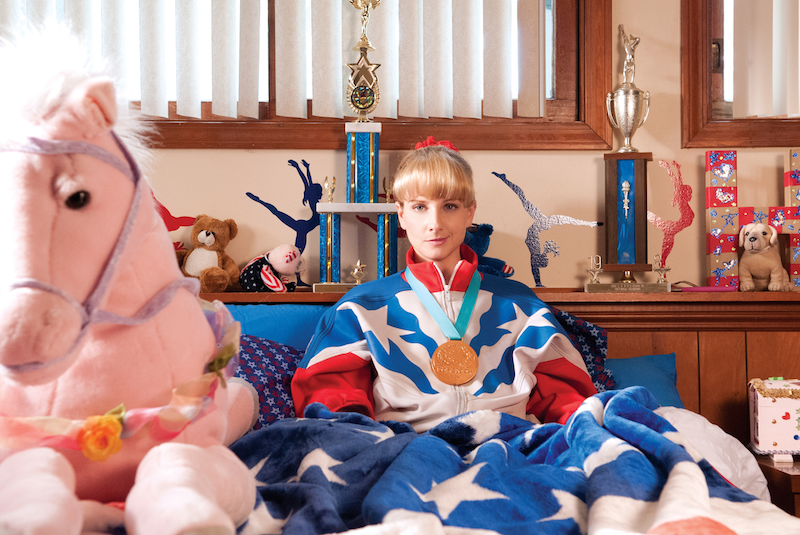 If you’ve ever wondered what the world would be like if Olympic champion gymnast Mary Lou Retton returned to her hometown of Fairmont, West Virginia, and acted like an egotistical maniac for years after her career was finished, then director Bryan Buckley and married writing team Melissa and Winston Rauch have the filthy dark comedy you’ve been craving. Gymnast Hope Annabelle Greggory (Melissa) believes that her hometown of Amherst, Ohio, still owes her everything after winning the bronze medal in Rome. She’s broke, rude and crude, and treats everyone like a used toilet seat. But things change when Hope’s former coach unexpectedly commits suicide and leaves a will stipulating that Hope could receive $500 million so as long as she sets her ego aside and trains the town’s up-and-coming gymnastics star, Maggie Townsend (Haley Lu Richardson). Team Rauch offers an explicitly lewd comedy that lets the Big Bang Theory star off the FCC regulation chain and shine as a fearless female comedian lead, which, sadly, does not happen as often as it should in modern-day cinema. Actor Gary Cole lends his skills as Hope’s adoring father who’s growing tired of his daughter’s disgusting behavior. With dialogue that would make a sailor blush and a sex scene that will burn hysterically disturbing imagery in your mind for life, you will never look at the sport of gymnastics in the same light ever again! –Jimmy Martin