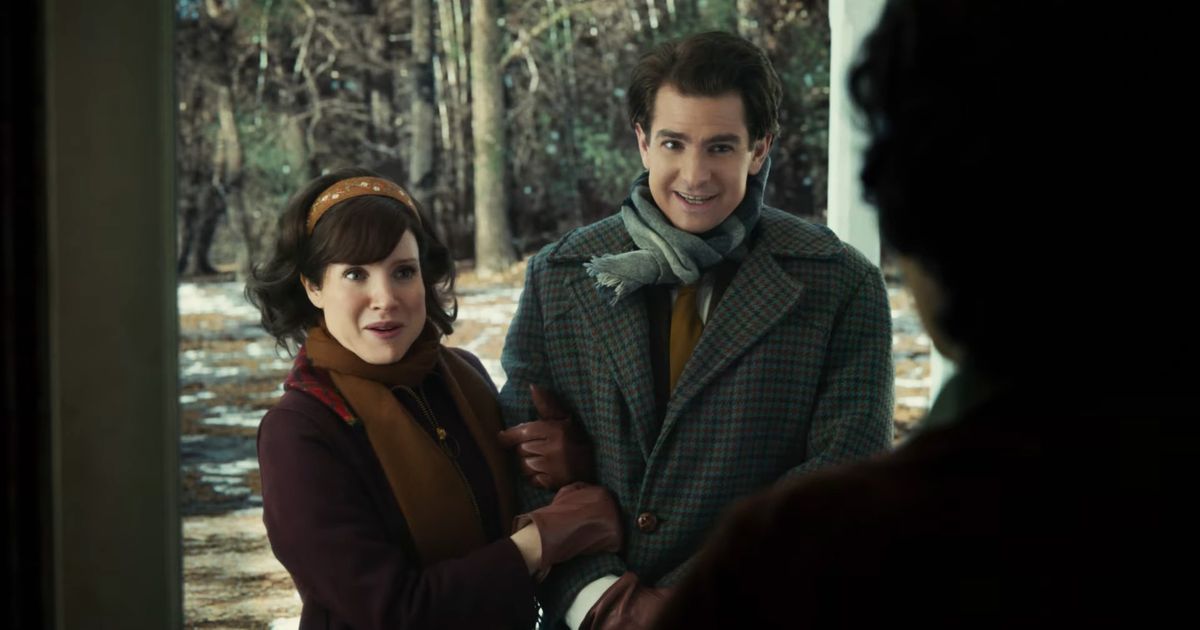 There are few figures from popular culture who represent America in the ’80s better than Tammy Faye Bakker. The subject of this new film, The Eyes of Tammy Faye, Faye Bakker is synonymous with glitz and glamour, big hair, heavy makeup and an unapologetic pursuit of wealth, all in the name of America and Jesus.

The Eyes of Tammy Faye stars Jessica Chastain (Zero Dark Thirty, Molly’s Game) as half of the most glamorous televangelist duo ever. In the 1970s and ’80s, Tammy Faye and her husband, Jim Bakker (Andrew Garfield, The Social Network, Hacksaw Ridge), rose from humble beginnings to create the world’s largest religious broadcasting network and theme park, and were revered for their message of love, acceptance and prosperity. Tammy Faye especially was legendary for her indelible eyelashes, her idiosyncratic singing and her eagerness to embrace people from all walks of life. However, it wasn’t long before addiction, financial improprieties, scheming rivals and scandal after scandal toppled their carefully constructed empire.

Director Michael Showalter (The Big Sick, The Lovebirds) approaches the material with a sense of gusto, adapting from the 20-year-old documentary of the same title. While Showalter keeps things moving and I was entertained throughout, I felt like merely a spectator. What is sold as an intimate portrait stays comfortably and predictably on the surface most of the time, occasionally getting its toes wet but never taking the deep plunge that I was hoping to see.

Chastain gives a transformative and spectacular performance; it’s almost certain to win her an Oscar nomination, which is, more than anything else, what this movie seeks to do. Garfield is almost as good—his scheming, greed-fueled yet undeniably charming Jim is the most interesting character in the film. That said, we never get more than a few cursory glimpses of the real person in there.

The film is called The Eyes of Tammy Faye, and everything is seen through those eyes. It would have us believe that in many ways, she didn’t really know her husband, who kept her at a distance. This is likely the truth to a certain extent, but it’s sympathetic toward Faye to the point that it comes close to absolving her of any real wrongdoing in the scheme to raise millions in name of God’s glory while building up the Bakker kingdom, and that’s a pill that I found a bit hard to swallow at times.

What’s certain is that there was a lot of willful self-delusion going on for a lot of people in the Bakkers’ orbit, as is almost invariably the case when religious fervor lines up so perfectly with the answers we want to be hearing. The Eyes of Tammy Faye is at its best in the moments where it captures the truth. I appreciated that Showalter and screenwriter Abe Sylvia (Dead to Me) were committed to making something more than a hit job, but every time it feels like we’re going to get to see something really good—such as the moment when Tammy Faye hears people cracking jokes about her makeup for the first time or some insight into the way the Republican party became dependent on the support of such personalities—we suddenly move on to something else before there’s a chance at exploration. It all ends up feeling like a tease.

Cherry Jones (24, Transparent) is great as Tammy Faye’s literally God-fearing mother, Rachel, as is Vincent D’Onofrio (Men in Black, Daredevil) as Rev. Jerry Falwell. But it’s all done with such a “greatest hits” approach that only those who already know a little about the Faye Bakker’s or the PTL (Praise the Lord) Television Network story are likely to feel they’ve gotten much out of it. The Eyes of Tammy Faye is entertaining and effectively sad. For a film about people who profess to be instruments of God’s divine hand, however, there is surprisingly little revelation on display. But Chastain’s divine performance is still enough for a moderate recommendation. –Patrick Gibbs