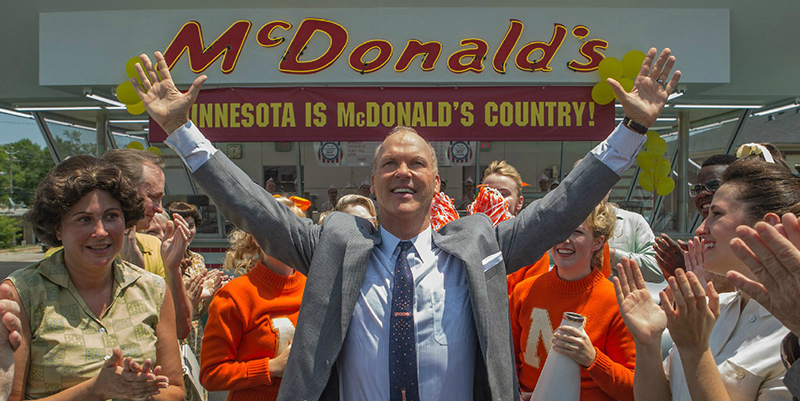 The Weinstein Company
In theaters: 01.20

Wherever you’re reading this review, I can almost guarantee you that there’s a McDonald’s restaurant within a mile of your location. Those places are everywhere. However, the origin of this billion-dollar tycoon corporation is even darker than many would imagine. While Ray Kroc (Michael Keaton) may don the walls of every establishment, he was not actually the creator of the enterprise nor the name. Mac (John Carroll Lynch) and Dick (Nick Offerman) McDonald actually started the first restaurant in San Bernardino, California, and like a wolf in sheep’s clothing, Kroc sank his teeth into their trusting, small-town, gullible attitudes. While the acting from the entire cast works together, an actual documentary may have been the more appropriate approach for this story. Many scenes become far too repetitive, to the point where many drinking games may arise. Every time someone hangs the phone up on someone, take a drink. Every time someone signs a contract, take a drink. Every time Laura Dern sits in the shadows with a sourpuss face, take a drink. The most shocking lesson learned in this revelation, if true, is just how cruel of an individual Kroc could be to his fellow human beings. It’s truly hard to believe that someone could not only steal millions of dollars from the creators, but also strip them of their family name from their own restaurant. At the end of the film, you feel incredibly sad for the McDonald brothers but also question how a pair of businessmen could be so incompetent with their decision-making process. In sum, the execution is generally well-done, but many scenes feel like a paint-by-numbers, made-for-television movie. If the film delivers one thing perfectly, it’s that you will never look at that golden sign in the same light ever again. –Jimmy Martin