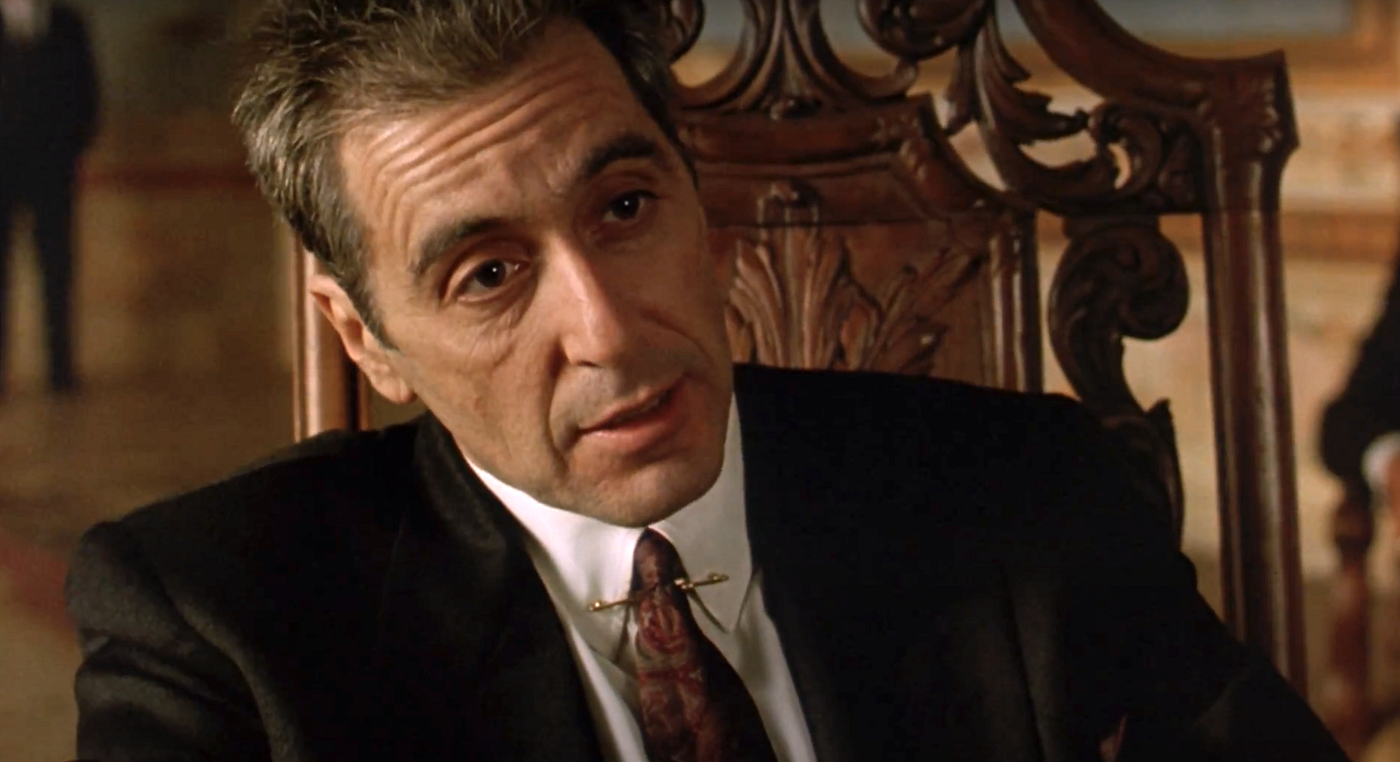 Film Review: The Godfather Coda: The Death of Michael Corleone

American Zoetrope
In Theaters, on Streaming and Disc: 12.08

Sofia Coppola must be thinking, “Just when I think I’m out, they pull me back in!”

It was 30 years ago this Christmas that critics and audiences first unwrapped The Godfather Part III and collectively asked if anyone saved the receipt. It’s a movie that gets better on a second viewing, but so is Waterworld. When you go in with greatly lowered expectations and brace yourself for the most cringe-inducing moments, you find that something you thought was terrible is actually just really not great.

The Godfather Coda: The Death of Michael Corleone is the title that director Francis Ford Coppola originally intended, and his new presentation of the film is a remarkable achievement in getting people worked up to be brutally disappointed by the same movie twice.

The year is 1979, and Michael Corleone (Al Pacino) isn’t getting any younger. More, he finds that being the head of the Corleone crime family—a job he never wanted—isn’t getting any easier. He has just brokered a huge deal with Archbishop Gilday (Donal Donnelly) to help the Catholic church with some debts, and he is now trying to go legit. But a very powerful mafioso, Don Antibello (Eli Wallach), isn’t eager to let such a powerful and wealthy family just  slip away from Cosa Nostra. Complicating matters even further is Michael’s illegitimate nephew, Vincent Mancini (Andy Garcia), who not only wants a piece of the family’s criminal empire, but of Michael’s daughter, Mary (Sofia Coppola). Schemings and machinations within the mob and the church prove the old adage, “You can fool some of the Papal some of the time … ” to still be true, and Michael must try to preserve the family legacy while hopefully finding personal redemption.

This updated version is touted as having a new opening and a new ending, though “slightly fiddled-with opening and ending” would be more accurate. But there’s a lot about the original film that actually did work: There’s an overtly Shakespearean quality to the story that really appeals to me, Pacino’s performance is a huge treat, and I’ve always felt that Talia Shire, the too-often overlooked Corleone and Coppola, has some really nice moments. Garcia smolders in his Oscar-nominated role, except for when he’s tasked with the enormous burden of trying to make a less-than-convincing love story work opposite a partner that simply can’t act.

As a big fan of Sofia Coppola the director—if you have AppleTV+, you need to watch On The Rocks—but while some may look on more kindly because of her evolution into a great director, the failure was never hers. Having never aspired to being an actress, it was and still is her father’s failure for putting her in this crucial role. The new version of the film is almost 12 minutes shorter, and he does trim down some of her scenes, but he leaves the most infamous one—the one that the Gilmore Girls watch over and over—completely intact. It’s a crucial moment, and I wasn’t expecting it to be gone completely, but some judicious editing could have dulled the blunt force trauma of just how laughably bad it is. Mary is meant to be a classic tragic character in the vein of Ophelia or Cordelia, and the unfortunate fact is that the enormous drag factor of the performance will forever bring down the film.

The prospect of a “new ending” tantalized me with the idea of not only fixing that scene, but also the groan-inducing shot of Michael as an “old man” putting on a hat to partially conceal the thrift-store-clearance-sale gray Halloween mad scientist wig. While I understand that the director’s intent was to recut the movie the way he wanted without shooting anything new, and that the prospect of shooting anything without the cinematographer (the late, great Gordon Willis), may have been distasteful, I just can’t accept the idea that hundreds of millions are being spent on an even more expensive and very likely no better—quite probably even worse—new cut of Justice League, but we can’t get just one little insert close-up of Pacino at his current age to properly put a button on one of the greatest cinematic sagas of all time.

To summarize, the bad news is that The Godfather Coda: The Death of Michael Corleone doesn’t succeed in turning The Godfather, Part III into a great film—that can’t possibly be done with only the existing footage. The good news is that it was never a truly terrible one in the first place, just a disappointing one. It’s one of many not-entirely-satisfying threequels that have been made, and whichever version you prefer, it’s a part of movie history and we don’t need to pretend it never happened. – Patrick Gibbs