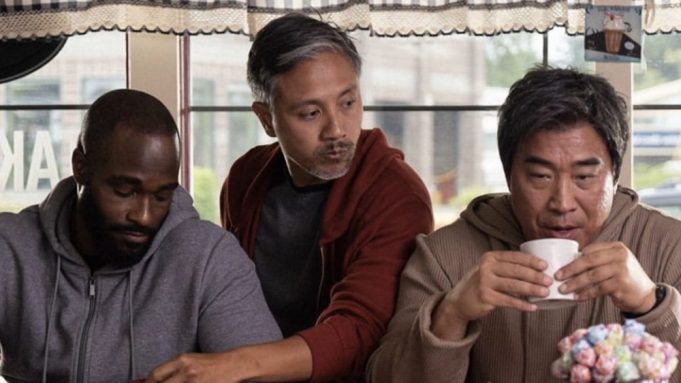 Photo courtesy of Beimo Films and Persistence of Vision Films.

Beimo Films and Persistence of Vision Films
In Theaters and Video on Demand 5.7

If you love Cobra Kai as much as I do, you’re already really hungry for Season 3. and The Papers Tigers, the debut feature from writer-director Quoc Bao Tran, is a delicious, if not very filling snack to help tide you over.

The Paper Tigers tell the story of three martial arts prodigies, two Asian Americans and one African American, who have grown up into middle-aged men who are one kick away from pulling their hamstrings. There’s Hing (Ron Yuan, Mulan, Ella Enchanted), the enthusiastic but tubby heart of the Tigers and a student of Eastern medicine; Jim (Mykel Shannon Jenkins, The Bold and the Beautiful, Undisputed III: Redemption), the only member of the group who is still active in the fight game; and Danny (Alain Uy, The Morning Show), the best of the best, who used to be known as “Danny Eight Hands” because of his speed and ability to block any blow before it reached him.

The Tigers spent their youth under the tutelage of Sifu Cheung (Roger Yuan, Shanghai Noon, Crouching Tiger, Hidden Dragon: The Sword of Destiny), a cook at a Chinese restaurant who was a legendary kung fu master. All went their separate ways after a falling-out over a trip to Japan to compete professionally. But when Sifu dies of unexplained heart attack, Hing suspects foul play, and they must reunite, juggling dead-end jobs, dad duties and old grudges to set things right and restore honor to their names.

The Paper Tigers is light, silly, and made on a meager budget, but it’s also made with love. Tran clearly cares about the movie he’s making, and he’s injected it with a lot of heart and some memorable character interaction. The titular trio is terrific, and I had a hard time getting over the fact that Uy’s filmography is so small—he has such a dynamic star presence. Ron Yuan as Hing may be one of the most likable performances I’ve seen this year, and the chemistry between them is genuine.

The plotting is cliched and, at times, bordering on nonsensical, and The Paper Tigers is much the kind of little film where you have to just roll with it and make a decision as to whether you’re going to write it off due to its shortcomings or embrace the considerable charms of the many elements that do work. The fight choreography is far better than anything in Mortal Kombat, and while the characterizations are broad and simplistic, I found myself caring about each of these guys from the moment that they came onscreen. They really make you believe the history between them. The one-hour, 48-minute runtime has a few draggy moments, most of them involving an oafish old rival played by Matthew Page (Enter the Dojo, Odd Thomas), but when it’s in its groove, the movie moves pretty briskly.

The Paper Tigers is a disposable movie that is more likely to be a video rental than a theatrical experience, but it’s fun and engaging. If it were a franchise, I’d look forward to more just to see the characters again. It may not be great art or even classic action, but it never takes itself too seriously, and there are plenty of worse ways to kill a couple of hours. The level of enthusiasm coming from behind the camera and onscreen is infectious enough to make The Paper Tigers a worthwhile experience that I found to be well worth my time. –Patrick Gibbs