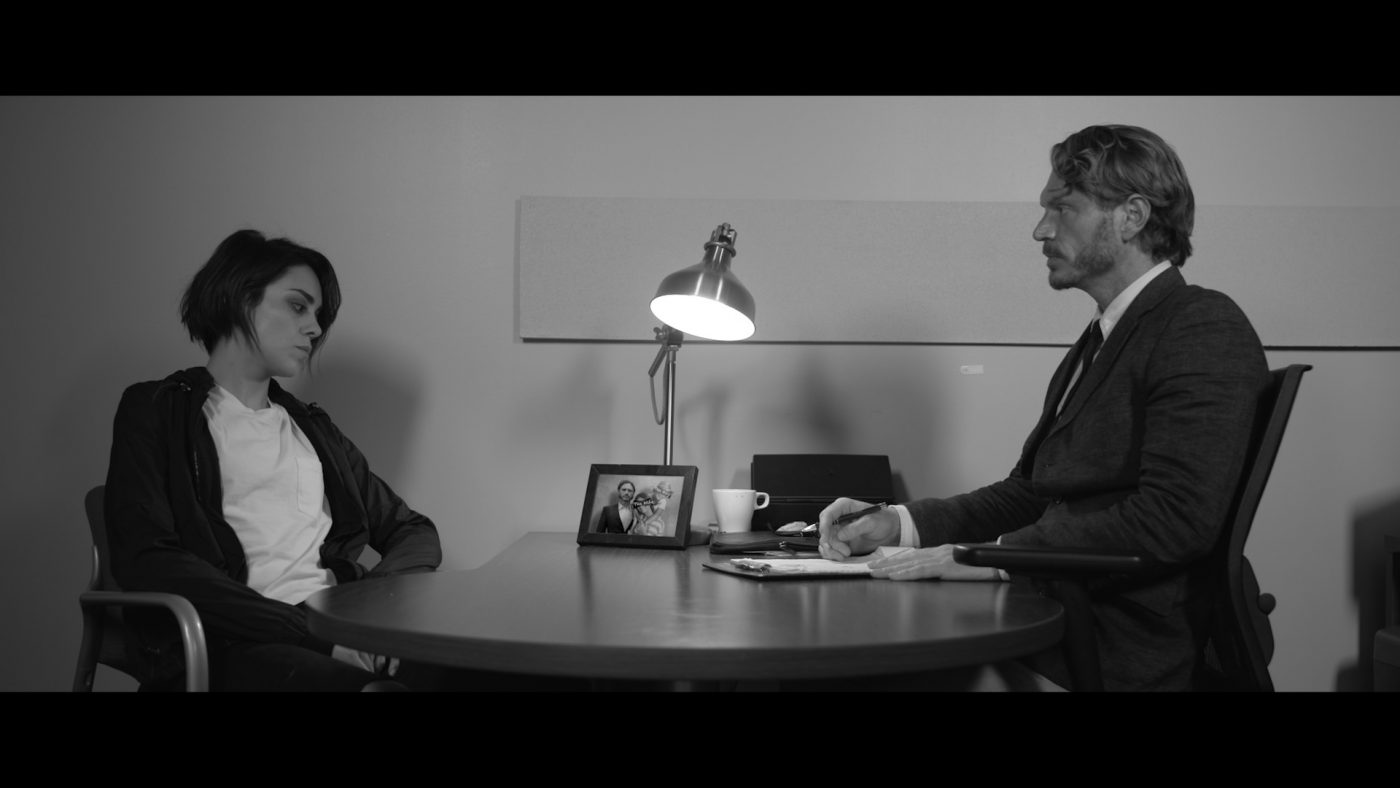 Speaking from experience, therapy can be intimidating. You open up about your deepest fears and your most prominent traumas to someone who—in the beginning—is a stranger to you. It requires vulnerability. The Parker Sessions, written and directed by Stephen Simmons, takes the vulnerability of therapy and turns it on its head to create a unique psychological horror experience.

The story is told in four acts separated by black-outs and title cards. In those four acts we meet Robert (Danny James), a therapist with hard emotional boundaries, and Parker (Rachell Sean), his latest patient who has boundaries and secrets of her own. The whole film is presented in a high-contrast black and white. This was probably done for easier lighting, but just as likely for the comparisons to the psychological horrors of the 1960s. I’m happy to say it worked! The coloring of the movie adds something special. The warm grey tone left me stunned several times, particularly during Parker’s trip to the fair. Usually the appeal of a fair is the bright lights, the sounds and the whizzing colors. To see a fair presented with dull sound and in black and white was something fresh that I don’t think I’d seen before.

In the first act, the audience quickly grasps Parker’s character. Her initial conversation with Robert is littered with brief cutaways to her life outside the session. Parker lies to Robert multiple times throughout the first act as we see her true actions range mildly interesting to shockingly devious. Robert asks if she “uses dope.” Parker scoffs at his suggestion, then the film cuts to her doing a line of cocaine in a bathroom. We see the traumas of her youth and the makings of our protagonist, who seems an antagonist to everyone else around her. The cutaways featured some of my favorite shots in the piece, including a smooth truck shot alongside Parker as she sings in the car and winks at the camera. Another stand-out sequence was Parker’s memory of an intruder when she was a young girl; the way the man was framed at the top of the stairs was a great composition. The sequences in the cutaways keyed us into Parker as a person: She’s an unreliable narrator and isn’t being open with Robert. It’s a good set-up, as her unreliability isn’t truly paid off until a later act.

It’s easy to see what Simmons was going for with the acts. Each act has a title referring to the events within, almost like chapters. Each chapter has a different event However, I found the acts to be wildly inconsistent in their function. Act two retreads a lot of the ambiguity from act one (that I hoped would remain ambiguous), but doesn’t explain any of it or further the story, either. It seemed to serve as a break between acts one and three so that we’d feel time had passed. By the time act three was over, I had mostly forgotten the imagery of act two. Act one was our set-up, act three changed the story and raised the stakes, and act four was our resolution. If act two’s goal was to scare me, it certainly had its moments, but overall it didn’t work structure-wise.

Sean is excellent in the role, simultaneously playful and pained in her portrayal of Parker. James decent job of playing off of Sean as Robert but is overshadowed in almost every scene they share. His role does get more interesting in act three as does his performance. His dry, no-nonsense therapist with an absence of emotional availability suddenly changes from irritating to understandable. Once it’s revealed why Robert portrayed this way, the hard, uninteresting shell falls away and we are left with the pieces beneath. James sticks the landing on that change fairly well. He’s given more to do and it’s nice seeing that shift for him and his ability.

That being said, neither character ever feels like a real person. The performances are good, but the dialogue leaves one wanting. Parker is snarky in her replies to Robert in a way that feels disingenuous. Both characterizations feel forced for the first half of the film. But I wouldn’t say that’s a full negative point to the film, either. After all, this is an experimental horror film as well as a kind of character study.

On the horror side of things, Parker’s traumatic nightmares haunt her both in and out of dreamworld. As the story unfolds, Simmons shows no mercy in letting us see these nightmares in all their gruesome nature. The scares themselves are executed well, with the imagery and shot composition doing a lot of the heavy lifting. The script has some gems, too, but the best parts of the film are visual. The experimental cutaways and flashbacks of act one give the film a dream-like quality that is dampened over time as the plot continues to unravel.

The Parker Sessions is an interesting concept that works most of the time, mainly due to its visuals, cinematography and a strong performance by Rachell Sean. It’s got a moody, edgy atmosphere that occasionally steps into corniness but otherwise functions as a memorable psychological horror film full of dread. –Max Bennion