00:00 / 20:24
Spotify Stitcher
RSS Feed
Share
Link
Embed
There is one voice everyone knows, one laugh more distinguishable than that of any other animated character: SpongeBob Squarepants’. Paramount films and Nickelodeon released The SpongeBob Movie: Sponge Out of Water on Feb. 6, 2015. The movie begins with a typical day in Bikini Bottom: utopic, with Krabby Patties crackling on the grill.

Tom Kenny: The Voice of SpongeBob is No Square 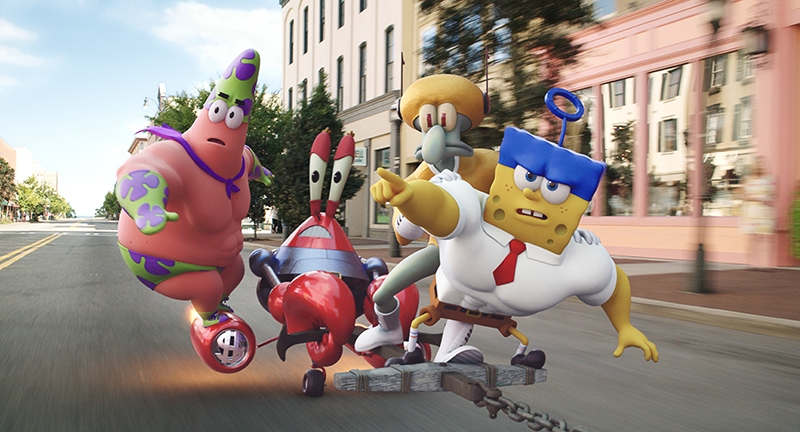 SpongeBob is one of cartoon history’s most enduring icons, but the voice behind the character is just as renowned—and more prolific than you’d think!
There is one voice everyone knows, one laugh more distinguishable than that of any other animated character: SpongeBob Squarepants’. Paramount films and Nickelodeon released the Blu-ray edition of The SpongeBob Movie: Sponge Out of Water on June 2, 2015. The movie begins with a typical day in Bikini Bottom: utopic, with Krabby Patties crackling on the grill. Disaster and withdrawal strike SpongeBob (Tom Kenny) and his friends Patrick (Bill Fagerbakke), Squidward (Rodger Bumpass), Mr. Krabs (Clancy Brown) and Sandy (Carolyn Lawrence) when the secret formula disappears. Bikini Bottom goes full apocalypse, engulfed in hangry flames. It is up to SpongeBob and Plankton (Mr. Lawrence), ironically, to team up against the infamous burger-flipping Burger Beard (Antonio Banderas).
In an interview with Tom Kenny, the voice of SpongeBob, Kenny describes the new film as an episodic adventure, or “disconnected comedy bits” that contribute to the same through line. “We approached it with scenes you could watch out of context, and it would be a funny three-minute [clip] and when you string them together, hopefully it makes sense,” says Kenny. Children, however, aren’t the only ones laughing. SpongeBob attracts more than the kids, and “kind of by mistake,” says Kenny. “It’s a kids’ show that us, the people who created it, laugh at, and the same thing is happening with the movie. I love how loopy and bizarre it is.”
Sponge Out Of Water is layered with humor for every age, which is part of what makes the film so successful: “I have friends with kids who were sending me pictures of sold-out midnight shows on opening weekend,” says Kenny, who then expressed the satisfaction in out-selling American Sniper opening weekend. “We did better than Paramount, Nickelodeon and Tom Kenny ever thought.”
Referring to himself in third person affirms his love for animation, which allows Kenny to “get paid to jump around in front of a microphone and be a goofball for all these years,” as Kenny puts it. His career began with stand-up comedy and sketch comedy during his 20s, but voice-over was what he always wanted to do. Kenny questions the sanity of people who want to be on film and in sitcoms. “I’m trying to tunnel out of the prison [they] are trying to tunnel into,” says Kenny. He describes voice-acting as timeless and ageless, something he could do until he dies of old age—“In the earlier years, under wigs and beards, that’s where I was the happiest: being unrecognizable,” he says. “Voice-acting is that times the nth degree. You can play any character you can sound like as long as you are easy to work with and are versatile. For me, it represents a huge freedom—being freed from your body and your age and your gender.” Whether Kenny plays kids, women, monsters or robots, he fills their roles, and fills our hearts.
Kenny is pretty much the voice of our childhood. He has played roles in The Fairly Oddparents, Scooby-Doo, The Wild Thornberrys, Winnie The Pooh, CatDog, The Green Lantern, Power Puff Girls, Adventure Time and many more. Kenny is an audition junkie—he does an audition almost every day, whether it is for a role on a T.V. show, commercial or a movie. Kenny has a long resume of acting, but his optimism is no act. “They throw some voices out that they are thinking about, like ‘Stephen Colbert meets Cookie Monster,’ and you just give it your best shot and hope you’re the one they pick—sometimes you are the one they pick, and sometimes you’re not.”
Kenny prefers to be out of the limelight and cannot believe his existing fanbase. He recently attended Dallas Comic Con and spent all day greeting a continuous line of people who waited up to eight hours between 10 a.m. and 7 p.m. to meet him. Voice-acting is like a dream—“I still wake up sweating, thinking I have to get to an office,” he says. Kenny hasn’t had a day job since about 1985, but he is no walk-on player, and he is definitely no square. “Do your due diligence,” Kenny says. “Read your scripts and storyboards ahead of time so they don’t have to take the extra time to explain. Knock on wood, but I think that’s why I have been lucky to work so much and to have the IMDb that I do. It’s hard work.”
Looking at Kenny’s IMDb, it’s no secret that he’s done his due diligence. The SpongeBob Movie: Sponge Out of Water hit the streets on June 2. See SpongeBob and Tom Kenny as you’ve never seen them before: a little kookier, a little crazier, and Seven Seas funnier. Make sure to pick up a copy and check out Kenny and the Krabby Krew’s newest masterpiece.
Check out our June Movie Reviews and June DVD Reviews for more info on new and radical movie releases!
Photos: