This premier screening of Soviet film The Needle, starring Victor Tsoi of Leningrad-based underground band Kino, is followed with a performance by the band.

The premier screening of Soviet film The Needle, starring Victor Tsoi of the Leningrad-based underground band Kino: The film is about Moro (Tsoi) who goes out of town, only to find on his return home that his girlfriend is strung out on morphine. The story conveys a sympathetic view of watching someone you love degenerate because of a substance and the trials of being involved in trying to help a junkie kick. 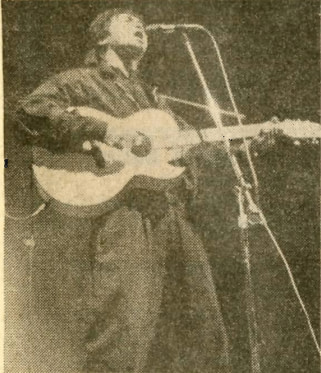 After the screening, Victor Tsoi (vocals & guitar) and Yuri Kasparyan (guitar) performed a few of their Kino songs (four, to be exact). Their style is hard to put a finger on, partly because only two of the five band members were here in the states to play this special show. The closest I can come would be to say they sounded like early ‘80s new-wave with a touch of Russian folk.

The significance of this evening’s screening and post-show performance are one. Never before has a Soviet film been made that admits to a drug problem in the USSR. — To make such a film means that the government approved it, and that it passed regulations imposed on filmmakers (or any other artists) by the Ministry of Culture. Whether or not the quality of the film itself was good is irrelevant. The message being sent to audiences who see it is that Glasnost (openness) is finally portraying the realities of drug abuse and drug pushing mafiosos in the Soviet Union.

Similarly, the post-show performances by ⅖ of Kino is worthy of notice. To be an underground band in Russia means to be unofficial, they have nowhere to play or record and are constantly harassed by the police. If there is too much trouble, it could mean losing jobs and membership to Youth Party Organizations—thus, being condemned to a life as a night watchman. The only hope is to cut a deal with the authorities in return for equipment to play on. Sure, you may get a recording contract, but you lose the rights over your own music, and if something written is not liked, it is changed and you have no control over it.

By the beginning of the 1980s, the Ministry of Culture admitted that there were 70,000 rock bands in the Soviet Union. Of these only 145 were rated “professional,” that is, were allowed to tour and occasionally make a record. Former General Secretary [Konstantin] Chernenko took the time in his short term of office to denounce rock music as, “the attempt of our enemies to exploit the psychology of Russian Youth.” But now, with Glasnost comes Rocknost. The authorities are at least tolerating what Kino is up to. Kino has retained their underground status and the freedom over their own music by refusing to sign with Melodiya. At the same time, they have managed to independently record their own cassette and distribute it throughout the Soviet Union and a small part of the U.S. It seems ironic that they often appear at the top of the official Soviet rock charts, while they themselves are unofficial. Being able to see Kino perform in Park City was as rare for Utahns as it was for them to be able to do so. No wonder it was a sell out.

Here are some more concert reviews from SLUG’s early days:
fIREHOSE: Best of the Shows 1989
Verbal Assault—Twice As Nice