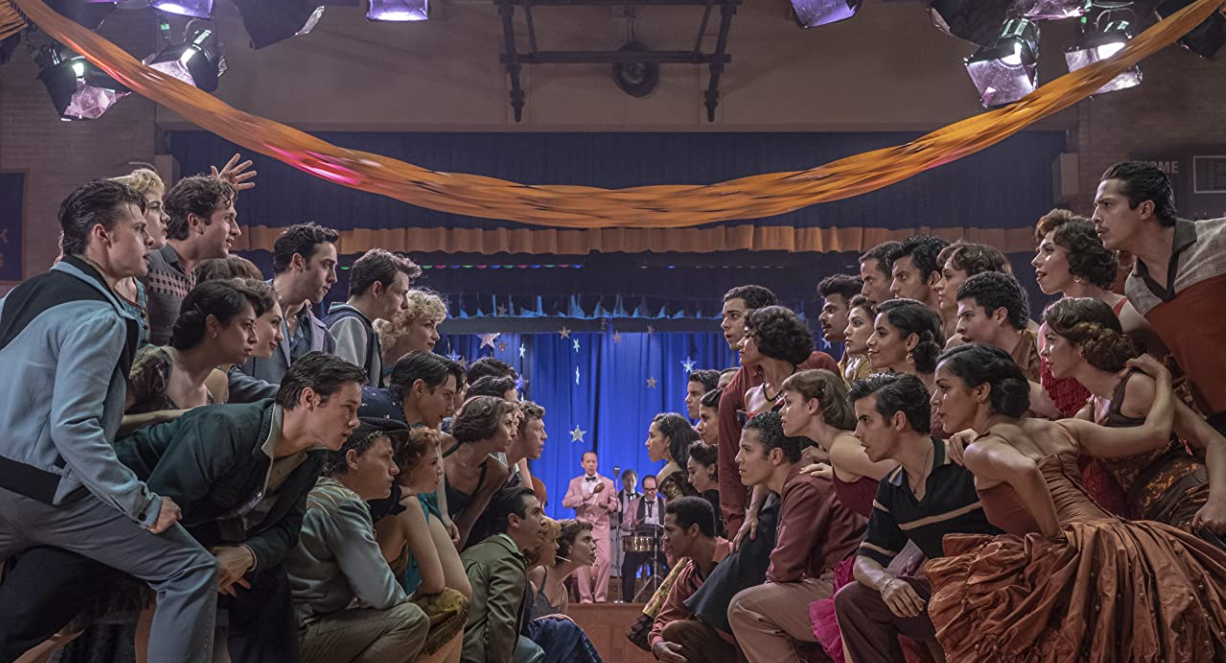 There’s an understandable distaste for remakes among critics and audiences of late—a feeling that if you’re going to make something again, you’d better either bring something new or at least execute incredibly well. In the case of Steven Spielberg’s long awaited take on West Side Story, the fact that he achieves the latter is nearly undeniable. But what about the former?

West Side Story is of course the classic musical by Leonard Bernstein and the late Stephen Sondhiem inspired by Romeo and Juliet. The story centers around two rival gangs, the white American Jets and the Puerto Rican immigrant Sharks, fighting over turf in the upper West Side of New York City. The tension between the two gangs reaches a boiling point when an unexpected romance is thrown into the mix as prominent former Jet Tony (Ansel Elgort, Baby Driver) falls head-over-heels in love with Shark leader Bernardo’s (David Alvarez) younger sister, Maria (Rachel Zeigler). But, the course of true love never runs smooth, even in a musical.

Spielberg’s expert staging and deft hand behind the camera make West Side Story a visual feast and an exuberant experience. In scoring the opening sequences with both the music and rhythms of the bustling city, Spielberg immediately ups the sense of reality. The performances—from actors who are actually ethnically appropriate for their respective roles this time—are all first rate, and screenwriter Tony Kusnher’s adaptation of the original book by Arthur Laurents adds a topical edge to the material that improves it without being revolutionary.

These additions include the element of gentrification that increases our sense of who has a foothold on what remains and more backstory to Tony’s character that fleshes him out and makes him more interesting. Most noticeably, Kushner and Spielberg have replaced Doc, the owner of the drugstore where Tony works, with Valentina (Rita Moreno, who won an Oscar for her portrayal of Anita in the original film), a Puerto Rican immigrant who has been accepted into the neighborhood after her marriage to a respected white person in the community. They’ve also chosen to portray Anybodys (Iris Menas) as a transgender character played by a non-binary performer, which makes a lot of sense for the character.

The minor changes to the structure and placement of some songs are also effective, and the dialogue has been given a modern sensibility that does include some harsher language. Though, Spielberg and Kushner wisely choose not to lean too heavily on the profanity so as to avoid the mistake of adding some swears and calling it art.

The gangs feel less square and more like actual teens. Spielberg makes the knife fight between Bernardo and Riff (Mike Faist of the Dear Evan Hansen original Broadway cast) work by not doing it as a full-on dance number but recognizing that a stage fight is just a dance. Spielberg shoots in a way that allows it to be both. Elgort is terrific as Tony, as is Faist as Riff, but Zeigler, Ariana DeBose (Hamilton, Schigadoon!) and Moreno are all absolutely spellbinding. The cinematography by Januz Kaminski and production design by Adam Stockhausen (The French Dispatch) are simply gorgeous, and editor Michael Kahn is still among the best that ever lived.

West Side Story is the best argument for big-screen moviegoing experiences since Dune, and I felt transported to the days of seeing movies in one-screen movie houses. It’s essentially the same West Side Story with a more nuanced and timely vision that corrects some big missteps. Even as an obsessive Spielberg fan, this one exceeded my expectations by a wide margin and ranks among the best major films of the year. –Patrick Gibbs