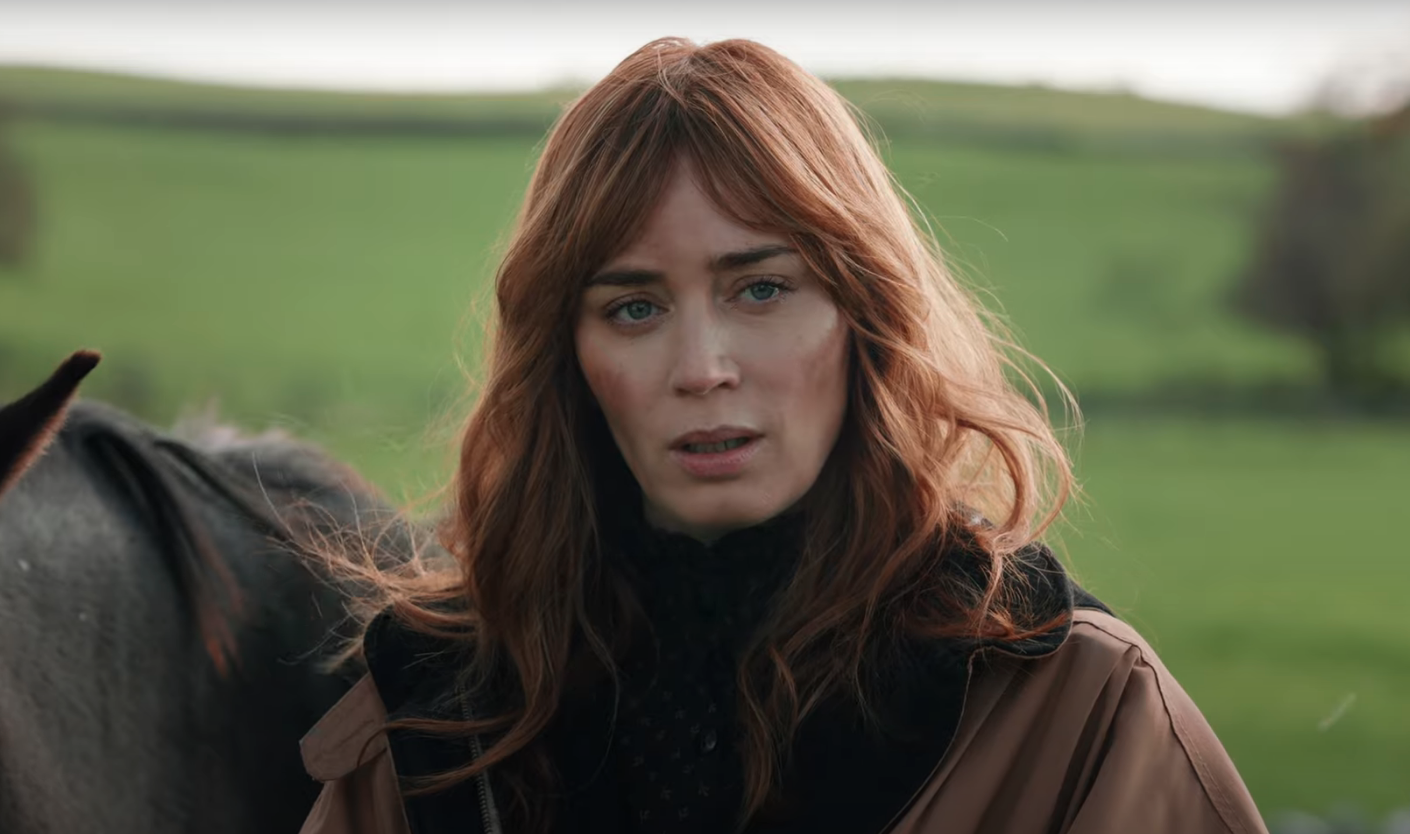 Mar-Key Pictures
In Theaters and Streaming on Video Demand” 12.11

It’s hard for me to write about anything made by John Patrick Shanley, the man who wrote Moonstruck and Doubt, without reflecting upon his eclectic career. And by that I mean: What the hell was up with Congo? I’m aware that it’s been 30 years, but I have not yet even begun to heal from that experience, or to comprehend what happened, other than to postulate the theory that Shanley wrote a deliberately and dumbfoundingly awful draft of the script and presented it to  director Frank Marshall as a joke, and Marshall was too nice and too grateful to have a prestigious writer of Shanley’s stature attached to the project to say anything.

Wild Mountain Thyme is Shanley’s third film as writer-director, after the cult classic Joes vs. The Volcano and the Oscar bait adaptation of Doubt.  This is another adaptation of one of his stage plays, a lesser-known work called Outside Mullingar. It’s probably more reminiscent of Moonstruck than anything else, but this time celebrating Irish clichés instead of Italian.

Headstrong farmer Rosemary Muldoon (Emily Blunt) has had her heart set on winning the love of her oddball neighbor, Anthony Reilly (Jamie Dornan, 50 Shades of Gray), since childhood. The problem is that Anthony seems to have inherited a family curse, and remains oblivious to his beautiful admirer. Meanwhile, Anthony’s father (Christopher Walken) fears that his son will never get married,  and announces his intention to sell the farm to his American nephew (Jon Hamm) in order to ensure that it stays in the family for generations.

When the first trailers for Wild Mountain Thyme came out, they were badly received. Particularly so in Ireland, where the perception was that it was just a festival of stereotypes and phony accents. I can’t say that they are wrong, per se—there are no leprechauns, but most everything else is there. The majority of the actors are in fact Irish and don authentic accents, but then there’s the matter of Christopher Walken. It’s honestly very difficult to judge his accent fairly, because to say that we know what he sounds like without it is a giant understatement: We’re talking about arguably the most distinctive and overly imitated presence in Hollywood. But whether it’s an entire authentic accent, it’s a consistent one, and the performance as a whole may be his best since Catch Me If You Can.

The strongest performance overall is by far the biggest surprise: Dornan, who has been less than impressive in most of his American films, is a very charming presence here, playing a role that’s about as far away from Christian Gray as you can get. He’s very much at home in light comedy, and I really hope that he’s able to break free of the bonds of the 50 Shades series (pun intended) and show that he can actually act. It goes almost without saying that Emily Blunt is good in the film, though as a devoted fan, I have to qualify that it’s not exactly standout work that will be on anyone’s list of her favorite performances, unless it’s the only one they see.

Shanley the director and the film’s MVP,  cinematographer Stephen Goldblatt (Batman Forever, The Help), take full advantage of the lush, green Irish countryside to give us some really beautiful images, and more than anything else, that sense of beauty will linger long after you’ve completely forgotten that the film even exists. Shanley the writer is inconsistent, with dialogue and situations that range from delightfully quirky to insufferably and self-consciously quirky, leading up to a reveal about Anthony that starts out feeling like the basis for a Saturday Night Live sketch and is then just kind of pushed into the background because it’s too weird to develop in any kind of meaningful way.

Wild Mountain Thyme is a pleasant diversion, and it’s just cute and charming enough to overcome its flimsy storytelling most of the time, and the scenery and music are reason enough to see it. Shanley’s love of his ancestral homeland is infectious, even if it does feel like an Americanized view of it. It’s a sweet and entertaining little film tp approach with low expectations, and I liked it, but didn’t love it like I wanted to. If anything, it’s only going to further Shanley’s reputation for inconsistency as an artist.  –Patrick Gibbs