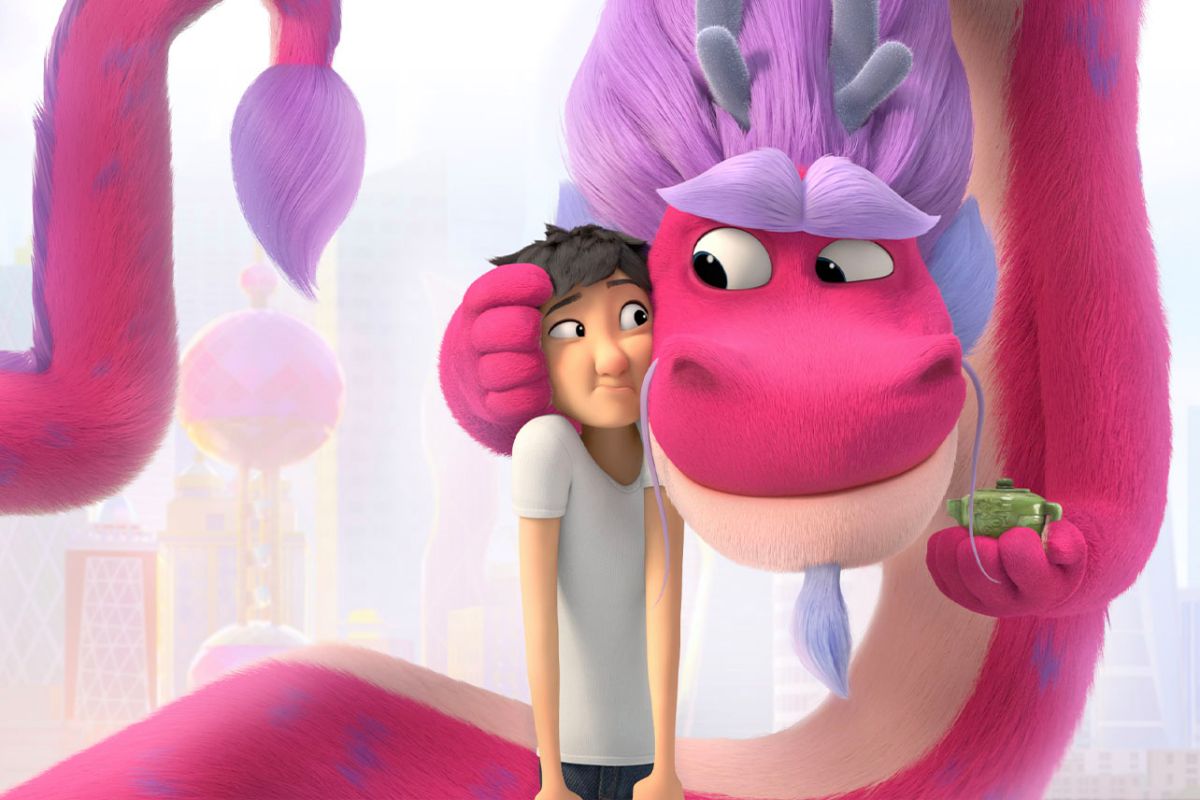 There are certain types of films where you have to keep context firmly in mind while watching them. That’s whether it’s when they were made or who they were made for, as it makes a difference on our ability to give them a fair shake. Wish Dragon, the new Sony Animation release that is premiering on Netflix, was produced by Jackie Chan as an animated film set in China and for Chinese audiences, with the American version being a priority, but secondary to the release in China.

Wish Dragon is the story of Din (voiced by Jimmy Wong, John Dies at the End, Mulan (2020)), a working-class college student with big dreams but small means who finds a magical teapot that unleashes a Wish Dragon named Long. Chan voices Long in the Chinese version, and John Cho (Star Trek, Searching) in the American one. Long is a deeply cynical but magical dragon capable of granting wishes, set off on an adventure through modern-day Shanghai in pursuit of Din’s long-lost childhood friend, Lina (Natasha Liu Bordizzo, Crouching Tiger, Hidden Dragon: The Sword of Destiny).

Lina left their working-class neighborhood when her father’s career success took them to the big city when she was young. In the film, she’s now a famous actress and model. Their journey forces them to answer some of life’s biggest questions—because when you can wish for anything, you have to decide what really matters.

Writer-director Chris Apelhans, who worked in the art department on films ranging from Monster House to The Princess and the Frog, first came up with the concept of Wish Dragon when he visited China in 2006. The press release states that the story is “based on an old Chinese fable which inspired Aladdin.” That’s all well and good, but to say that it wears the influence of the Disney version of that story on its sleeve is to put it mildly indeed, with Long’s attitude and antics reminiscent of Robin Williams and sequences that feel shamelessly lifted from that film both in dialogue and content. That said, the final section of the movie does offer a meaningful twist that gives it more of its own identity, and the kung fu action is a lot of fun.

Sony originally planned to release the film theatrically under the Columbia banner, but one major advantage of it going straight to Netflix is that you can watch either the English or the original Mandarin, so you can choose between Chan and Cho, both of whom are entertaining in the role. If you’re watching the English one, Cho really gets a chance to show off his comic skills here, and while he is not Robin Williams (no one is), he makes a more lovable variation on the character than Will Smith did. On the whole, I have to say that for me, Wish Dragon came a lot closer to recreating the magic of the Disney classic than Guy Ritchie’s live-action film was able to.

My 5 year-old nephew, Timmy, who is my co-critic when it comes to children’s films, really had fun with it. But the part of me that cares more about his cinematic education than about keeping him occupied while babysitting him and his 2 year-old brother wouldn’t have shown him this before Aladdin if I’d known that Wish Dragon would act as something of a spoiler. On the plus side, whether it’s intentional or not, Wish Dragon incorporates a sweet mother-son dynamic much like the one that was famously cut from Aladdin. Constance Wu (Crazy Rich Asians, Hustlers) is great as Din’s nagging but loving Mom.

If you’re looking for energetic, colorful fun, and you enjoy over-the-top kung fu–stunt action—even in cartoon form—then you may enjoy Wish Dragon. And if you’re just looking for something new on Netflix with cute animation that you can stand watching with the kids, if nothing else, it’s a whole lot easier to get through than abysmally scripted Dog Gone Trouble. So you could certainly do worse. –Patrick Gibbs