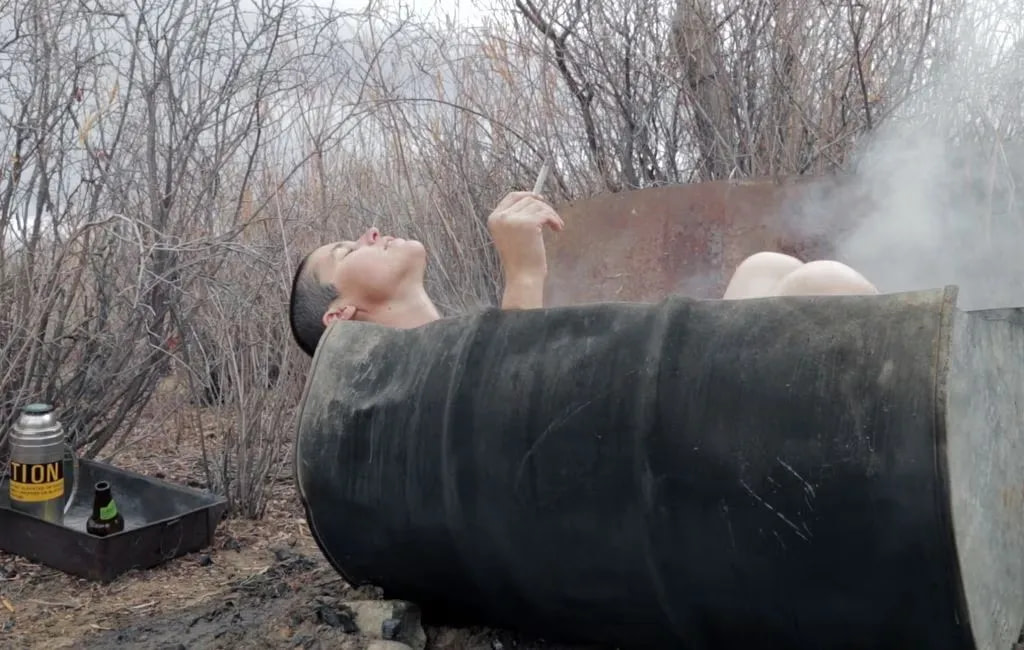 To the traveling Subaru on its way to Arches National Park, Cisco, Utah is an entirely unremarkable blip off the I-70. For Eileen, this ghost town is the promise of a new life away from mainstream society. For filmmaker Emily Kaye Allen, the everyday experiences of this queer individual are an intriguing story of self-discovery. Eileen and Cisco soon became the subjects of Allen’s first feature film, Cisco Kid, a documentary feature in competition at this year’s Slamdance Film Festival. Shot on four trips over about three years, Allen’s film shows time pass and the progression of Eileen’s life in Cisco.

Allen, former Utahn (and SLUG photographer!) and now Brooklyn-based director, has an easy-going poise. Since leaving Utah over 15 years ago, she heard about Eileen’s story from a friend. Suddenly she found herself drawn back to Utah, this time having fresh eyes alight with creative appreciation.

Cisco Kid’s journey from idea to Slamdance 2023 feature film took quite some time. Allen was drawn to filmmaking with part interest and part naïveté, hoping it might lead to greater employment opportunities. With roots in photography, especially landscape, she found documentary filmmaking naturally more approachable: “It seemed like an extension of photo in some way,” she explains. The smaller budget and more DIY elements of documentary filmmaking also appealed to her. “Coming from a photo background, I kinda like things that are a little more simplified and a process that I could, in theory, do all on my own,” says Allen.

“Yes, Eileen is very much on their own, but they still end up making community in a way you don’t expect.”

When Allen first wanted to tell Eileen’s story, she intended to make a film but was open to the potential for a photography project instead. After the first visit, she knew her gut was right. “This landscape is so unique—Eileen is so unique. And a lot of that is stuff they’re saying, how they move and their energy and the stillness of the landscape—all that I felt would’ve been a lot harder to communicate through photographs,” Allen says.

Cisco Kid is Allen’s take on vérité, also referred to as direct or observational cinema. This style emphasizes realism or naturalism in its subject matter, a fly-on-the-wall camera simply following whatever person or event it’s filming. However, this film didn’t end up as a pure vérité because Allen’s presence can be felt in the moments where Eileen talks to her. This unplanned result is something Allen had to be open to, a life lesson in filmmaking: “Something definitely will happen that you were not prepared for … so it’s good to be flexible.”

Choosing to film a vérité-style documentary also meant Allen and Eileen spent a lot of time together. “It was a very intimate filming experience,” says Allen, one that was very rewarding but had its challenges. “There’s always a constant conversation with whoever you’re filming because one day they feel okay about it and the next day they might not be in the best mood,” she explains. “It’s a very vulnerable experience [to be filmed] and I think there are power dynamics that are inherent in holding a camera … it’s always something that’s ongoing as a documentary filmmaker.”

“This landscape is so unique—Eileen is so unique. And a lot of that is stuff they’re saying, how they move and their energy and the stillness of the landscape.”

Allen brought this same level of interpersonal care to the film’s other major character, the landscape of Cisco. It’s clear that the landscape in Cisco Kid is just as much a character as Eileen, a subject whose mood would often shift. “I was responding a lot to the landscape in how I chose to film it,” Allen says. The desert of Utah is vast, wide open and dominated by sky; As the sun moves, “the sky completely transforms the landscape throughout the day.” With this story, and most of Allen’s other projects, this location served as the starting point for the narrative: “I generally tend to be interested in a place first, or at least as a container to an idea … Ideas can be so broad, so this kind of contains the project for me,” Allen says.

Though this film is primarily observational, Allen’s creative touches and artistic eye are undeniable, moving this story beyond fact to art. This is especially seen with the juxtaposition of both characters: “Eileen’s a very energetic and spontaneous person, but the landscape’s a very still landscape,” explains Allen. With lots of wide, static shots and extended clips, Allen creates quiet moments in the film which contrast Eileen’s animated presence.

“You see how Eileen would shape the landscape and how the landscape shapes Eileen,” says Allen. A big part of the narrative arc for Cisco Kid is time, as this 84-minute film takes place over three years. “I really wanted to show time pass[ing]; that’s why I went back over different seasons.”

“I was responding a lot to the landscape in how I chose to film it.”

Though not intended, in many ways this film serves as a foil of the American West and films of the kind. Big parallels, such as the desire for property, rugged individualism and isolated landscape, are all here presented in a different light. “Yes, Eileen is very much on their own, but they still end up making community in a way you don’t expect,” says Allen. The film shows a connection developed between Eileen and Farlan, a woman also living off-grid in the La Sal Mountains, and another guy named Joe. “There’s still community there—it’s not a big community but Eileen’s still meeting people … they still are getting help and advice from people,” says Allen. Instead of celebrating one’s ability for self-sufficiency, Cisco Kid identifies the value of establishing community in unexpected ways.

Of course, Eileen as a subject is very different from most films about the West. “Often, the story of the American West is centered around straight white men. But Eileen is nonbinary, queer and kind of young,” says Allen. It disrupts, or “queers,” the usual narrative with one that is perhaps closer to the truth.

Cisco Kid offers a fresh admiration for the beauty to be found inhabiting those desert spaces we mostly speed past on the freeway. If you can, make your way up to Park City to catch this feature. You can learn more at slamdance.com/festival/.